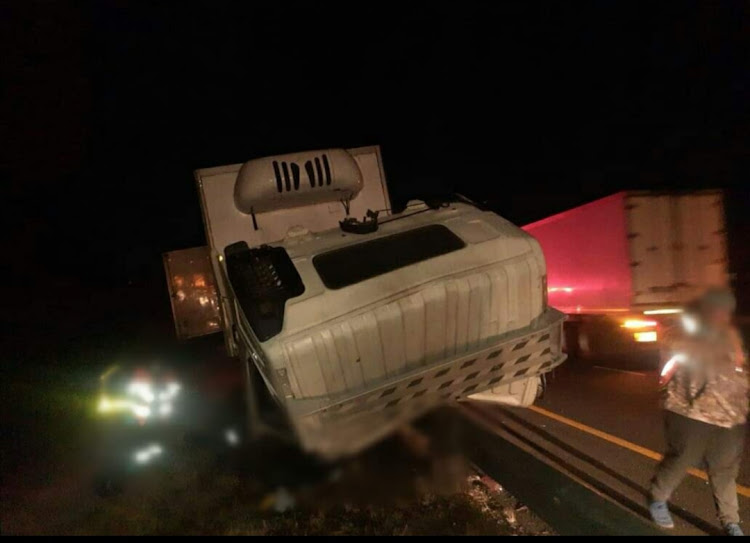 The scene on the N3 near Van Reenen's Pass on Wednesday night.
Image: Emer-G-Med

A man who hitched a ride on the back of a heavy-duty vehicle unbeknown to the driver, was killed when another truck crashed into them on the N3 highway near Van Reenen's Pass on Wednesday night.

“On arrival on scene on the Johannesburg-bound carriageway, in the vicinity of Van Reenen, paramedics found two articulated vehicles had collided.

“One of the vehicles rear-ended the other, causing the driver to lose control of his vehicle which careened off the roadway, smashing into the barrier. The driver was found to have sustained fatal injuries and was declared deceased on arrival.

“On further inspection, a second male was found pinned between the two wreckages.

“Reports from the scene suggest the man to have been truck surfing at the time of the collision — an act where pedestrians climb onto the rear of heavy-duty vehicles and hitch rides without the driver of the vehicle knowing.”

Van Reenen said the man was also declared dead at the scene.

“The roadway remained closed for several hours to allow emergency services to clear the scene and the SA Police Service to conduct the necessary investigations.”

Two tow truck operators, attending to a broken-down heavy-duty vehicle, were killed when a second truck mowed into them on the N2 freeway near ...
News
1 year ago

Seven people were killed and 10 injured when a truck and a taxi collided on Cape Town's west coast road on Tuesday.
News
1 year ago

A truck driver died after he crashed a heavy goods vehicle on a Durban flyover before being flung onto the busy highway below.
News
1 year ago