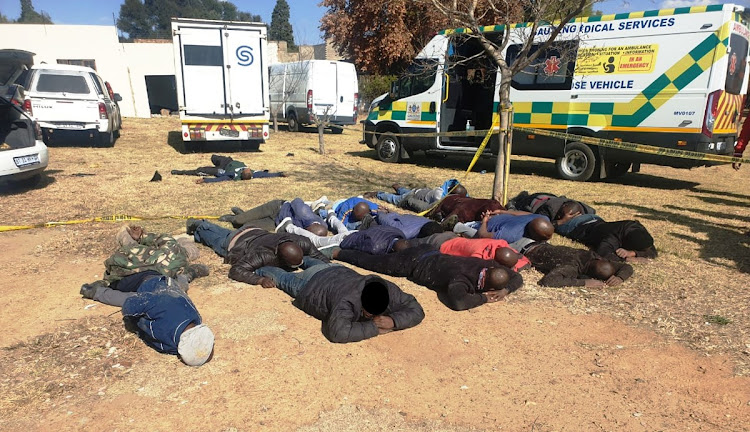 Some of the 23 men arrested after police foiled a truck heist in Midrand on June 25 2021.
Image: SA Police Service

Four suspects died in a shoot-out with police and 23 others were apprehended — four of whom were injured.

Eight men suspected of being part of a syndicate that hijacks trucks in Gauteng were arrested on Tuesday.
News
7 months ago

“As the team entered the  premises in President Park, Midrand, they were met with gunfire from some of the suspects armed with rifles and handguns.

“There were 27 suspects on the premises. Four suspects were shot and killed while four others were wounded. A total of 23 suspects, including the four wounded suspects, are under arrest.”

Naidoo said the “team seized three rifles including an AK-47 rifle, a  Dashbrown rifle, a R5 rifle as well as two pistols at the scene. The team further confiscated 15 vehicles at the scene of which four were either hijacked or stolen in the areas of Garsfontein, Silverton, Wierdebrug and Olifantsfontein.”

He said the wounded suspects were taken to hospital under police guard.  The other 19 suspects have been detained on charges of attempted murder, conspiring to commit armed robbery, unlawful possession of firearms and ammunition and possession of vehicles suspected to be stolen.

“The work done by this multidisciplinary integrated team today is a very significant contribution to our efforts to curb organised crime in the country”, said Sitole.

Free State cops have arrested a police clerk and two other suspects for allegedly hijacking a truck, as well as for armed robbery and kidnapping.
News
7 months ago

Crime stats: Property and contact crimes plus CIT heists are down

Police minister Bheki Cele said the police service is making strides in the fight against crime as provinces have reported declines in various ...
News
8 months ago

After claiming a false hijacking, the truck driver sold the chicken portions he was supposed to have been transporting for his employer.
News
8 months ago