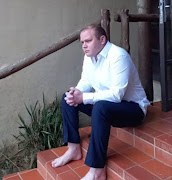 Image: supplied by LieTech Polygraph & Forensic Services George Vorster outside his chalet at Didima Resort in the Drakensberg. He was getting ready for his wedding when police pounced on him.

What should have been the happiest day of his life turned out to be the worst for bridegroom George Vorster, when the police pounced on him less than an hour before he was due to walk down the aisle.

Vorster, who had been getting ready for his wedding to a Dutch Reformed minister at Didima Resort in the Drakensberg, faces fraud charges.

One of the charges relates to Vorster allegedly defrauding the Dutch Reformed Church in Escombe, Durban, of R1m.

KwaZulu-Natal police spokesperson Col Thembeka Mbele confirmed that 31-year-old Vorster was arrested for fraud after a warrant of arrest had been issued.

“He appeared in the Pinetown magistrate’s court on June 22. The suspect is appearing again in court today [Monday]," she said.

LieTech Polygraph & Forensic Services had been tracking him since a client approached the company with a complaint that Vorster had allegedly swindled about R1.4m from him.

Rhyno Lombaard of LieTech Polygraph & Forensic Services told TimesLIVE on Monday that Vorster's alleged modus operandi was to defraud companies that had trusted him to pay import and export taxes on their behalf by not paying the full amounts.

He confirmed that Vorster was expected to apply for bail in the Pinetown magistrate's court on Monday.

On the day of the arrest a week ago, LieTech Polygraph & Forensic Services, Det-Const Thabiso Gcumisa and Det-Sgt Denver Govender of the SAPS Pinetown detectives unit arrived at the wedding venue.

They found him in his room getting dressed while his bride-to-be was having her hair and makeup done ahead of the ceremony.

Vorster was taken into custody before he could say his wedding vows.