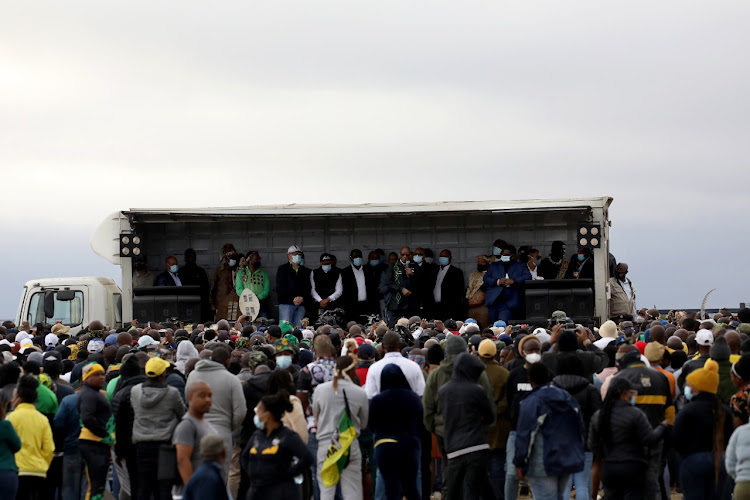 The SA Police Service announced on Sunday that it had “enhanced” its deployment of “security forces” in KwaZulu-Natal as large crowds flocked to Nkandla, in defiance of lockdown regulations.

The national joint operational and intelligence structure (NatJOINTS) said in a statement on Sunday afternoon it had enhanced its operational capacity in the province.

The statement came after, earlier in the day, it appeared officers stationed in northern KwaZulu-Natal were unable to hold a roadblock to prevent convoys of defiant supporters of former president Jacob Zuma from descending on his homestead.

Reporters covering an evolving situation at Nkandla reported crowds of people, many without masks, including Zuma and his son, marching together. They reported that supporters also fired firearms mere metres away from Nkandla, an indication that some supporters were armed.

NatJOINTS spokesperson Brig Vish Naidoo said the enhancement of the security forces was in response to incidents “in which people are seen to be undermining the authority of the state, including the flouting of the DMA [Disaster Management Act] regulations”.

He said that during the deployment, SAPS commanders and members on the ground have been provided clear and concise directives that responses to any and all situations “must be informed by proper analysis”.

“To this end, every situation will be assessed and dealt with on its own merit. In situations where any operational response by the security forces may potentially result in injury and/or loss of life, a criminal case or cases will be opened against those that have created such situations and criminal action will be instituted against such persons,” said Naidoo.

He said people should be reminded that SA is still under adjusted alert level 4 lockdown rules.

“If we are to see a slow down in the spread of the virus, all citizens of the country are urged to strictly adhere to the Disaster Management Act regulations and failure to do so, including any person organising or being part of gatherings will also result in people being fined or jailed or both,” he said.

The SA National Defence Force said that the deployment of security forces did not include the military.

“The SANDF will not send any troops there. There are procedures which must be followed for the deployment of the SANDF. At present no such request has been received,” said SANDF spokesperson Brig-Gen Mafi Mgobozi.

Earlier on Sunday, acting health minister Mmamoloko Kubayi said she was worried about the “after effect of [the] Nkandla gathering with the current variant”.

“After the Pretoria march, court protest in Joburg and marches in Soweto, we saw numbers surge to above 26,000 last night,” she tweeted, referencing the fact that Gauteng was the epicentre of the virus, accounting for more than 16,000 of the more than 26,000 new cases recorded in the preceding 24 hours.

The SA National Defence Force (Sandf) has rubbished claims that it has deployed soldiers to Nkandla to confront supporters of former president Jacob ...
Politics
4 months ago

SACP general secretary Blade Nzimande has warned against the incitement of civil war, as often chaotic scenes played out in Nkandla this week.
Politics
4 months ago

Former president Jacob Zuma made his first public appearance in Nkandla on Saturday, shortly after his son, Edward, vowed there would be bloodshed to ...
Politics
4 months ago

Political tension was palpable at the homestead of Jacob Zuma yesterday as amabutho (Zulu warriors) and 24 members of the Umkhonto we Sizwe Military ...
News
4 months ago