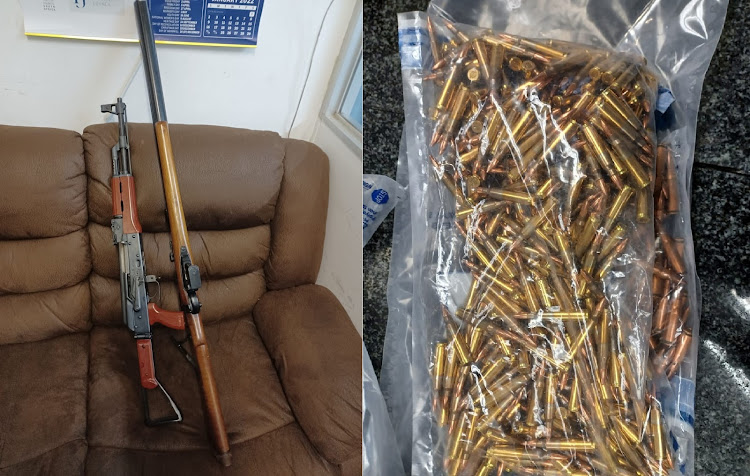 Two rifles and more than 5,000 rounds of ammunition were some of the items discovered during a raid at a business premises in Mayville last month.
Image: SAPS

The matter against five men accused of unlawful possession of firearms and ammunition as well as possession of suspected stolen property was withdrawn in the Durban magistrate's court on Monday.

Among the five accused was Farhad Hoomer, once accused of having links to terror group Islamic State.

Hoomer, Mohamed Akbar, Nufael Akbar, Tariq Hamid, and Ikkram Khan were arrested on June 25 after a raid at a business premises in Mayville.

Police spokesperson Col Thembeka Mbele said a search warrant was obtained for the Mayville residence after police followed up on information about a house that was broken into in Scottburgh, on the KZN south coast.

Mbele said various items that were stolen from the home were found at the Mayville residence.

“A search warrant was obtained and the team proceeded to the Mayville residence as information indicated that the stolen items were on the premises. A search warrant was executed and more than 5,000 rounds of ammunition, a Norinco AK-47 rifle, seven cellphones, two magazines, another rifle as well as diamonds and jewellery were seized.”

A voice sample submitted by a Durban businessman accused of a series of 2018 terrorist-related firebomb attacks at a popular retail outlet came under ...
News
1 year ago

The accused, aged between 23 and 47, were placed under arrest and made their first court appearance on June 28.

Natasha Kara, director of public prosecutions (DPP) KZN spokesperson, said the state concluded there was insufficient evidence to keep the matter on the court roll.

Investigations are expected to continue.

In October 2018, Hoomer and 11 other men were arrested during a raid co-ordinated by the Hawks after a series firebomb terrorist activities at Woolworths stores and at the Durban July horse racing event that year.

The men also faced various other charges‚ including murder‚ attempted murder‚ arson and extortion. They were accused of being aligned to terror group Islamic State, with Hoomer allegedly orchestrating the Imam Hussain Mosque attack in May 2018 which resulted in the death of Verulam mechanic Abbas Essop.

After a year and nine months of numerous court appearances, the matter was stuck off the roll in the Verulam magistrate's court.

Members of the prosecution team said at the time they had every intention to finalise investigations and approach the DPP to get the authority to prosecute and place the matter back on the roll.

The family of Shaheed Abbas Essop, who was gruesomely murdered in an attack at a mosque outside Durban, have been left distraught after the 12 ...
News
1 year ago

A Durban businessman accused of terrorist-related activities and having links to the Islamic State, has been ordered to provide the state with ...
News
1 year ago

A Muslim cleric‚ who is among those accused of orchestrating the bloody Verulam mosque attack in May and an Isis-inspired wave of bombings in the ...
News
3 years ago