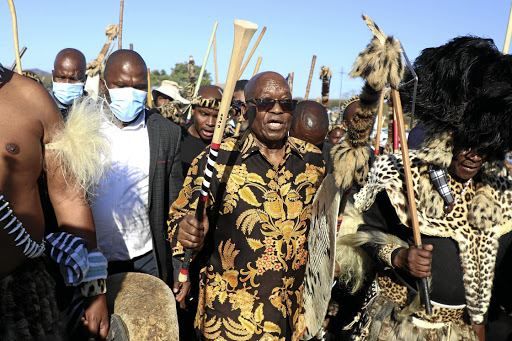 Jacob Zuma walks alongside Mgijili Nhleko, right, an induna and commander of the Zulu regiments, outside the former president's home in Nkandla, KwaZulu-Natal.
Image: Ilanga

“The minister of police is convinced that if the situation in Nkandla was handled differently it could have resulted in a very violent situation.”

These are the words of police ministry spokesperson Lirandzu Themba, who has hit back at claims the SA Police Service did not act against the mass gathering at Nkandla.

Scores of former president Jacob Zuma's supporters gathered outside his Nkandla homestead in KwaZulu-Natal over the weekend.

Many in attendance said they were there to “protect” the former president after the Constitutional Court found him guilty of contempt of court and sentenced him to 15 months in prison.

Speaking on SAfm, Themba said the SAPS did not act against the mass gathering to “avoid bloodshed”.

“Over a hundred people were armed at that gathering,” said Themba.

She said the police were investigating and studying video footage, and those responsible for the gathering would be brought to book.

The video footage will be gathered from 20 cameras and by working with TV stations.

“What has been said and what we have been informed is that accountability is going to be the order of the day as soon as this investigation wraps up,” said Themba.

“There are going to be consequences and arrests, but we just have to wait and see who is going to be arrested. Organisers of the event have to be brought to book.”

Speaking at the SAPS Covid-19 vaccination drive launch in Orlando, Gauteng, minister Bheki Cele applauded the police for their conduct at Nkandla.

“I want to congratulate the police for the way they behaved at Nkandla,” said Cele.

He said they were aware of the protesters who had guns but did not act against them to save lives.

“Police knew that and had that information. They tried to provoke police by shooting those firearms in the air. There were many women and many children, and police had to take a step back,” said Cele.

“We had to absorb those insults and complaints. The SAPS has learnt through Marikana and we don't want to go back there.”

The EFF said the conduct of law enforcement demonstrated they had an effective crowd management strategy.
Politics
1 year ago

Police had learnt a lot from Marikana and used "suggestions" from the resulting Farlam commission, minister Bheki Cele said on Monday.
News
1 year ago