'The snakes are his kids': Slithery surprise for Faith Mazibuko in mall parking lot

“The owner said he is a sangoma,” said the spokesperson for the Gauteng community safety MEC 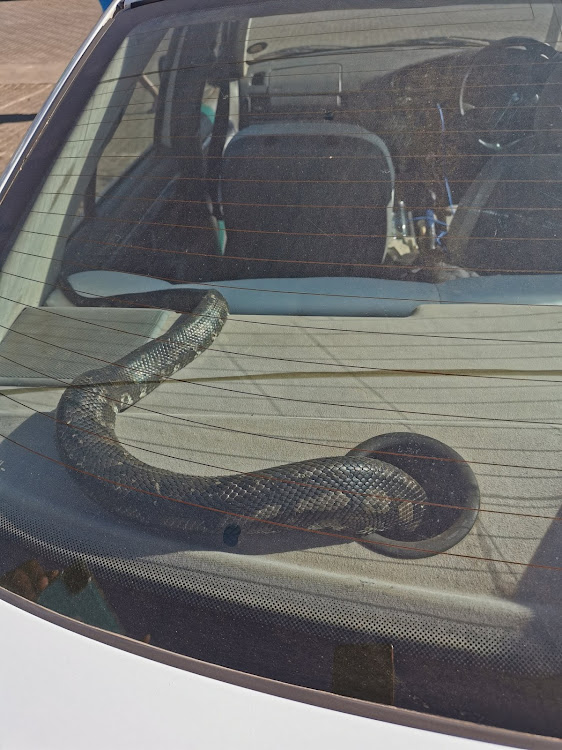 "Yoooo…the snake almost came out of the window at the parking lot in Evaton Mall"
Image: Faith Mazibuko via Twitter

Gauteng community safety MEC Faith Mazibuko and her support staff had a slithery surprise in a mall parking lot on Monday — not just one but two snakes in a car.

Mazibuko posted a picture of a snake trying to get out of a parked car at Evaton Mall.

“Yoooo ... the snake almost came out of the window at the parking lot in Evaton Mall,” she tweeted.

Her spokesperson Pinkie Numa told TimesLIVE on Tuesday morning that the MEC had just finished working in Sharpeville and the next stop was for Mazibuko to pay her last respects to the family of the late community policing  forum chairperson, Ntante Mhlambi.

“She had to wait for the provincial CPF chairperson and the district police, who were also going to pay their respects, so she waited at the Evaton Mall parking lot.

“A white BMW parked, not far from the MEC's car, and the owner got out.

“One of the windows on the car was slightly open. One of the officers who is part of the MEC's protective detail saw the snake trying to get out. The owner went back and closed the window, but left the car unlocked,” she explained.

The officers told Mazibuko about the snake and she subsequently took the picture.

“When the owner came back to the car he was asked if he had a licence for the snake, and he said he did at home and offered that we could go with him to see the licence.

“The owner said he is a sangoma, the snakes are his kids. There were two snakes in the car,” Numa said.

"The snake hitched a free ride. Covid-19 has hit hard and there is no money," joked one social media user.
News
6 months ago

A boy who was bitten on the face by a spitting cobra was resuscitated in a rural hospital and saved by an antidote.
News
6 months ago