Police air wing on standby for possible deployment to Nkandla

According to well-placed SAPS sources, members of the air wing unit are on standby in Empangeni, about 130km from Jacob Zuma's homestead 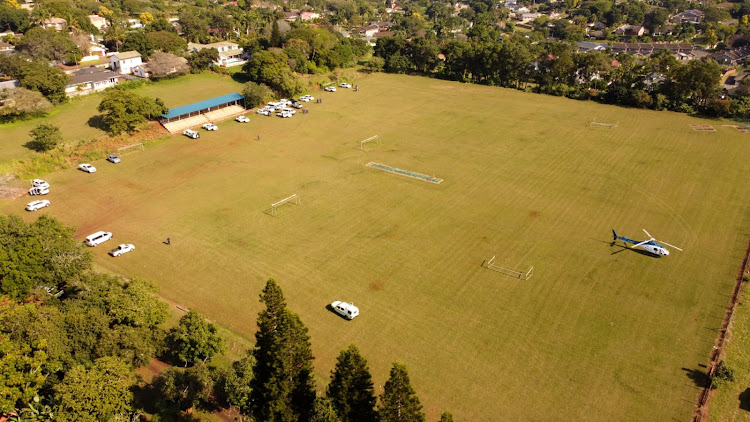 The KwaZulu-Natal SAPS air wing unit has been placed on standby in Empangeni for a possible deployment to Nkandla, according to well-placed police sources.
Image: Supplied

The KwaZulu-Natal police's air wing unit has been placed on standby for possible deployment to Nkandla.

According to well-placed SAPS sources, members of the unit are on standby in Empangeni, about 130km from former president Jacob Zuma's homestead.

A police helicopter, as well as a number of vehicles, have been stationed on a rugby field at Empangeni high school since Monday after unrest in Nkandla at the weekend, when hundreds of Zuma supporters descended on the homestead - some of them firing shots into the air.

National and provincial police did not immediately respond to a TimesLIVE request for comment.

Meanwhile, various police units, including Durban and Empangeni public order police, have been patrolling the vicinity of KwaNxamalala, where Zuma's compound is situated.

Should he fail to ensure former president Jacob Zuma is arrested by midnight on Wednesday, Cele could face a possible contempt of court charge ...
News
3 months ago

The bolstered police presence comes ahead of Bheki Cele's visit to the region.

Cele's spokesperson Lirandzu Themba could not confirm or deny if the minister would be heading to Nkandla, only saying that he was in the province.

The situation in the area was calm on Wednesday.

Cele was mandated by the Constitutional Court to ensure Zuma was taken into custody by the end of Wednesday to begin serving his 15-month jail sentence for contempt of court.

Cele has since said, through the state attorney, that the police would not affect an arrest due to various legal challenges the former president has since launched in the Constitutional Court and in the high court in Pietermaritzburg — unless the ConCourt gave clarity and ordered otherwise.

By Wednesday afternoon there was no indication that the apex court had responded.

Readers weigh in on whether the police should have done more to enforce the law outside Jacob Zuma's Nkandla home at the weekend.
News
3 months ago

The police ministry says it will wait for a directive from the Constitutional Court on whether to arrest former president Jacob Zuma.
News
3 months ago