'The suspect was initially warned about the gathering and he was subsequently arrested after ignoring the warning,' said police spokesperson Brig Vish Naidoo. 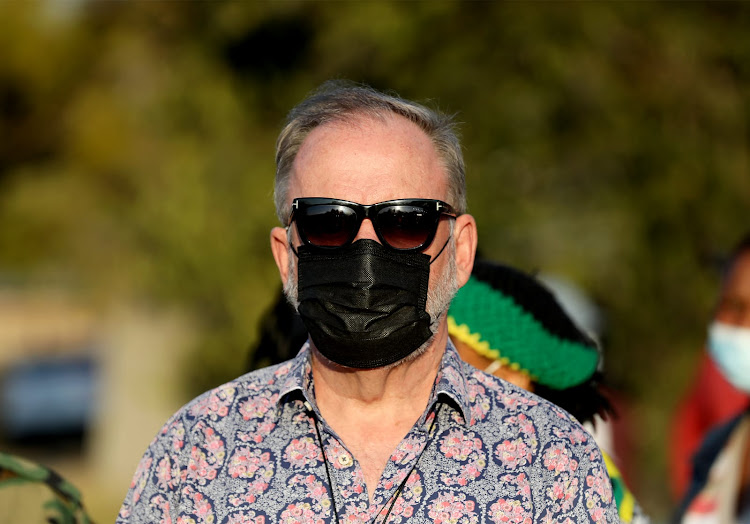 Jacob Zuma supporter Carl Niehaus was arrested outside the Estcourt prison on Thursday for contravening lockdown regulations. He will have to pay a R3,000 fine or appear in court.
Image: Sandile Ndlovu

He was arrested on Thursday afternoon for breaching lockdown regulations.

Without mentioning him by name, national police spokesperson Brig Vish Naidoo said Niehaus was expected to pay the fine by August 6, “or appear in the Estcourt magistrate's court”.

Niehaus took to Twitter to confirm his release, which took place about 8pm.

“I have been charged, and must appear in court on August 8 2021. My utmost gratitude to all my comrades for your support,” he tweeted, his date differing from that of the police.

I have been released (around 8pm) from Escourt Police station. I have been charged, and must appear in court on the 8th of August 2021.
My utmost gratitude to all my comrades for your support. From the bottom of his heart, “thank you!.”

Niehaus — a staunch Zuma backer — arrived at the Estcourt Correctional Centre, where former president Jacob Zuma is incarcerated, shortly before 4pm. Outside the facility he began engaging with a handful of Zuma supporters.

After his short speech, Niehaus began conducting interviews with the media.

While speaking to the SABC in an interview that was being broadcast live, a number of police officers swooped in and whisked Niehaus off down the road.

Naidoo confirmed that the arrest was on charges related to the “breaking the lockdown regulations”.

Suspended ANC member Carl Niehaus has been arrested outside the Estcourt prison where #JacobZuma is being held. He was addressing supporters when police moved in to break up the illegal gathering. #eNCA pic.twitter.com/vwqTZUEevd

“The 61-year-old man is alleged to have convened a gathering of approximately 100 people outside the Estcourt prison at about 4pm ... The Disaster Management Act clearly outlines [that] gatherings are prohibited, except for funerals where not more than 50 people are allowed to attend.

“The suspect was initially warned about the gathering and was arrested after ignoring the warning. He is in police custody and likely to face charges in terms of the DMA regulations,” said Naidoo.

A TimesLIVE reporter present at the prison said that, at the time Niehaus addressed the crowd, there were about two dozen people present.

Naidoo added that the arrest should serve as a warning that “contravention of the lockdown regulations, especially amid the ever-increasing Covid-19 virus, will not be tolerated”.

Niehaus was placed in a police van and taken to the Estcourt police station.

Former president Jacob Zuma's foundation confirmed that he was on his way to “hand himself over” to prison authorities after he left his Nkandla homestead.

Carl Niehaus said he will not go down without a fight.
Politics
3 months ago

Transport minister Fikile Mbalula has taken a dig at MKMVA spokesperson Carl Niehaus after he vowed to appeal his suspension from the ANC.
Politics
3 months ago