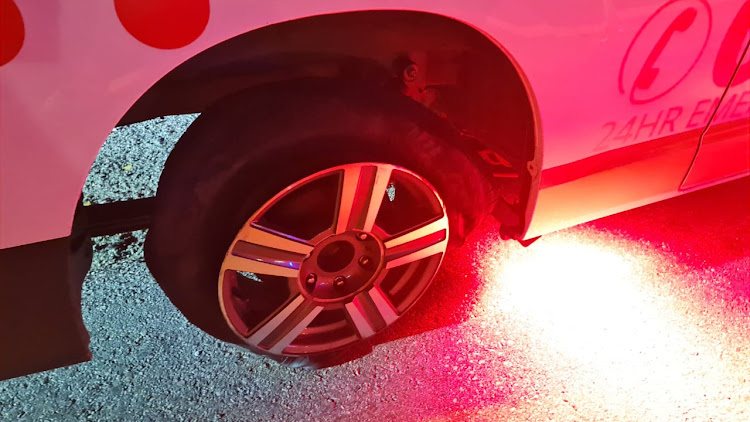 A Netcare 911 ambulance crew with two medical personnel on board, travelling on the N1 northbound near Hammanskraal, fell victim to the spiking incident on Thursday night.
Image: Supplied/Netcare

A Netcare 911 crew was robbed at gunpoint when the ambulance they were travelling in was spiked on the N1 northbound near Hammanskraal, north of Pretoria, on Thursday night.

Netcare 911 spokesperson Shawn Herbst said the ambulance crew, with two medical personnel on board, was travelling to Polokwane at about 7pm when the crew experienced a loud bang followed by extreme steering difficulties, eventually completely disabling the vehicle.

“Before the crew were able to realise the gravity of the event, four men armed with handguns surrounded the vehicle pointing their firearms. The crew were then robbed of all their personal belongings,” he said.

“The spikes, being of a similar colour as the road itself, cannot be seen,” said Herbst.

What would you do if you were stopped on a highway at night by flashing blue lights on a vehicle in which the occupants were dressed in police ...
News
8 months ago

He said the crew were not injured during the robbery and no patient was being transported at the time.

“A support team from Netcare 911 was immediately dispatched to the scene. The matter has been reported to the SAPS,” he said.

This is the third spiking incident that has affected Netcare in the past couple of months, on the same road in the same area, said Herbst.

“Such acts of criminality cannot be tolerated and we plead with members of the public who are aware of such criminal elements in their community to come forward.”

In May, the Gauteng traffic police issued a warning to motorists about the increase in the spiking incidents. The traffic department, among others, listed the N1 Polokwane and N4 Mpumalanga interchange in Pretoria as hotspots for spiking incidents.

Traffic police save victims from road spike gang in Tshwane, kill one suspect in shoot-out

A gang targeting motorists with spikes placed across the road - forcing drivers to stop, before the vehicles' occupants are robbed - was foiled by ...
News
7 months ago

Criminals are using the cover of darkness to place "spikes" on roads, causing motorists to stop or crash - and then rob them.
News
8 months ago