Police deployed to Nkandla as protest action grows in KZN 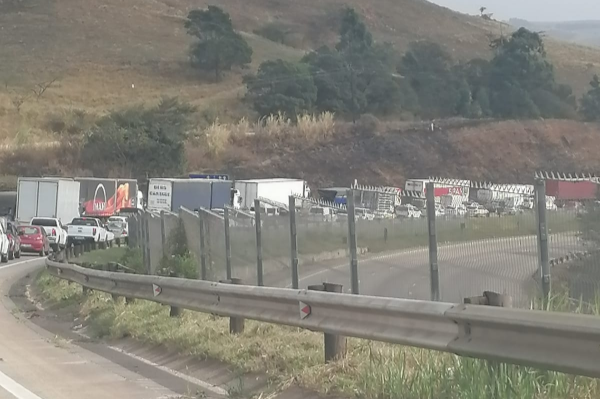 Traffic on the N3 between Durban and Pietermaritzburg was backlogged for several kilometres due to protest action.
Image: Vernon Moodley

The police were deployed to Nkandla in KwaZulu-Natal on Friday morning.

The deployment came after widespread protests in and around Durban following a viral message calling for a “#ShutdownKZN” protest in support of former president Jacob Zuma after he was jailed on Wednesday night.

According to the viral message, Zuma’s supporters planned to shut down “factories, government, shops and roads”.

“We can confirm there is protest action in the King Cetshwayo district and the N2 is closed due to protesters burning tyres and trucks blocking the road. There are no reports of any arrests.

“Within Durban there are only service delivery protests in the Umzinyathi, Nqutu and Ntuzuma areas,” she said.

Protesters have burned tyres and dumped piles of sand and stone on the N3 between Pietermaritzburg and Durban. It is believed that the protest is part of the Shutdown KZN call, in support of former president Jacob Zuma. Pics by Vernon Moodley. @TimesLIVE pic.twitter.com/td9PB7PlWY

A major route in KwaZulu-Natal, the N3 between Durban and Pietermaritzburg was blocked by burning tyres and traffic was backlogged for several kilometres.

“The police service has been dispatched,” he said.

Motorists have posted visuals on social media which showed trucks blockading the N2 in Richards Bay and Tongaat.

WATCH| Trucks have been used to block part of the R34 highway between Empangeni and Richards Bay. An official of uMhlathuze municipality has confirmed that the protests are related to former president Jacob Zuma's incarceration. @TimesLIVE

At the corner of Quarry Road East and Umgeni Road in Durban, informal settlement residents claimed they had been setting up a blockade from as early as 3am.

Siphiwe Shazi said their actions were in solidarity with Zuma.

After being dispersed from the road, residents were screaming  “what did Zuma do” from their front doors and yards.

“At 4am we were here because we are prepared to fall where he falls. We are saying leave Msholozi alone. The man is old. Our standpoint is that he has not been given a fair trial as our leader and former president. We want to know what it is that he did, and is he the first person to do that?” residents said.

Residents said because they could not travel to Nkandla to show support at Zuma’s home, they were participating in the protests on Friday.

A screengrab that is circulating showed the video on Duduzile Zuma-Sambudla’s Twitter page but was later removed.
News
6 months ago

The snaps show former president Jacob Zuma in what appears to be a medical room with a correctional services official.
News
6 months ago

“We are profoundly disturbed by the willingness of Mr Zuma to court public violence and lawlessness in support of political and personal agendas,” ...
Politics
6 months ago