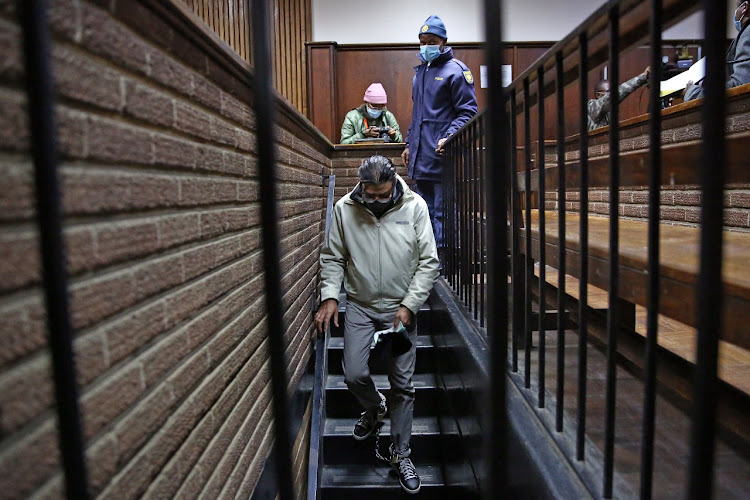 Gupta family associate and businessman Iqbal Sharma has launched a fresh bail bid with the Free State high court, saying he has no reason to flee the country.
Image: Thapelo Morebudi / The Sunday Times

In a bid to secure bail, lawyers of Johannesburg businessman Iqbal Sharma on Friday called on the state to grant him bail with conditions as stringent and tight as they would like.

Sharma is accused of having played a crucial role in the corruption which unfolded in the multimillion-rand Estina dairy project.

Addressing judge Joseph Mhlambi of the Bloemfontein high court, advocate Mannie Witz, for Sharma, offered the state what Mhlambi labelled an open cheque where they could suggest a bail amount, house arrest, him reporting to a police station every day and even fitting him with an ankle bracelet, if they so wished.

He argued that Sharma would use his release to prepare for his trial, support his wife and continue with his business dealings.

Sharma is appealing an earlier decision by the Bloemfontein magistrate’s court to deny him bail last month, saying he was a flight risk. At the time, the state argued that Sharma had been “dishonest” with the court about his financial affairs, after it surfaced that he had failed to disclose that he had about R264m in a UAE business account.

Businessman Iqbal Sharma on Friday tried to stop the media from reporting on his fresh bail application being heard by the Bloemfontein high court.
News
11 months ago

The state had further said he travels extensively, speaks foreign languages, is extremely wealthy and may have connections which could help him start a life elsewhere.

In her bail ruling, magistrate Estelle de Lange said the state had a strong case against Sharma and that should he be released on bail there was a possibility he would flee.

Sharma had been arrested with Peter Thabethe and Dr Limakatso Moorosi, who are former heads of the department of agriculture, and Seipati Dhlamini, who was the department’s CFO. Moorosi, Dhlamini and Thabethe are out on bail of R10,000.

Witz had criticised numerous reasons given by the magistrate when she denied him bail last month. He submitted that she failed to take into consideration that Sharma has known about the investigation against him for more than two years. Within this time, he had left the country for business and leisure but always came back.

“The magistrate failed to put any weight on this,” Witz said.

He also pointed out that during the bail application, it was alleged that the case involving Sharma and his co-accused was the first arrest linked to state capture.

But Witz said this was not the case, adding that he was personally involved in four cases, where all the accused had been granted bail and had, except for former Bosasa COO Angelo Agrizzi, attended their proceedings faithfully. Agrizzi had missed proceedings due to ill health.

The corruption trials of former MP Vincent Smith and former Bosasa COO Angelo Agrizzi were separated when the case came before the Johannesburg ...
News
11 months ago

Witz said it was a fact that anyone intending to flee the country could attempt to do so. He added that fake passports were a reality and indeed, South African borders were porous but his client “shouldn’t be blamed for this”.

There was no evidence put forward at all that linked Sharma to making plans to flee SA, he said.

While Sharma had been arrested alongside three other people who had been granted bail, Witz argued that the same “cut and paste” argument of the others being possible flight risks had been applied but only this had worked against his client. Instead, other accused, some of whom are accused in cases where millions of rand was involved, have also been granted bail.

He also criticised how the magistrate had said she could not set any amount of bail for him because no amount could motivate him to stay in the country.

He submitted that the magistrate failed to take into consideration prison conditions and prison life, especially in the wake of Covid-19 infections.

Witz stressed there was no social distancing or proper screening as prisons had a new intake of prisoners daily.

Prosecutor Peter Serunye then started delivering his arguments for the state.

On Covid-19 and prison conditions, he said Witz was bringing about a new bail application where some issues had not been canvassed before in the lower court.

He added that some of the matters raised by Witz in this appeal had been brought to the lower court and the court had applied its mind and reached a conclusion.

SA’s Investigating Directorate jumped the gun when stating Interpol had issued red notices for the arrest of two Gupta brothers and their wives.
News
11 months ago