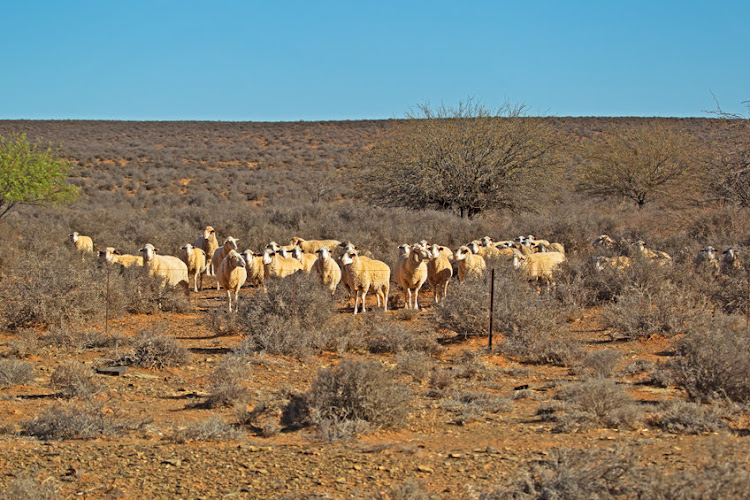 The bleak landscape that sustains Afrino sheep in the Nama Karoo was a lush 'Garden of Eden' around 300,000 years ago, according to evidence from isotopes in an ancient ostrich eggshell.
Image: 123rf/geoffsp

If the sheep on Bundu Farm in the Northern Cape are lucky, the 3.3cm of rain in the average March will germinate enough plants to sustain their sparse grazing.

For much of the year though, this sparsely populated place west of the small town of Prieska is dry as dust. Droughts are frequent and prolonged.

It hasn't always been like that though. New evidence from an ancient ostrich eggshell shows that between 250,000 and 350,000 years ago this was a “Garden of Eden” covered in lush grazing and wetlands. 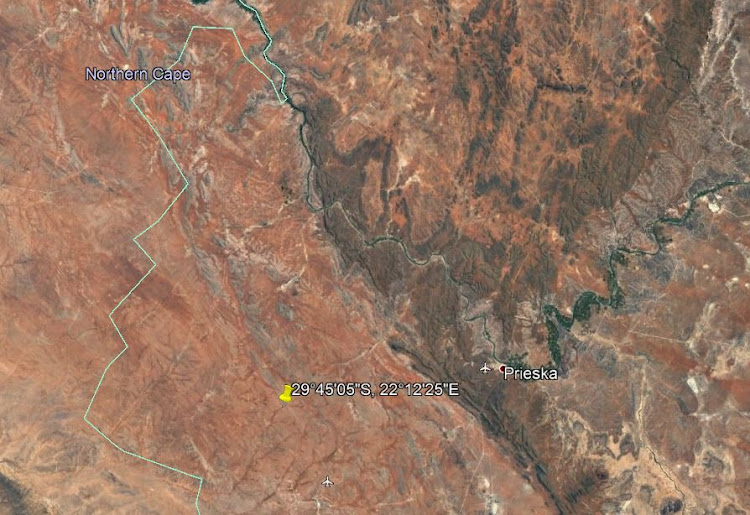 The yellow pin shows the location of Bundu Farm in the Northern Cape.
Image: Google Earth

The findings represent important new information about the extreme climate change faced by human early ancestors, according to archaeologists.

Philip Kiberd and Alex Pryor, from the University of Exeter, studied isotopes and the amino acid from ostrich eggshell fragments excavated at the early middle Stone Age site.

Bundu Farm, 50km west of Prieska in the Upper Karoo, is one of a handful of southern African archaeological sites associated with the earliest appearance of communities with the genetic signatures of Homo sapiens.

Megalotragus priscus was the last species of its genus, which includes the largest alcephalines to ever live. It survived until the Holocene in Southern Africa and despite having similar features to the hartebeest, it was closer to wildebeest. #paleoart #paleontology pic.twitter.com/s5RyRcu8ew

The new research supports evidence from fossilised animal bones that past communities in the region lived alongside creatures far removed from the odd steenbok, rabbit, hare, aardvark, porcupine and jackal the landscape now supports. They hunted alongside lions and hyenas for wildebeest, zebra, small antelope, hippos, baboons and extinct species of Megalotragus priscus (similar to a cross between the hartebeest and wildebeest) and Cape giant zebra (Equus capensis.

After this period, the eggshell evidence and other finds at Bundu Farm suggests, cooler and wetter climates gave way to increasing aridity from about 200,000 years ago.

This process of changing wet and dry climates is recognised as driving the turnover and evolution of species, including Homo sapiens.

The study, published in the South African Archaeological Bulletin, shows that extracting isotopic data from ostrich eggshell is a viable option for open-air sites more than 200,000 years old.

The technique, which involves grinding a small part of the eggshell to a powder, allows experts to analyse and date the shell, which in turn gives a fix on the climate and environment in the past.

Ostriches eat the freshest leaves of shrubs and grasses in their environment, which means shell composition reflects their diet. 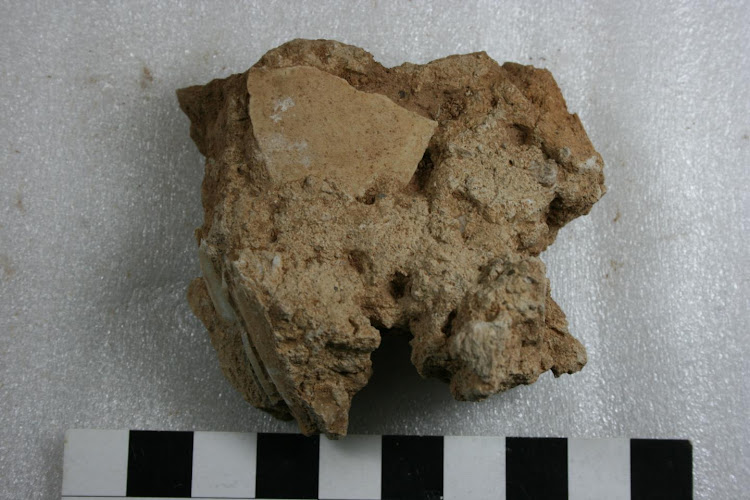 As eggs are laid in the breeding season across a short window, the information found in eggshell provides a picture of the prevailing environment and climate for a precise period in time.

Bundu Farm was first excavated in the late 1990s, and the material removed is stored at the McGregor Museum in Kimberley.

Kiberd, who led the study, said: “This part of SA is now extremely arid, but thousands of years ago it would have been Eden-like landscape with lakes and rivers and abundant species of flora and fauna.

“Our analysis of the ostrich eggshell helps us to better understand the environments in which our ancestors were evolving and provides an important context in which to interpret the behaviours and adaptations of people in the past and how this ultimately led to the evolution of our species.”

It may have been fabric, not food, that advanced human evolution

Ancient geometric patterns created in sand on the Cape coast are hailed as one of the most profound artefact finds of our species, writes Heather ...
Opinion & Analysis
1 year ago

A rock shelter in SA’s Kalahari documents the innovative behaviours of early humans who lived there 105,000 years ago, write Jayne Wilkins and ...
News
1 year ago