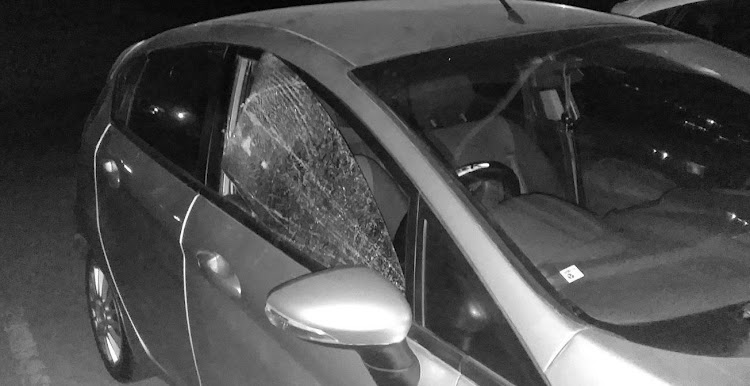 Lightweight boxing champ Lusanda Komanisi on Monday described the harrowing experience of being caught up in violent protests on Sunday as he was driving home from Bramley. His car was damaged in the process.
Image: Supplied

“It was just a flashback of all my life in a split second.”

This is how Lusanda Komanisi, a lightweight boxing champion, explained his near-death experience on Sunday evening.

The 31-year-old boxer was driving to his home in Rembrandt Park, near Alexandra in Johannesburg, from a friend's place in nearby Bramley just before 8.30pm when he got caught up in the violent protest.

Just the previous day, he returned from East London in high spirits, after he won a fight against former IBF youth champion Sinethemba Bam, by knockout in the first round.

“I was like, ‘oh God, please, I don’t want nothing to happen to me, I just want to get home.' All I wanted to do was to get home, that is why I just closed my eyes and started to drive in a zigzag. I just didn’t know what was going to happen, I just wanted to break free from what was happening,” he said.

Protesters continued to loot shopping centres in KZN on Monday morning. Some were seen walking off with appliances including TVs and washing ...
News
1 year ago

Speaking to TimesLIVE, Komanisi said as he was driving he saw flames, “out of nowhere”.

“Cars were in flames, taxis burning, trucks — on the road and then I tried to slow down because I didn’t know whether to go forward or turn back because when I look at my rear-view mirror they were setting cars on fire as well right behind me.

“I just knew that something was going to happen — I knew that it was bad. In my mind I wanted to stop the car and get out and leave it next to the road, but something said if I get out of the car, I might get into even more trouble, so I drove through the flames.

“They were throwing bricks, I could hear gunshots and people shouting, ‘Shaya, shaya [hit, hit]’. I was so scared, I was shaking and I was praying. There were big drums on the road blocking the cars. I drove through [and] got to the house, luckily,” he said.

It’s confusing and scary because a lot of people are going to lose their jobs. It’s terrifying, I don’t know when it’s going to end.

Komanisi said he only saw how damaged his car was a few minutes later, after narrating his near-death experience to his girlfriend.

“I couldn’t believe how the car looked because I just imagined if that was me. I didn’t feel any pain until I woke up this morning. I realised that I was hit by a brick on the shoulder,” he said.

He said he could still hear people singing on the roads from his house.

“I am scared, I am terrified. I am in the house. I think I am going to nurse my life, stay in the house until its safe outside and see if my right shoulder is not badly hurt. I am not planning to go outside.”

Komanisi hopes there will be a resolution soon.

“It’s confusing and scary because a lot of people are going to lose their jobs. It’s terrifying, I don’t know when it’s going to end. I just hope there is a solution and those businesses are restored and people get back their jobs,” he said.

“I just hope everything goes back to normal. This is becoming worse than the pandemic.”

Protesters have blockaded roads and some were seen walking off with appliances and shopping trolleys filled to the brim.
News
1 year ago

The Durban Chamber of Commerce and Industry has implored President Cyril Ramaphosa to deploy the South African National Defence Force and declare a ...
News
1 year ago