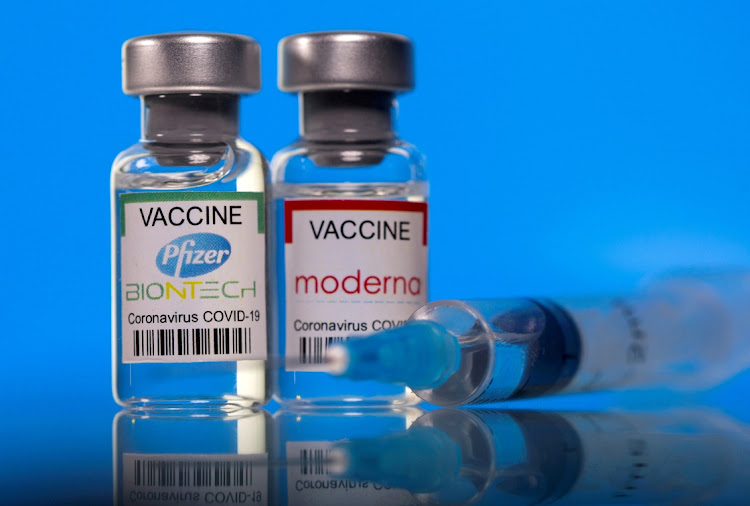 Solidarity and AfriForum are fighting in court against the nationalisation of vaccines.
Image: REUTERS/Dado Ruvic/Illustration/File Photo

Ongoing violent protests hampered healthcare at some hospitals and the rollout of vaccinations in Gauteng and KwaZulu-Natal on Monday.

Dr Frans Skosana, Netcare Olivedale hospital pulmonologist, told TimesLIVE that the protests had prevented some staff members from being able to report for duty.

Skosana said also the security risk also hampered hospital deliveries including that of much-needed oxygen for the treatment of Covid-19 patients. He said oxygen levels were at 23%, but they were counting on deliveries late on Monday night.

In the same period, according to figures from the National Institute for Communicable Diseases (NICD), there were 11,182 new Covid-19 cases recorded across SA. This means that there have been 2,206,781 infections recorded to date.

A World Health Organization (WHO) committee said on Monday that human genome editing technologies to treat serious disease should be shared more generously, to allow poorer nations to benefit from the highly dynamic scientific field.

"WHO should work with others to encourage relevant patent holders to help ensure equitable access to human genome editing interventions," the 18-member committee said in a report.

Established in late 2018 after a Chinese scientist said he had edited the genes of twin babies, the committee of gene editing experts was asked to make recommendations on national and international governance mechanisms for human genome editing.

Underlining the WHO's existing stance, the report strongly opposed making modifications to the genetic code in humans that would be passed on to future generations, known as heritable germline genome editing.

"No-one in their right mind should contemplate doing it because the techniques are simply not safe enough or efficient enough and we're not ready in terms of looking at all the ethical considerations," said Robin Lovell Badge of Britain's Francis Crick Institute, a committee member.

The Global Alliance for Vaccines and Immunization (GAVI) said on Monday it had signed two advance purchase agreements with Chinese drugmakers Sinopharm and Sinovac to provide up to 550 million Covid-19 vaccines to the COVAX programme.

The new deals include up to 170 million doses of the Sinopharm shot and up to 380 million shots of the Sinovac vaccine, through to the middle of 2022, the statement said. Sinovac confirmed the agreement in a statement.

"The agreements, which come at a time when the Delta variant is posing a rising risk to health systems, will begin to make 110 million doses immediately available to participants of the COVAX Facility, with options for additional doses," GAVI said.

GAVI, which runs the global vaccine sharing scheme COVAX with the World Health Organization (WHO) did not immediately provide details of which countries would receive the doses.

Deliveries can start quickly because both vaccines have already been granted emergency use listing by the WHO, GAVI Chief Executive Officer Seth Berkley said.

"This is yet another example of Gavi's active portfolio management strategy, ensuring the Facility has options in the face of constraints such as supply delays," he added.

COVAX, which distributes vaccines to poorer countries, has struggled to meet its early commitments amid Indian export disruptions, forcing many countries to freeze their inoculation programmes in their early phases.

However, its latest supply forecast shows that the programme is on track to deliver more than 2 billion doses by early 2022.

JMPD spokesperson Chief Supt Wayne Minnaar confirmed Ngcobo’s passing, saying he had been informed by Ngcobo’s nephew that his former boss had died between 2am and 3am on Monday.

Clinics and community vaccination sites in Durban were closed on Monday as protesters continued to go on the rampage in and around the city.

Dis-Chem also announced that its pharmacies, vaccination sites and drive-through testing stations would be closed in KwaZulu-Natal.

The number was the highest ever recorded on a Sunday, KDCA data showed, though below three consecutive days of peaks leading up to 1,378 on Friday.

Starting on Monday, the government has imposed the strictest level of social distancing in Seoul and neighbouring areas for the first time, including a ban on gatherings of more than two people after 6 p.m.

The new wave of infections has so far brought fewer serious cases and deaths than earlier rounds, with many older and more vulnerable South Koreans now vaccinated against the virus.

The latest outbreak brings South Korea's total Covid-19 cases to date to 169,146, with 2,044 deaths, well below numbers seen in many other industrialised countries.

But health authorities have expressed concerns over the rising number of young patients who have not yet received vaccine shots, and the spread of the highly contagious Delta variant in recent outbreaks.

KDCA Director Jeong Eun-kyeong said a new study estimated that the number of confirmed daily cases would only start to decline after reaching about 2,300 by mid-August.

"If the spread of the infection is strongly controlled, the number of daily cases is estimated to remain at current levels for the next two weeks and then begin to decrease to about 600 cases by the end of August," Jeong told a briefing on Monday.

Indonesian sales of Chinese vaccines to public postponed amid criticism

An Indonesian pharmaceutical firm has postponed a plan to sell a Chinese Covid-19 vaccine directly to the public, amid criticism by health experts that such commercial schemes could bypass vulnerable groups in a country that promised free shots to all.

The decision came as coronavirus cases and deaths from the virus have hit record highs, pushing the healthcare system close to breaking point in parts of densely populated Java island.

State-owned pharmaceutical company Kimia Farma said on Monday it had put the scheme to sell the Sinopharm vaccine on hold to allow more time to explain it to the public.

"For the time being we have postponed it after it generated a lot of interest," said Novia Valentina, a spokeswoman for Kimia Farma Apotek, a subsidiary of the state-owned firm.

The company previously said the scheme, which intended to sell the vaccine at pharmacies for 879,140 rupiah ($60.53) for two doses, would help "accelerate herd immunity".

But health experts have said the priority should be for free vaccines going to all vulnerable groups."

Later if vaccines are in bountiful supply, maybe then there could be an option for paid vaccines, but not now," said Diah Saminarsih, a ‎senior adviser to the Director-General of the World Health Organization.

The Sinopharm vaccine is already available in Indonesia through a programme that allows private firms to purchase vaccines for employees.

Budi Gunadi Sadikin, Indonesia's health minister, said on Monday extending it to individuals was because some companies were unable to purchase shots for staff, adding it could go ahead once there was sufficient supply of free vaccines.

What is secondary Covid-19 contact, and do I need to isolate?

“People get confused with secondary contact. They think that they must go into quarantine because my friend's cousin has got it. You can't get it directly via a third party. Your primary contact first has to have Covid-19 before you have to worry.”

What is secondary Covid-19 contact, and do I need to isolate?

Pfizer, US officials to meet on Covid-19 booster shots

US drugmaker Pfizer said it will meet with federal health officials as soon as Monday to discuss the need for a booster dose of the coronavirus vaccine as it prepares to seek regulatory approval for a third dose of its Covid-19 shot.

The prospect of an extended lockdown in Sydney loomed on Monday as Australian health officials reported yet another record daily rise in Covid-19 cases for the year, fuelled by the highly infectious Delta variant.

New South Wales state reported 112 new locally transmitted Covid-19 cases, almost all of them in Sydney, despite the country's biggest city entering its third week of lockdown. Case numbers have been at record levels for at least three days.

There was, however, a glimmer of light as the number of newly-infected people who were out in the community while infectious dropped to 34 from 45 on Sunday.

State Premier Gladys Berejiklian said the progress of that figure in coming days would determine whether Sydney's lockdown, due to end on Friday, would be extended.

"That's the number we need to get as close to zero as possible," Berejiklian said during her daily televised briefing. "It is really up to us.

The health expert advice will be based on what those numbers look like. I can't be clearer than that.

"Berejiklian said a majority of Monday's cases were family members or close friends of already infected persons, and pleaded with residents to comply with lockdown rules, which were tightened over the weekend.

Schools in Sydney, home to a fifth of Australia's 25 million population, are closed, public gatherings are limited to two people and residents may only leave home for essential business, including work and grocery shopping.

Zaw Min Tun told a news conference that vaccinations would be extended to those below the age of 18.

He said Myanmar had an agreement with Russia for the production of five million vaccine doses a year.

'Government is the bottleneck in the vaccine process': Solidarity calls for privatisation of vaccine procurement

Solidarity believes it is time to improve SA's vaccine rollout by opening up the process beyond government’s current monopoly.

The trade union commissioned the independent research after determining that the death rate due to the coronavirus among its members was 40% higher now than it was this time last year. Also, it said, because vaccination is seen to be a way out of lockdown regulations — something its members were “sick of”.

“If people want to decide on vaccines, these should be available. Reality is that vaccines should have been available long ago. The government’s dealing with the vaccine process simply is a disgrace. SA still is among the worst vaccination countries in the world.

'Government is the bottleneck in the vaccine process': Solidarity calls for privatisation of vaccine procurement