Looting and death in Jeppestown: ‘We were scared bullets would come through our windows’ 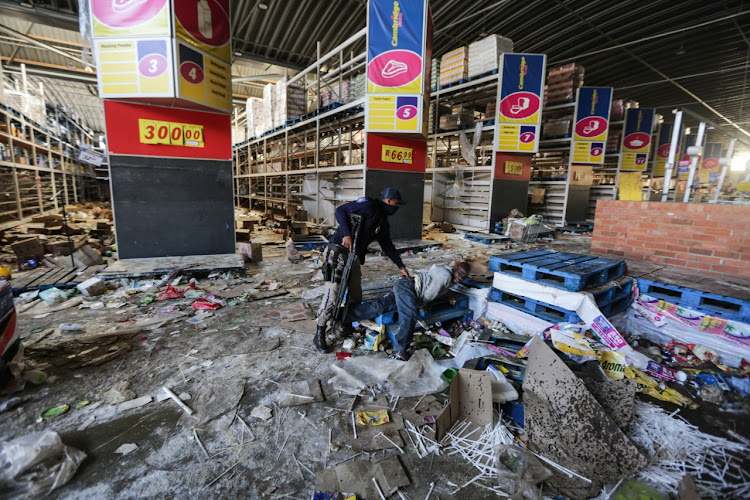 A police officer arrests a looter inside a Cambridge Food store in Vosloorus on July 12 2021.
Image: Alaister Russell/The Sunday Times

A man who was shot dead when police tried to stop the looting of a bottle store in Johannesburg was covered with plastic bags and boxes by protesters, who then resumed their pillaging spree.

This was one of many violent scenes that played out in the city on Sunday.

According to an eyewitness who asked not to be named, the man was shot dead at around 7am in Jeppestown.

The woman, who lives close to the scene, said at midnight on Saturday they were woken  by screams and singing in the streets. Soon a large group of people started vandalising and breaking into the liquor store at Shoprite Usave.

“After they managed to open it, they started taking everything. First it was very interesting to watch because we wanted to see what was happening, but as time went by we saw things were turning very bad,” she told TimesLIVE.

“Eventually the police came and started shooting. We were scared in our flats because we thought the bullets could get through our windows.”

Calm was restored, but at 6am on Sunday a mob returned to loot the bottle store. The police arrived and opened fire to disperse the crowds, she said.

This was when the man was allegedly shot dead while trying to flee, she said.

“One person who tried to run away, who wasn’t carrying anything out of the Shoprite, was shot in front of us. They shot him three to four times. They [police] shot him and left him like that, lying down,” she alleged.

“People who were protesting came back and reached out to the person to see if he was moving.

It took police about three hours to come. People took a lot of things and I am sure the Usave is empty because they had all the time in the world.

“I was very scared because I saw them shooting this person. My child was crying because we didn’t know someone was going to be shot.

“We saw them [protesters] holding their heads and talking to the police. After 20 minutes the protesters covered the man with plastic bags and boxes and went back to Usave to continue looting alcohol. After they took all the alcohol, the Usave started burning,” she said.

She said firefighters extinguished the blaze at about 10am.

“People were carrying stoves, kettles — it was bad. There were no police in sight. It took police about three hours to come. People took a lot of things and I am sure the Usave is empty because they had all the time in the world.”

The woman said calm was restored on Monday morning, but she was worried the violence would flare up again.

“I managed to request an Uber to get to work but I don’t know about later.”

Thato Mogatla, who lives in Troyeville, close to Hillbrow, said chaotic scenes unfolded in the area on Sunday.

“People were running around the streets and being chased by law enforcement until around 2am. I heard gunshots until 1.30am.”

Mogatla said during violent clashes between police and protesters, a woman and her son were caught in the crossfire.

“I’m not sure what became of the woman and her son but she was crying and screaming that he was shot four times and there were people walking with her and consoling her. I’m not sure if it was rubber bullets or actual bullets.

Military to be deployed in KZN and Gauteng as looting spreads

The cabinet has taken a decision to deploy members of the military in KwaZulu-Natal and Gauteng in the wake of the protests against the incarceration ...
Politics
11 months ago

“It was chaotic. There were people running up and down the streets. Two streets away people had set the road alight. I eventually stopped watching out of fear they would see and direct their attention towards the house. People were also speeding on the wrong side of the road in one-ways. The chaos would come and go.

“We are close to Jeppestown, and that’s where the main issue was, so they would sort of retreat to our side and go back. I eventually wasn’t scared for my safety because they were clearly targeting shops, but at first it was scary.”

On Monday, the police confirmed they were investigating the circumstances around the deaths of six people after violent protests erupted in Gauteng and KwaZulu-Natal.

IN PICTURES | Violent riots and looting grip KZN and Gauteng

Widespread protests have erupted across KwaZulu-Natal and Gauteng, with shops looted and stores and vehicles torched.
News
11 months ago

National Joint Operational and Intelligence Structure (NatJoints) spokesperson Col Brenda Muridili said the body of a man with gunshot wounds was found on Sunday morning close to the Alexandra clinic.

Later in the day, officers found the body of a security guard with assault wounds in Jeppestown.

Two other bodies with gunshots wounds were found in Dobsonville and Germiston on Sunday evening, Muridili said

“The causes of death for the security guard and the body found in Dobsonville are part of investigations.”

In KwaZulu-Natal there were reports of two people killed — one in Inanda and the second in Umbilo.

According to Muridili, 219 arrests were made in the two provinces — 96 in Gauteng and 123 in KZN.

Violent riots erupted in Jeppestown and other parts of Johannesburg on Sunday.
News
11 months ago

In total, police say they have arrested 62 people for 'opportunistic criminality' that started in KwaZulu-Natal and spread to Gauteng on Saturday ...
News
11 months ago