Looting and violence blew up around KZN on July 9 2021 and the situation became even more explosive at the weekend. Protesters continued to loot shopping centres and blockade roads on the morning of July 12.

Duduzile Zuma-Sambudla took a swipe at President Cyril Ramaphosa on social media, defending the “criminal elements” who were behind millions of rand worth of damage after violent looting, fiery protests and national road closures in KwaZulu-Natal as part of the Free Jacob Zuma campaign.

On Sunday night, Jacob Zuma's daughter tweeted: “How does our Proxy President for WMC tell us live that he is watching people’s Twitter accounts ... that is why we have no leadership in the country, ubusy neTwitter ... what a joke!!! Our people are hungry. Our people don’t have jobs. Go work and stop stalking people on Twitter ...” 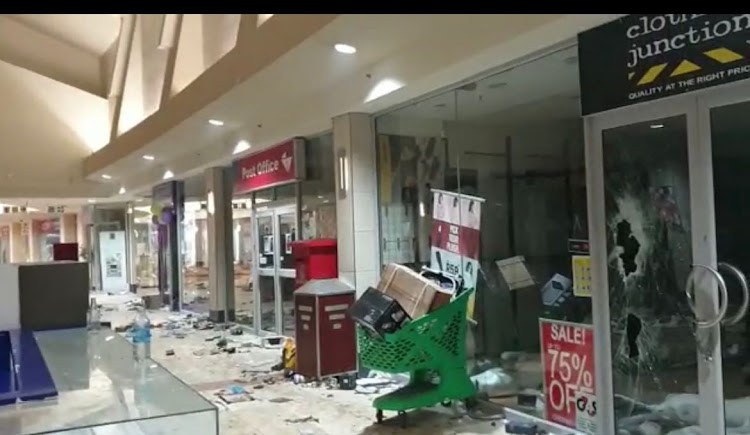 A scene from the Ridge Shopping Centre in Shallcross, Chatsworth, which was looted on Sunday night.
Image: Supplied

Zuma-Sambudla has been actively promoting the unrest that has destabilised KZN from Friday and has spread to other parts of the country.

On Sunday night, police and private security companies were stretched to the limit responding to a night of explosions, gunshots and fires that erupted in and around residential townships including Isipingo, Chatsworth, Reservoir Hills, Phoenix and Verulam.

Protesters continued to loot shopping centres in KZN on Monday morning. Some were seen walking off with appliances including TVs and washing ...
News
11 months ago

Zuma-Sambudla's tweets were in response to Ramaphosa’s address to the nation on Sunday night when he addressed the violence that started in KwaZulu-Natal and has spread to other areas, including Gauteng.

“While there are those who may be hurt and angry at this moment, there can never be any justification for such violent, destructive and disruptive actions.

“It is a matter of concern to all South Africans that some of these acts of violence are based on ethnic mobilisation,” Ramaphosa said.

“Since the advent of democracy, institutions like the Constitutional Court have been at the forefront of improving the lives of South Africans. Let us be clear, as a nation, that we will not tolerate acts of criminality. Those involved in acts of violence will be arrested and prosecuted. Those found guilty of breaking the lockdown regulations will receive the stipulated penalty. This will be done without fear or favour.”

While there were many endorsements of her tweet, there were scores of clapbacks lobbed against her, asking why her father had not reversed the situation in the nine years he was president.

The useless 9 years when the Guptas were governing this country created big mess. It will take this country long before we recover. The former Proxy President gave a lot chance to the foreign handlers. Eish, our beloved country! It is hard to reverse the Gupta mess. Eish!

One user said: “And your father is the biggest cause of that hunger, poverty, unemployment, he enriched his Gupta friends and family sies!”

Another asked: “He was a president for 9 years for heaven sake, why you didn't help him to implement measures to at least put in place good measures, why now?”

The transport business in SA is “a business that only brings tears and more tears”, says Road Freight Association CEO Gavin Kelly after riots in ...
News
11 months ago

'Let's be clear ... we will not tolerate acts of criminality': Ramaphosa on violent protests

President Cyril Ramaphosa on Sunday night slammed what he called 'sporadic but increasingly violent' protest action that had spread from ...
Politics
11 months ago

Violent riots erupted in Jeppestown and other parts of Johannesburg on Sunday.
News
11 months ago