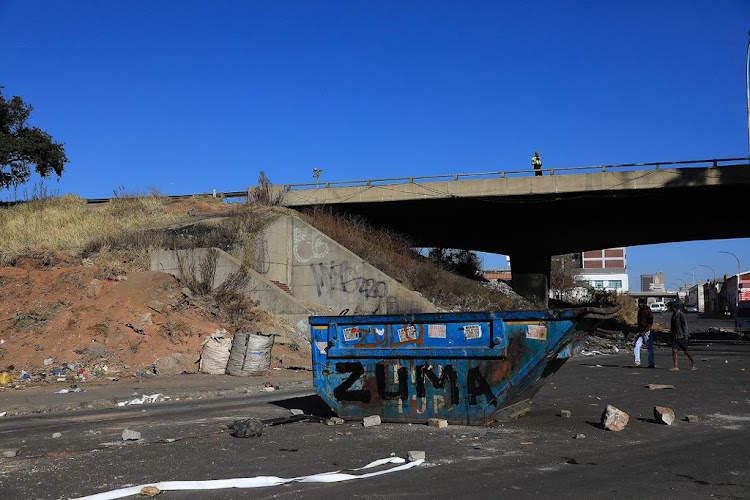 A scene from riots in inner-city Johannesburg on Monday where looting has been associated with a campaign against Zuma's incarceration, as well as opportunism, and even desperation. Later in the day there was large-scale looting in Soweto, close to Maponya Mall.
Image: Alon Skuy

Vaccination sites around Gauteng were forced to halt operations as unrest and violent protests spread across the province.

This is according to the provincial health department, which announced the disruption of services on Monday.

The department said it was inundated with calls from residents who require ambulances from different parts of the province, but road blockades and attacks on paramedics made it impossible for the service to respond.

“To this end, some provincial government services, including vaccination sites in the affected areas, have had to temporarily close due to safety concerns by both the staff and members of the public.

“Emergency Medical Services (EMS) are equally experiencing difficulty in responding to distress calls in communities due to limited access,” said the department.

The department appealed for calm and warned the protests could become superspreaders of Covid-19.

Clinics and other health facilities in Durban, KwaZulu-Natal, also bore the brunt of demonstrations on Monday.

According to TimesLIVE, the eThekwini municipality announced the closure of its clinics due to threats directed at health facilities in the city.

It was not immediately clear when the sites will resume operations, but people eligible for vaccination under phase 2, were urged to continue with online registrations.

Dis-Chem also announced that its pharmacies in the province would be closed due to the unrest.

Due to the unrest in KwaZulu-Natal, Dis-Chem Pharmacies, Dis-Chem Vaccination Sites and Dis-Chem Drive Through Testing Stations in the area will be closed today. We appreciate your patience and apologise for any inconvenience. 💚 KZN family, please stay safe. pic.twitter.com/EXSvvjXa2v

Addressing the nation on Monday night, President Cyril Ramaphosa called for calm, saying the protests are having a negative effect on the health system and economy.

He said the demonstrations, which initially started as a condemnation of the incarceration of former president Jacob Zuma, had become opportunistic acts of criminality.

“The victims of the violence that is unfolding now — the workers, the truck drivers, the business owners, the parents and families of those who have lost their lives — have done nothing wrong,” he said, warning that the poor will endure the effects of the aftermath.

“Though these may be opportunistic acts of looting driven by hardship and poverty, the poor and marginalised bear the ultimate brunt of the destruction,” said Ramaphosa.

ANC deputy secretary-general Jessie Duarte admitted that there were factions at each other's throats within the ANC but she was “not convinced” this ...
Politics
2 months ago

Business Unity SA says it welcomes the mobilisation of the military to help police units restore order in parts of Gauteng and KZN hit by protests ...
News
2 months ago