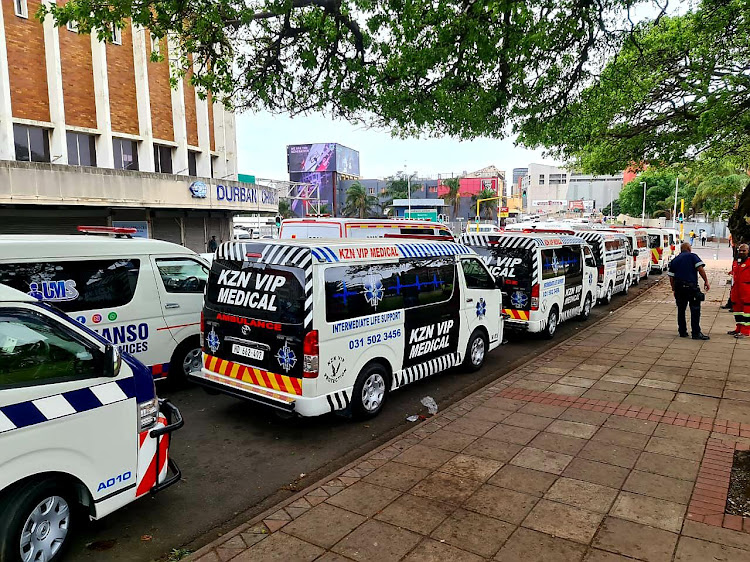 KZN VIP Medical paramedics were unable to reach a critically ill patient after their vehicle was stoned on Monday.
Image: supplied

Private ambulance service paramedics were left traumatised after their vehicle came under attack while they were rushing to attend to a medical emergency in Verulam, north of Durban, on Monday.

Gareth Naidoo, spokesperson for KZN VIP Medical, told TimesLIVE the critically ill patient was not attended to because of the attack.

“The paramedics were en route to the Verulam area to attend to a critically ill patient. While travelling on the R102 they were stoned from dense bush.

“They were highly traumatised. They called and requested to park the van because they are afraid to work the rest of the shift because of the hostile situation in the area.”

Verulam and Phoenix, where the ambulance service is based, have been under siege by protesters since Sunday night.

“We have to cancel our ambulance service attending to medical emergencies in and around the area. There is no access to medical treatment for these sick patients,” he said.

More than 30 private ambulance services in KwaZulu-Natal stopped operating to protect their vehicles from rampaging protesters on Monday.
News
10 months ago

'We started hearing gunshots. Patients started piling in one after the other,' said Dr Suhayl Essa, who works in the emergency room of the Hillbrow ...
News
10 months ago

A Netcare 911 crew was robbed at gunpoint when the ambulance they were travelling in was spiked on the N1 northbound near Hammanskraal on Thursday ...
News
10 months ago