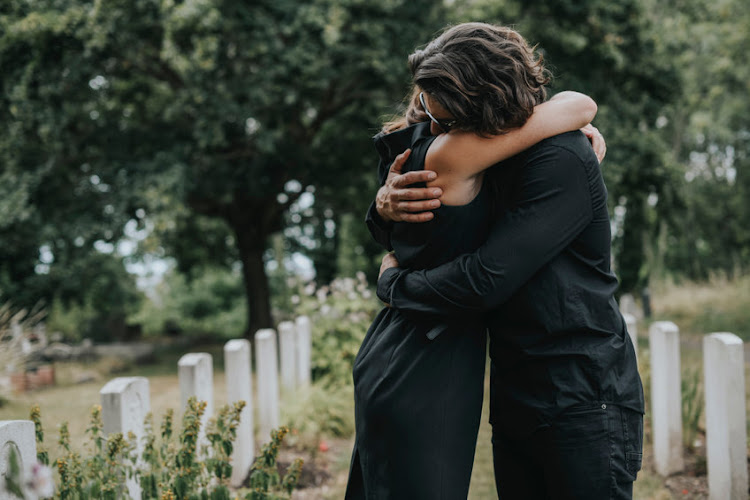 Excess deaths during the local outbreak of Covid-19 total more than 193,000.
Image: 123rf/rawpixel

The number of South Africans who died in the latest week analysed by the “excess deaths” team at the SA Medical Research Council was up more than 7% on the previous week.

More than 17,250 deaths were recorded between July 4 and 10, compared with 16,090 the previous week, as the Delta variant of Covid-19 accounted for nearly all new cases of the virus.

Excess deaths from natural causes — the number that exceeded the historical trend — reached 7,374 in the week ending July 10.

This was nearly seven times higher than the low of 1,064 between March 14 and 20 but still less than half the 15,926 at the peak of the second wave of the local Covid-19 outbreak, in the middle of January.

Since the number of deaths began to depart from historical norms at the beginning of May 2020, total excess deaths were estimated at 193,200 by July 10. At the time, the official Covid-19 death toll was 64,138.

Writing about its work earlier this year in the South African Medical Journal, the MRC team said it believed most of the excess deaths could be attributed to Covid-19, which was confirmed in SA 501 days ago. 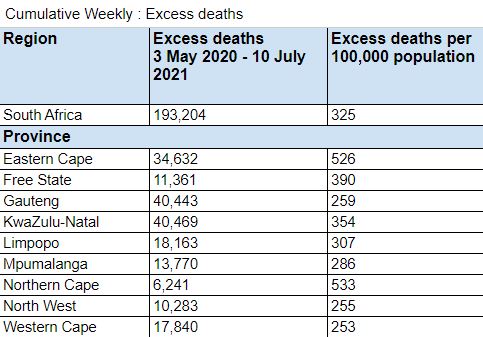 More than three-quarters of the excess natural deaths have occurred in the over-60 age group. Gauteng, which on Wednesday was responsible for 46% of SA's latest confirmed infections, saw 3,434 excess deaths in the week ending July 10.

The MRC team said: “This is higher than the number experienced at the peak of their first and second waves of the pandemic (about 2,100 excess deaths).”

It said a sudden drop in the number of natural deaths in KwaZulu-Natal suggested there may have been a slowdown in processing death registrations, particularly in Durban. “The estimates for the last week should be interpreted with caution,” said the MRC.

The national excess death rate since May 2020 has reached 325 per 100,000 people. Though the most excess deaths are in KZN, Gauteng and the Eastern Cape, the death rates per capita — taking account of provincial population sizes — are highest in the Northern Cape, Eastern Cape and Free State.

The death toll is worse than the peaks recorded during Gauteng’s first and second waves of infection.
News
1 year ago

The ban on alcohol sales meant to reduce the spread of Covid-19 did save lives, a study by the SA Medical Research Council and the University of Cape ...
News
1 year ago

Family and religious gatherings during Ramadan may have inadvertently acted as Covid-19 superspreader events in Muslim communities, some of SA's ...
News
1 year ago