POLL | Are you panic buying? 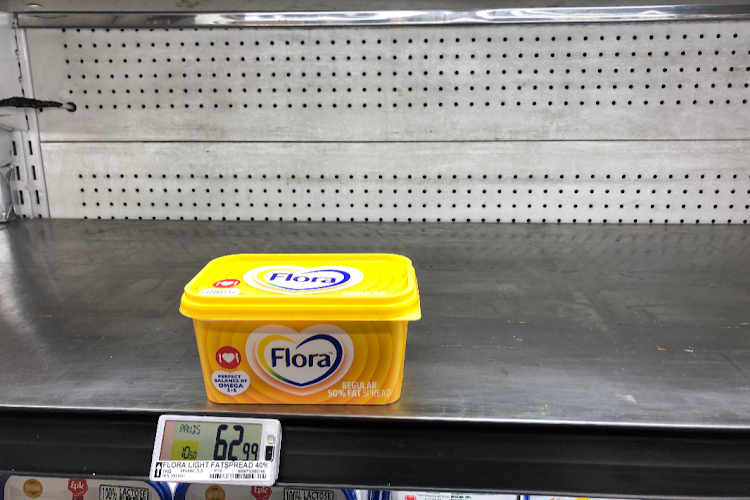 Shoppers have emptied shelves at a SuperSpar in Joburg after fears that supplies may run out.
Image: Jessica Levitt

Looting and riots in parts of Gauteng and KwaZulu-Natal have resulted in several shopping malls being damaged and disruption to supply chains.

Over the past few days, the unrest has seen stores not looted slowly running out of stock, as many panic buy.

Addressing the nation on Monday amid the violence and destruction of properties in both provinces, President Cyril Ramaphosa warned of several risks if the situation was not resolved.

Ramaphosa said the country could face food and medicine shortages as a result of disruptions.

“This means that our sick cannot get medication from pharmacies, food does not reach supermarket shelves, and health workers cannot go to work,” he said

“Our vaccination programme has been severely disrupted just as it is gaining momentum. This will have lasting effects on our ability to consolidate some of the progress we were already witnessing in our economic recovery.

“These disruptions will cost lives by cutting off the supply chains that sustain our food, health and production systems.”

TimesLIVE reported that a SuperSpar manager, who asked for their identity to be withheld, said there could be shortages in the coming days because of supply issues.

“For the people who don't have money now to buy, and they come next week, there may be some shortages. I can't say what or if it will happen, but it is a possibility,” said the manager.

Milk, bread and coffee could be in short supply as shoppers panic-buy.
News
4 months ago

Motorists have also been panic-buying petrol after the closure of the country's largest crude oil refinery, South African Petroleum Refineries (Sapref) on Monday.

The refinery is owned by Shell and BP, and is a key supplier of fuel for SA.

However, the Automobile Association said the closure did not mean people should panic as there are other suppliers which have not shut down.

AA spokesperson Layton Beard said there was no official confirmation that there was a fuel shortage.

“Our message is not to panic. We have had no official confirmation there are fuel shortages and we would suggest people should not panic,” said Beard.

The AA did, however, on Thursday urge people to limit their travel to help the nation preserve fuel supplies and ensure essential services were able to operate. It also warned of the probability of a significant fuel price hike looming as the rand comes under siege.

Acting minister in the presidency Khumbudzo Ntshavheni assured the public that government was working to try to prevent food shortages.

“We urge members of the public to remain calm and exercise restraint during these trying times,” said Ntshavheni.

“Government is working with the National Consumer Goods Council to ensure food security. If we have members of the public flocking into the shops and malls to buy food, we also risk spreading the Covid-19 virus to uncontrollable levels.”

SA farmers have been hit by days of unrest and looting as trucks carrying produce are prevented from delivering to markets and threatening food ...
News
4 months ago

In light of the ongoing state of turbulence it’s important to take a closer look at food security issues.
Ideas
4 months ago

If the violent looting and destruction seen in KwaZulu-Natal and Gauteng in recent days doesn't swiftly come to an end, food and medicine shortages ...
Politics
4 months ago