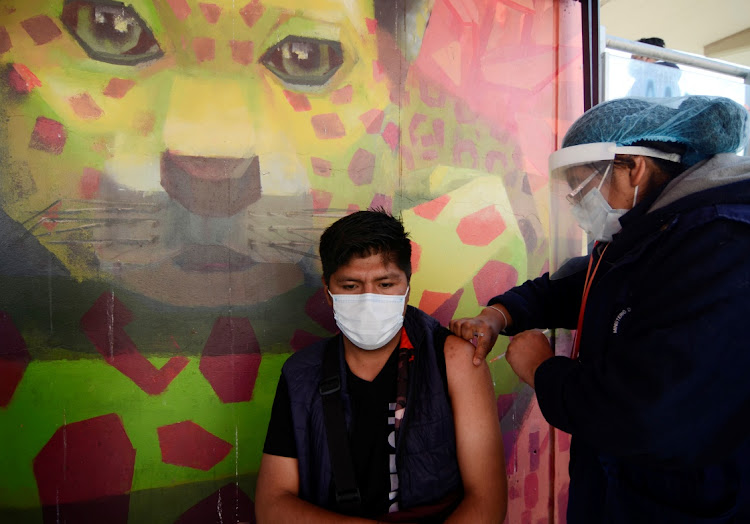 An ear, nose and throat specialist spent Friday night in the Edenvale police holding cells with four other people. He was accused of violating the Covid-19 curfew.

But, the doctor said, he was attending to a medical emergency in the West Rand.

Dr Ivan Jardine, who lives in Kensington, east of Johannesburg, had spent the late Friday afternoon and evening in Quellerina, west of Johannesburg, attending to his aunt — who he described as the oldest surviving member of the family. She is in her early 80s and needed medical attention.

The National Institute for Communicable Diseases (NICD) said on Monday that this meant there were now 2,302,304 total cases and 67,080 fatalities to date.

RX Venue Management has announced the sale of the popular Ticketpro Dome, a multipurpose indoor arena in Johannesburg.

“It is with a heavy heart that RX Venue Management today announces that after 20 years of being the management company of SA’s largest multipurpose indoor arena, the Ticketpro Dome has now been sold by the owners, Sasol Pension Fund, to a third party which does not operate in the event space,” the company said in a statement.

“This is a further devastating blow for the exhibitions, events and entertainment industry who have undoubtedly been the hardest hit during the Covid-19 pandemic.”

The Special Investigating Unit (SIU) on Monday welcomed the dismissal of senior Gauteng health official, Thandy Pino for her involvement in the irregular award of personal protective equipment (PPE) contracts worth more than R330m.

The SIU last year investigated allegations of maladministration in the appointment of service providers by the department to supply PPE and related goods and services in response to the Covid-19 pandemic.

The SIU said it was alleged Royal Bhaca Projects (Pty) Ltd was irregularly awarded a contract worth R125m from the Gauteng health department to supply PPE due to its director’s proximity to then health MEC Bandile Masuku.

The European medicines regulator said on Monday it is evaluating an application to use arthritis drug, Kineret, to treat Covid-19 in adult patients with pneumonia who are at risk of developing severe respiratory failure.

The European Medicines Agency (EMA) said it will assess data including results from two ongoing clinical studies investigating the safety and efficacy of the drug in patients hospitalised with Covid-19.

Kineret, currently authorised to treat a number of inflammatory conditions, is made by Swedish rare disease drug maker Sobi.

"It is thought that this could also help reduce the inflammation and tissue damage associated with Covid-19," the EMA said, adding that it expects the outcome from the evaluation in October.

The Tokyo Olympic Games have had their share of positive coronavirus cases before they open, but health expert Brian McCloskey says they were to be expected and are lower than initially imagined at this stage.

US tennis player Coco Gauff tested positive for Covid-19 before her departure. Other athletes have tested positive at the airport after arriving in Japan or once inside the bubble that is the athletes' village.

"What we are seeing is what we expected to see," McCloskey, a leading adviser to the Games, told a news conference on Monday. "We do the tests because they are a way of filtering out (people with Covid-19)."

"We identify them early, taking them apart from other people. It is expected. Each layer of filtering is a reduction of risk. The numbers we are seeing are lower, maybe lower than we were expecting," he said.

McCloskey, who chairs an independent panel of experts advising organisers on Covid-19 mitigation measures, said there was no way of being 100% sure that no athlete would be infected but measures in place were reducing that risk considerably.

Some critics have said the Games should not go ahead during a pandemic. Many Japanese are also worried the Games could become a super-spreader event.

Just four days before the opening ceremony, 68% of respondents in an Asahi newspaper poll expressed doubt about the ability of Olympic organisers to control coronavirus infections, with 55% saying they were opposed to the Games going ahead.

The European medicines regulator said on Monday it was evaluating an application to use immunosuppressant drug Kineret to treat Covid-19 in adult patients with pneumonia who are at risk of developing severe respiratory failure.

Facebook fires back at Surgeon General. Hear his response

US Surgeon General Dr. Vivek Murthy says social media companies have taken positive steps against the sharing of health misinformation but that "it's not enough" and responds to a Facebook official's claim that the Biden administration is trying to scapegoat the company after failing to meet their July 4 vaccine goal.

South Korea's military has recorded in biggest cluster of Covid-19 infections to date, with more than 80% of personnel aboard a destroyer on anti-piracy patrol in the Gulf of Aden testing positive.

While the 247 cases are not directly linked to new domestic infections, with the destroyer having left South Korea to start its mission in February, the surge comes as the country battles its worst-ever outbreak of Covid-19 cases at home, with another 1,252 new infections reported for Sunday.

Two more members of a Texas Democratic Party delegation of lawmakers who fled their state delaying passage of what they say are restrictive voting laws have tested positive for Covid-19, officials said on Sunday.

The Texas House Democratic Caucus said in an emailed statement that it's now providing daily Covid testing for the more than 50 lawmakers who fled Texas. So far, five delegation members have tested positive for Covid - and all are fully vaccinated.

Of the new cases, 26 originated overseas, and five were local transmissions, all in the southwestern border province of Yunnan, the National Health Commission said in its daily bulletin.

Another 17 asymptomatic coronavirus cases were detected on the mainland on July 18, compared to 27 a day earlier. China does not count asymptomatic infections as confirmed cases.

London clubbers on Monday flocked to one of the first rule-free live music events since the pandemic began last year, dancing through the night and rejoicing in human interaction as England lifted most Covid restrictions at midnight.

Britain, which has one of the world's highest death tolls from Covid, is facing a new wave of cases, but Prime Minister Boris Johnson is lifting most restrictions in England in what some have dubbed "Freedom Day".

Epidemiologists are generally skeptical that lifting restrictions is the right thing to do, but many young British people have had enough of more than 1 1/2 years of lockdowns, say they and crave a party."

I have not been allowed to dance for like what seems like forever," said Georgia Pike, 31, at the Oval Space in Hackney, east London. "I want to dance, I want to hear live music, I want the vibe of being at a gig, of being around other people.

"Beside the zest for fun, though, there was also clear concern about a wave of new cases - more than 50,000 per day across the United Kingdom."I am so excited - but its mixed with the sense of impending doom," said Gary Cartmill, 26.

After rushing to vaccinate its population faster than almost all other European countries, Johnson's government is betting that England can reopen as fully vaccinated people are less likely to get seriously ill with Covid-19.

Promoters of the event, Rob Broadbent and Max Wheeler-Bowden put up a video of themselves getting a Covid test and urged those told to isolate to do so.

British society appears split on the restrictions: some want tough rules to continue as they fear the virus will keep killing people, but others have chafed at the most onerous restrictions in peacetime history.

Business owners - including nightclubs, travel companies and the hospitality industry - have been desperate to reopen the economy while many students, young people and parents have quietly disregarded many of the most onerous rules.

Artists say the lockdown has been tough.James Cox, the 32-year-old lead singer of Crows, a post-punk band playing at The Oval Space, said the last time he had performed live was on Halloween 2020."Before this, I had a bit of apprehension that I was not going to like it because its been so long," Cox said.

"As soon as stood on that stage and started soundchecking, I was like: oh yeah I do like this, I do love this, I was like, this is my passion."

India reported on Monday 38,164 new Covid-19 cases in the last 24 hours, data from health ministry showed, with deaths rising by 499, lowest in over three months.

The eThekwini municipality said the city’s primary healthcare facilities, including mobile services, would be operational.

“Community vaccination sites will also be opened. Residents who are eligible to receive the Covid-19 vaccine are encouraged to register.

“The public is urged to be patient as there may be queues at the service centres given the backlog that built up over the past week. Residents are reminded to observe all Covid-19 protocols when visiting the service centres,” said municipal spokesperson Lindiwe Khuzwayo.

The city’s service units expected to be “back to normal operation”.

Dr Marlin McKay has dismissed the myth that Covid-19 can spread through mosquito bites, saying it is a respiratory virus that is airborne and spread between people through contact.

Facebook defended itself against President Joe Biden's assertion that the social-media platform is ‘killing people’ by allowing misinformation about coronavirus vaccines to spread, saying the facts tell a different story.

British Prime Minister Boris Johnson will self-isolate in line with national Covid-19 guidance, abandoning plans to take part in a pilot scheme that would have allowed him to continue working after being exposed to a person with the virus.

American tennis star Coco Gauff said that she will not compete in the Tokyo Olympics after testing positive for Covid-19.

The City of Johannesburg’s entire fleet of more than 100 ambulances has been grounded for a month, and public health patients now have to call on provincial services.

The situation comes after years of planning to transfer Emergency Management Services from Gauteng’s three metros to the province. Now both Ekurhuleni and Joburg have grounded their fleets, while Tshwane has applied to the province for its licence to operate its fleet of 70 ambulances to be extended to the end of this year.