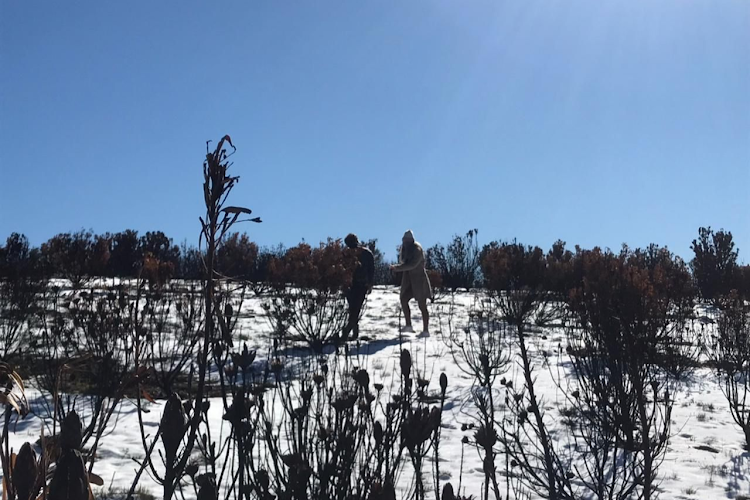 Esmarie Visagie and her husband GJ were in the Matroosberg mountains when she lost her treasured wedding ring.
Image: supplied

Finding a sentimental wedding ring lost in the snow on a mountain sounds as impossible as finding a needle in a haystack.

But not for a Cape Town couple and their 78-year-old grandmother.

When Esmarie Visagie lost her wedding while playing in the snow in the Matroosberg, she was devastated. It was designed for her using diamonds from her husband's grandmother's and mother's rings.

“I lost it on Wednesday. It just slipped off my finger and I didn’t realise it was gone until Friday. This ring is so special to me because my husband had it made for me. He had bought a diamond and used diamonds from his grandmother and mother's rings to complete it. I didn’t know how to break the news to the family that it was gone,” she said.

When she did tell them, the family decided to search for the ring. Grandmother Rachel Dunn joined the couple.

“We hired metal detectors and went to the area where we had been playing to search for it but didn’t find anything over the weekend.”

When Marie Fick saw the zipline, she told her daughter Mariaan: “I want to do it.”
News
6 days ago

Esmarie's husband, GJ, and his grandmother were not going to give up, so they went back to the mountain on Tuesday. Her husband had even taken the day off from work to look for the ring.

“By now the snow had melted and it was just wet mud. The metal detectors would beep at everything and I felt like it was hopeless, but we continued looking.

“And then gran called my name. She said, 'Hold out your hand, Esmarie.' When I did, she placed the ring on my palm,” Visagie said.

Dunn started crying when she found the ring.

“The ring is made up of sentimental pieces from previous generations and for gran to find it made the whole experience even more heartwarming. I think she was also just as surprised that we actually found the ring,” said Visagie.

She is holding tightly on to her treasured ring and is still in disbelief that it was found.

Visagie added that she will never wear it again when playing in the snow on a mountain.

The memory of looking into the barrel of a gun will always haunt Aneme Malan.
News
9 months ago

Alcohol was banned and borders were closed. But some have proven that you can't lock down love.
Lifestyle
5 months ago