Gauteng not through third wave yet as looting hinders vaccination drive

Gauteng as a whole is past the peak of infections but is still high-risk. File image.
Image: SUNDAY TIMES/SEBABATSO MOSAMO

Testing and vaccinations were also hard hit in KwaZulu-Natal, where the riots started — before spreading north — in the wake of former president Jacob Zuma's incarceration.

Prof Bruce Mellado, a member of the Gauteng premier’s advisory committee (PAC), said the province was not yet safe as they would only be able to fully understand the effect of the protest in a few days' time.

He said an analysis of the full extent of the looting, which would be measured in the next few days, would show the midterm effects of the looting. He said the province as a whole was past the peak of infections but was still high-risk.

“Outdoors is less dangerous, but any interactions indoors — like in malls or stores — are super-spreaders because they're places where there is no ventilation, people are close, they are touching each other, they are breathing on each other. And that’s where the problem emerges.

The Gauteng health department confirmed that the provincial vaccination programme was affected by the violent protests, with a number of sites forced to close.

Spokesperson Motalatale Modiba said the number of people presenting for vaccination was low across the province.

“In the Joburg district, six sites were affected in the greater Soweto area, while the Ekurhuleni district had two sites closed, in Vosloorus and Thokoza. One site was affected in Sedibeng district. The Tshwane and West Rand districts were not affected,” he said.

Modiba said no vaccines were wasted. 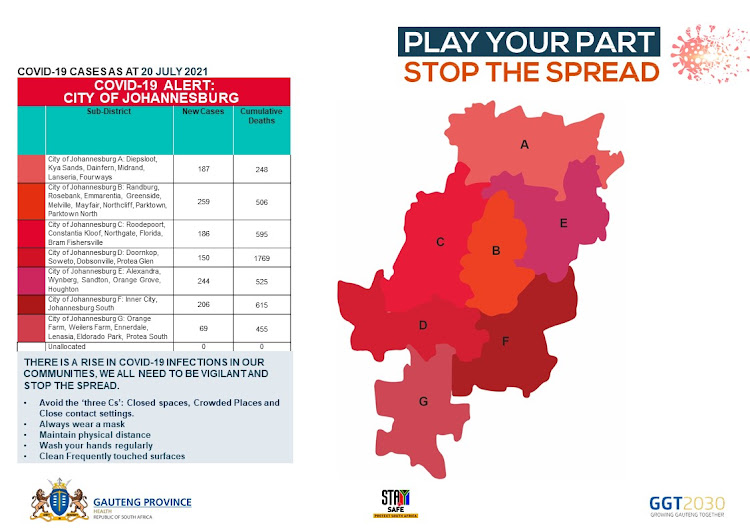 “The Gauteng government will soon be unveiling a huge programme that will see the vaccination drive being upscaled across the province, working with multiple stakeholders in the public and private sectors including faith-based organisations and NGOs.”

Modiba said all public vaccination sites in Gauteng accept walk-ins, whether people are registered on the EVDS or not.

“All people are assisted with registration and vaccinated, even those who are registered and waiting for SMSs. It is important that we get as many eligible people as possible to get vaccinated. Vaccines are important because they help protect against severe illnesses and hospitalisation.”

Meanwhile, insurer Liberty announced on Tuesday that it has opened its head office in Braamfontein to the public as a vaccination site in a bid to help the government accelerate the vaccination programme.

The insurer said its central position in Braamfontein will allow people living in the inner city and surrounding areas easy access to register and receive vaccinations.

“The vaccinations will be administered by Liberty's medical partner, Dis-Chem,” said Liberty.

Liberty's chief risk officer, Philip Harrison said they want to use their position in central Johannesburg to offer people a safe environment in which to be vaccinated.

The insurer said free, well-marked Liberty shuttles will operate to and from Park Station for people arriving by train and will be operating from 6.30am to 7.30pm.

There will be a shuttle leaving every 15 minutes from Park Station.

The KwaZulu-Natal health department says hospitals, clinics and community health centres are gradually returning to normal after a week of unrest, ...
News
10 months ago

'You don't have to disclose a lot of information': Kubayi urges looters to get tested for Covid-19

“I know some of them are scared they will be arrested as they get to the facilities, but from a health point of view, we really urge them to come,” ...
News
10 months ago

The vaccination rollout for all prisoners is now under way in SA's prisons, with the Johnson & Johnson vaccine provided by the health department for ...
News
10 months ago