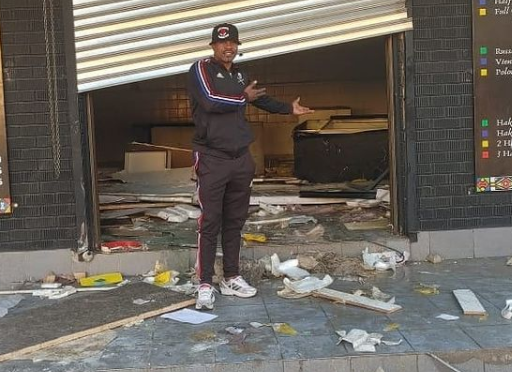 Former Orlando Pirates star Lucky Lekgwathi said on Tuesday some of the looters who destroyed his Grootman restaurant in Kliptown, Soweto were his friends.

He made the revelation during a discussion with Gauteng premier David Makhura about the recent unrest and destruction in the province.

Lekgwathi said he received a call from the centre manager last week to alert him to looting in the area.

“When I arrived, there was nothing inside the shop. It was sad because some of them are our friends, people who know me,” he said.

"This is just barbaric and selfish behaviour. This man was just trying to make a living," said one follower.
Sport
6 months ago

The criminality did not deter Lekgwathi from giving back to the community. He said he donated food parcels and blankets on Mandela Day on Sunday.

“It was to show them I forgive them. The message I gave to the pensioners was that as parents, from now on, whenever your child brings home something that is stolen please make sure you report them to the police,” he said, reiterating a plea made by the premier.

Makhura commended community members who took a stand against looting and protected infrastructure and local businesses.

The premier said most of the activists took on looters in the absence of the state security institutions, risking their own safety.

Makhura said while these efforts are commendable, the state needs to pay attention to the lack of capacity in security institutions.

KwaZulu-Natal and Gauteng are counting their losses after they were plunged into violence when scores of protesters looted businesses and destroyed properties and infrastructure.

The demonstrations started in KwaZulu-Natal and are linked to demands for the release of former president Jacob Zuma from the Estcourt Correctional Centre.

The premier admitted the unrest was a test for the state and said Gauteng will focus on rebuilding.

The violent protests and looting that broke out in the wake of former president Jacob Zuma's incarceration has cost the KwaZulu-Natal economy R20bn.
Politics
6 months ago

Additional security measures were in place at Gateway Theatre of Shopping in Umhlanga, north of Durban, on Monday amid fresh threats of looting, ...
News
6 months ago

Zandile Gumede has denied having any involvement in the recent destruction and looting in KwaZulu-Natal and Gauteng.
Politics
6 months ago