Health department says 128, not 500, bodies are in Phoenix mortuary after looting and unrest 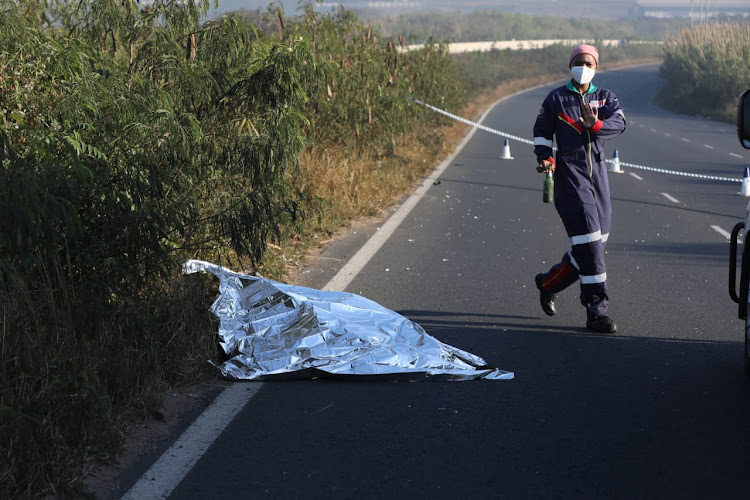 A body lies in a road in Phoenix, Durban, after violent protests and looting in the area.
Image: Sandile Ndlovu

Contrary to earlier reports, there are not hundreds of bodies piling up in the mortuary in Phoenix, north Durban, in the wake of violent scenes in the area last week.

The provincial health department said that claims the mortuary had reached its capacity of 500 bodies — made by the National Funeral Practitioners Association of SA — were “false”. And, the department said, the bodies are unlikely to all be related to the violence.

“Contrary to reports, the mortuary — which serves the wider eThekwini area and not just Phoenix — is now processing the mortal remains of 128 people. And these bodies may not necessarily be linked to the civil unrest from last week,” the department said.

Earlier on Wednesday, the National Funeral Practitioners Association of SA's president, Muzi Hlengwa, spoke to TimesLIVE after a visit to the mortuary, which he said had seen an influx of bodies since Monday.

“The capacity here is 500 bodies and right now they cannot collect any more bodies from hospitals in the area because there is simply no space. We are trying by all means to assist families and the department itself,” he said.

At the time TimesLIVE published the information, the health department had not yet responded to requests for comment.

However, health MEC Nomagugu Simelane visited the mortuary later on Wednesday and clarified that there were  35 bodies there that had not been identified.

“We decided to see for ourselves because we understand there has been quite an outcry about the fact that there’s a backlog in relation to families wanting [to see] their loved ones who passed on during the unrest last week.

“I want to indicate that as of this morning, we have a backlog of 128 bodies. But this backlog includes people who were killed or passed away elsewhere in incidents that are not necessarily related to the unrest.

“It also includes people who passed on in the different hospitals within the catchment area of Phoenix.

“Normally, this facility receives about 70 bodies a week, so when you compare the normal figures with what we now have, you can clearly see that there is a steep increase. But we are not in a position to indicate that all of those bodies are as a result of unrest,” she said.

Simelane batted away the funeral association's claims that 300 or 500 bodies were at the mortuary as a result of the unrest.

“That is not true. It’s 128 bodies that we have received. But we cannot necessarily say all of them are as a result of the unrest,” she said.

“We certainly do have a backlog because of the number of additional bodies that we have received. Therefore, we have identified a number of pathologists from different facilities, and have requested them to come and assist at this facility in particular.

“We are going to be using this facility and a few others so that we fast-track the process. We believe that by Friday we will have concluded the backlog, and will then start with the bodies that have been coming in from Friday moving forward,” the MEC said.

Racial tensions continue to boil over in the Phoenix area amid allegations that dozens of Africans were killed and denied entry into the area by private security companies and community members after the mass looting which erupted in the province last week.

A social media storm under the hashtag #PhoenixMassacre trended after the unrest.

Residents in Phoenix, north of Durban, took up arms to protect their families and community violence and looting gripped areas in KwaZulu-Natal and ...
News
1 year ago

Phoenix man was crushed to death by taxi rushing to loot mall: eyewitness

A speeding minibus taxi allegedly ploughed into and killed a Phoenix man while he was discussing wanton looting in his area with neighbours a week ...
News
1 year ago

A portfolio committee on police and the joint standing committee on defence on Tuesday condemned the “racial profiling and wanton violence disguised as protection of property” in the area.

Meanwhile, the Phoenix police station was temporarily closed on Wednesday after four SAPS members tested positive for Covid-19 on Tuesday.

In a statement police said the community service centre would operate from the guard house outside the police station.

On Tuesday KZN premier Sihle Zikalala visited the police station to get an update regarding the unrest.

Zikalala visited the families of two victims and said the police were investigating the deaths of 38 people from Phoenix and surrounding areas after the civil unrest last week.

Authorities are busy recovering a mountain of stolen goods after last week's looting spree in KZN and Gauteng.
News
1 year ago

The violent protests and looting that broke out in the wake of former president Jacob Zuma's incarceration has cost the KwaZulu-Natal economy R20bn.
Politics
1 year ago

Zandile Gumede has denied having any involvement in the recent destruction and looting in KwaZulu-Natal and Gauteng.
Politics
1 year ago