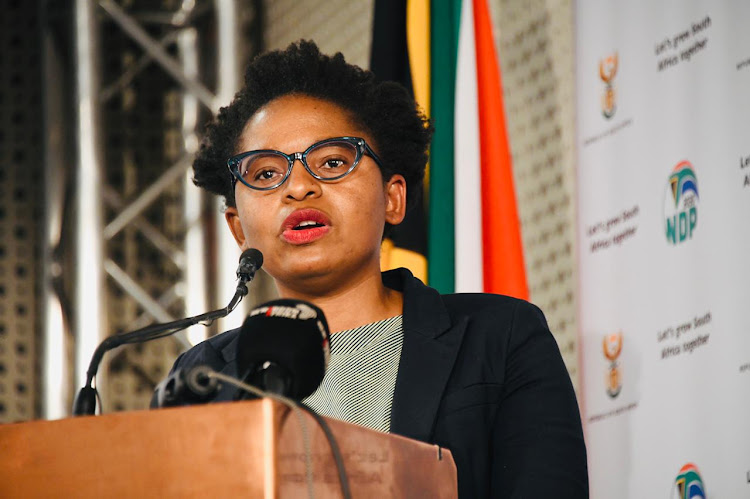 Acting minister in the presidency Khumbudzo Ntshavheni confirmed that fatalities in the recent unrest stand at 337. File photo.
Image: GCIS

The four suspects who have been apprehended in connection with the recent unrest are the key players in instigating violence in KwaZulu-Natal and Gauteng, says acting minister in the presidency Khumbudzo Ntshavheni.

Ntshavheni was briefing journalists on Thursday about the country’s security after the unrest.

“Our investigators are saying the four suspects are part of the key players [in the unrest] and that’s why they have been arrested,” she said.

Former Ukhozi FM DJ and staunch supporter of former president Jacob Zuma, Ngizwe Mchunu, is one of four suspects arrested in connection with the unrest.

Mchunu appeared briefly at the Randburg magistrate’s court on Tuesday. He faces a charge of incitement to commit violence. His case was postponed to next Wednesday and he was remanded in police custody.

The four are alleged to be among 12 instigators responsible for the looting.

The NPA on Thursday said it does not have evidence that proves that those who have been arrested committed crimes against the state, treason or ...
News
1 year ago

Ntshavheni said there were no new incidents of unrest reported in both provinces, and confirmed an increase in the number of fatalities, which stand at 337.

At the height of the unrest, President Cyril Ramaphosa announced the deployment of the military to areas most affected. Government said 25,000 soldiers were deployed.

“When deployment is approved they look within their own budget to see what resources they need and submit that to the president to approve, and also to parliament in line with the Act. We are talking of estimate amounts because the deployment continues and is revised.

“The estimate submitted to parliament for the 25,000 for the initial period of one month, and they are revising the submission to increase the term of deployment, is R615m.”

National Assembly speaker Thandi Modise has called for an extraordinary extended debate on the unrest, looting and destruction of property in parts ...
Politics
1 year ago