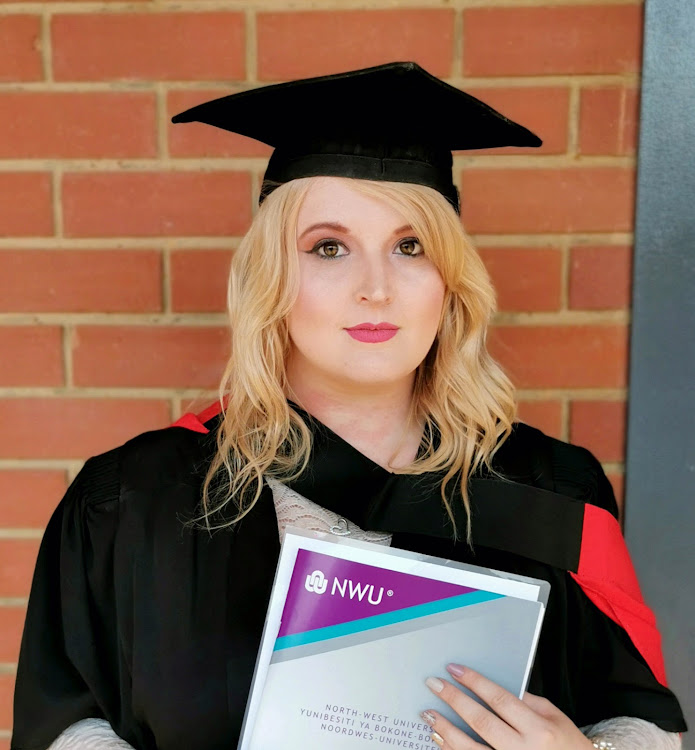 Dr Nicolene Steyn is the youngest person to obtain a doctoral degree at NWU's faculty of law.
Image: supplied

When Dr Nicolene Steyn realised she may become the youngest person to obtain a doctoral degree at North West University’s (NWU) faculty of law, she thought how proud her father would have been.

When she graduated and made history by completing her PhD studies at the age of 25 and within two years of registration, Steyn video called her mother.

“When I video called my mother to tell her, her face and tears of sincere gratitude composed a lasting feeling of humility at the weight of the achievement, given my unlikely circumstances.

“To me, the achievement means I gave my best, and it fills me with hope — not only for myself and my future, but for those who, however unfortunate their circumstances, are also giving their best and faithfully pursuing a better future,” she said.

Steyn grew up on the “under-developed” side of the proverbial tracks in Zeerust, called Sandvlakte.

“My family, which comprised my father, mother, and two older brothers, was very poor. My father, the sole breadwinner and a retired mechanic, was a ‘recycling entrepreneur’, a fairly rare trade at the time. This entailed him driving a peculiar-looking old green truck around town and collecting discarded boxes, cans, plastic and glass from shops.

“He also collected old exam papers and the like from schools. The latter, and his unique personality, made him an endearing and constant character in town for more than 30 years until his death in 2016,” she said.

Selling the recyclables was the family’s only income, and was unreliable given the limited supply and cost of fuel.

“From a young age I realised I wanted to make a difference for my family. I believed that pursuing an education may one day offer me opportunities to do that. I worked hard at school, and enjoyed every moment. The awards and accolades did not matter too much but only confirmed what I needed to know: I was doing my best, and my best is what’s needed to make a difference.

“I was approached by a foundation known as the ‘Ouers, Onderwysers en Oud-leerder Stigting’ [parents, teachers and past pupils' foundation] while attending High School Zeerust. They aim to assist financially constrained academic performers to obtain tertiary education. Early in my matric year, they assisted me in applying to NWU.

* HISTORY WAS MADE TODAY * Still celebrating with our newly graduated doctorate students, we want to share the joy of...

“I received a bursary from the Mahikeng campus of NWU and spent my first year of my LLB studies there. I transferred to the Potchefstroom campus the following year and was wholly reliant on the financial assistance of the foundation. My parents helped where they could, despite their limited means.”

In her third year of studies, and weeks after her 21st birthday, Steyn’s father sadly passed away from a stroke.

“My life changed forever. I no longer had my father, whose love I had relied on heavily throughout my life. We held his funeral on the Monday following his death the previous Thursday, and I returned to university early on the Tuesday morning. There was no time for mourning. I still had to do my best and my best was all I felt I had left.

“Having to focus on my studies and being more financially constrained, I saw my family rarely. I obtained my LLB in 2017 with distinction.

“I discovered my love for legal research while writing my LLB mini-dissertation, and commenced with a master’s (LLM) through research dissertation degree at NWU. I received several bursaries and financial aid from NWU, and was also working as an academic assistant and research assistant to Prof Christa Rautenbach at the faculty of law.

“With the kind and diligent supervision of Dr Brews Soyapi, I was able to complete a two-year LLM degree within one year.”

Cap that! Mom and daughter graduate together at UCT

A promise a Cape Town mother made to her daughters - that she will enrol at university with them - came to fruition in the past week when she ...
News
4 months ago

Rautenbach introduced her to Prof Anél du Plessis. “She had been granted a research chair by the National Research Foundation (NRF), and was looking for PhD candidates. She graciously offered me an opportunity to be a part of the prestigious SARChI Chair in Cities, Law and Environmental Sustainability (CLES). I joined the team in 2019, and received generous bursaries from the NRF and NWU faculty of law at CLES.

“Having been diagnosed with depression and an anxiety disorder at this stage, I knew I would have to work even harder to give my best.”

Steyn is a post-doctoral fellow at CLES, where she is continuing her research.

“I have been lecturing this year, presenting at international conferences and developing research articles for publication. I am actively involved in several projects at CLES and am planning a colloquium on my research for August 20 on the potential of technology and innovation towards realising the constitutional water right in SA.”

Steyn said obtaining her PhD made her realise success also takes a village.

“I am so grateful to everyone who formed a part of my journey, especially my family and the Zeerust community who have been cheering me on and supporting me. I am particularly grateful to those who saw potential in me and provided me with the opportunities I needed to achieve this. Finally, I am grateful to the CLES chair, all colleagues, and NWU, which has been an enduring companion on my journey.”

The University of Cape Town is opening an online high school in 2022, it announced on Wednesday.
News
4 months ago

Responsibility or burden? Study weighs in on contentious ‘black tax’

A graduate has found that while most regard it as a family obligation, based on ubuntu, others find it burdensome
News
5 months ago

Congratulatory messages have been pouring in for mineral resources and energy minister Gwede Mantashe after he obtained his Master of Business ...
Politics
5 months ago