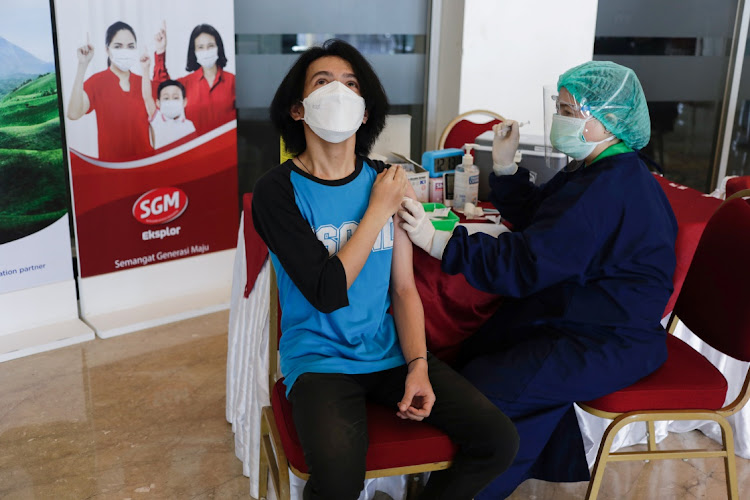 A person reacts as he receives a dose of China's Sinovac Biotech vaccine against the coronavirus disease (Covid-19) during a mass vaccination program at Ancol amusement park in Jakarta, Indonesia, July 24, 2021.
Image: REUTERS/Willy Kurniawan

The total number of Covid-19 related deaths has increased by 413, bringing the national death toll to 69,488.

The Tourism Business Council of SA (TBCSA) has called on the government to lift the alcohol sales ban and restrictions on Gauteng travel.

Its call preceded President Cyril Ramaphosa's “family meeting” on Sunday, when he will either have to ease or extend the level 4 lockdown imposed four weeks ago.

In a statement on Friday, the TBCSA said the travel, tourism and hospitality sector had seen major financial losses in the last month, and it was concerned these would lead to job losses.

The council said major hotel groups have closed all or some of their properties due to the restrictions.

Jordan will start vaccinating children aged 12 years and older against Covid-19 from Sunday, the state news agency said on Saturday.

Children can be given the Pfizer-BioNtech vaccine with the approval of a guardian with no prior appointment necessary, the agency quoted the health ministry as saying.

The decision comes as Jordan lifted most restrictions at the start of July, reopening gyms, pools and night clubs at hotels after cases dropped from a peak in March when several thousands of new cases were recorded daily.

Several other countries in the region are vaccinating children, including Israel, the United Arab Emirates and Saudi Arabia.

Russia on Saturday reported 23,947 new coronavirus cases and a repeat all-time high in the number of deaths related to the virus, at 799.

Russia has been in the grip of a surge in cases that authorities blame on the more contagious Delta variant, though some officials have suggested in recent days that cases, at least in Moscow, have started to decline.

Tunisia recorded 317 coronavirus-related deaths in the last 24 hours, a daily record since the start of the pandemic, the health ministry said on Saturday.

The ministry also reported 5,624 new cases, increasing concerns about the country's ability to fight the pandemic, with intensive care units in hospitals completely full and a lack of oxygen supplies. The vaccination campaign is moving slowly.

The World Health Organisation (WHO) says the daily Covid-19 death tally in Tunisia is now the highest in Africa and in the Arab world.

The total number of cases since the start of the pandemic has reached about 560,000, with more than 18,300 deaths, out of a total population of 11.6 million.

This month several European and Arab countries have sent medical aid and more than three million doses of vaccine to help Tunisia tackle the rapid spread of the coronavirus.

Vietnam's health ministry reported 7,968 coronavirus infections on Saturday, a record daily increase and up from Friday's record of 7,307.

More than two-thirds of the cases are in Ho Chi Minh City, the ministry said in a statement.

After successfully containing the virus for much of the pandemic, the Southeast Asian country has been facing a renewed outbreak of the virus, with southern business hub Ho Chi Minh City and surrounding provinces accounting for most new infections.

The ministry on Friday said it would extend a lockdown in the city until Aug. 1 and impose stricter restriction measures in the capital Hanoi from Saturday. The measures include a stay-home order, a ban on gatherings larger than two people and the suspension of public transport.

The capital city on Saturday also suspended motorbike delivery services, including by companies such as ride-hailing firms Grab and GoJek, adding to its existing restriction measures.

The National Assembly, the country's lawmaking body, decided to cut short its meeting in Hanoi by three days to end on July 28, due to the outbreak.

Vietnam has so far recorded 90,934 coronavirus infections and at least 370 deaths.

Second chance for 33,539 teachers who would be out of work because of Covid-19

The basic education department has spent R2.4bn to save teachers' jobs during the Covid-19 pandemic.

This was revealed by basic education minister Angie Motshekga at a briefing on Saturday about schools' readiness to reopen once they get the go-ahead from President Cyril Ramaphosa.

Motshekga said the department had saved 33,539 posts so far by allocating money to provincial education departments for teachers employed and paid by governing bodies.

She said schools were under enormous pressure because many parents were unable to pay fees as a result of Covid-19 and lockdown-related economic pressure.

Second chance for 33,539 teachers who would be out of work because of Covid-19

Russia on Saturday reported nearly 24,000 new Covid-19 cases and a repeat all-time high in the number of daily deaths, at 799, but some officials suggested that infections, especially in Moscow, may have peaked.

Russia has been in the grip of a surge in cases that authorities blame on the more contagious Delta variant.

The coronavirus task force confirmed 23,947 new Covid-19 infections across the country in the last 24 hours, down around 5% on the previous week. In Moscow, 3,376 new cases were reported, down 26%.

“On the whole, we can see that there is a decrease in the incidence of disease,” he was quoted on Friday as saying. “This, of course, is positive, it means that we have passed these peaks, and I hope that there will be further improvement.

“The total number of cases recorded since the pandemic began in early 2020 in Russia stood at 6,102,469 on Saturday, out of a total population of around 144 million.

The national death toll linked to Covid-19 rose to 153,095, with the 799 fatalities recorded on Saturday the highest since July 16, which marked an all-time high.

The federal statistics agency has kept a separate count and said Russia recorded around 290,000 deaths related to Covid-19 from April 2020 to May 2021.

The minister was giving a briefing on Saturday about schools' preparedness to welcome pupils back amid the third wave of Covid-19.

The minister said up to 60% of the school year had been lost in 2020 and disruptions to the school calendar this year had already pushed the academic year back.

Motshekga said she was especially concerned about primary school pupils. “If I'd had my way I would have brought them back in the second term,” she said.

“But the provinces said they needed more time to cope with [incorporating Covid-19] protocols for primary schools.”

With people choosing takeaway and online shopping, waste collection centres in Taiwan are filling up. The amount of food packaging jumped 85% in capital Taipei compared to the same period last year, according to officials.

Meals on wheels for residents in virus-hit Cambodia

Russian World War 2 veteran Nikolai Bagayev feels like he has cheated death twice. This time though, the enemy was not the German troops invading the Soviet Union but Covid-19.

Giving a briefing on schools' preparedness to welcome pupils amid the third wave of Covid-19, Motshekga said: “We are ready.”

She said the reopening would only be confirmed on Sunday, when President Cyril Ramaphosa is expected to update the nation about the state of disaster.

“Depending on confirmation by the president tomorrow after cabinet, as a sector there is agreement across the board that we are ready for the reopening of schools on Monday, 26 July 2021,” she said.

Indonesia's Bali running out of oxygen as government ponders curbs

The Indonesian island of Bali is running out of oxygen for its Covid-19 patients as infections surge, the chief of its health agency said, as Southeast Asia's biggest country struggles with the region's worst Covid-19 epidemic.

Bali, famous for its tourist beaches and temples, along with the main island of Java and 15 other regions are under tight coronavirus restrictions, due to expire on Sunday. The government is debating whether to extend them or not.

“We've had an oxygen shortage since July 14 and it's getting critical by the day because of a surge in new cases,” Ketut Suarjaya, the head of Bali's health agency, said as quoted by Antara state news agency as saying on Friday.

“There's an oxygen crisis in Bali.”

Indonesia, the world's fourth most populous country, has had more than 3 million coronavirus infections and 80,598 deaths according to official data. The spread, driven by the Delta variant, has shown no sign of slowing.

Research organisation Our World in Data said the country had a death rate three times higher than the global average.

The debate over coronavirus restrictions has pitted health experts, who say it is premature to ease curbs during the surge of infections, against employer groups that have warned of mass layoffs unless the curbs are relaxed.

Suarjaya said patients in Bali needed 113.3 tonnes of oxygen on Thursday, while hospitals only had 40.5 tonnes. He was not immediately available for comment on Saturday.

Oxygen shortages have also been seen on Java. The government has begun to import oxygen supplies from countries such as the US and China.

Infections have been on the rise in recent weeks, reaching 1,979 on Thursday, the highest since January.

The number tends to be lower on holidays and weekends due to less testing.

China administered a total of 1.5249 billion doses of Covid-19 vaccines as of July 23, data from National Health Commission showed on Saturday.

Pfizer and German partner BioNTech said on Friday the US government has purchased 200 million additional doses of their Covid-19 vaccine to help with paediatric vaccination as well as possible booster shots — if they are needed.

'It's time to start blaming the unvaccinated folks': Alabama Governor