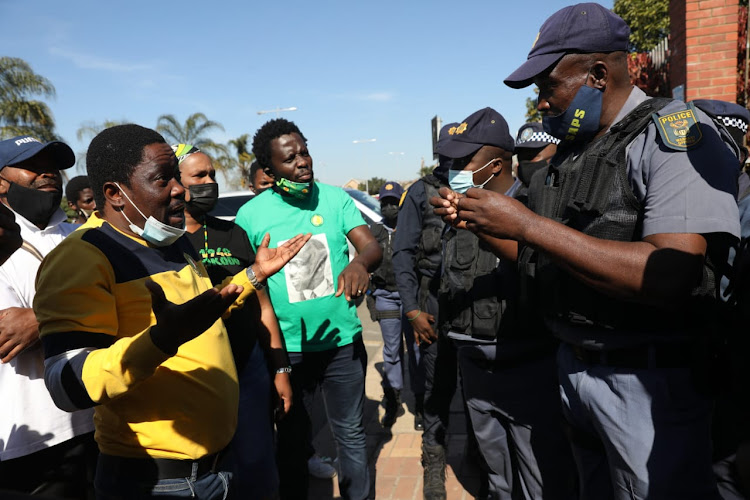 Police speak to a group of protesters asking them to separate from family and friends of seven suspects who are expected to appear in the Verulam magistrate's court on Monday in connection with unrest and alleged murders in Phoenix during recent civil unrest.
Image: Sandile Ndlovu

A large police and army presence was on high alert outside the Verulam magistrate's court on Monday, where seven people who were arrested in Phoenix on Friday after civil unrest in the province are expected to appear.

A crowd of supporters from Phoenix arrived carrying boards and signs that read “All lives matter” and “No to racism”.

A heavy police and military presence outside the Verulam Magistrates court where the 7 people arrested in connection with the #Phoenix murders will be appearing today.@TimesLIVE pic.twitter.com/bZXqDHHbmS

Alice Govender, family media spokesperson for two of the suspects, whom she would only identify by their first names, Owen and Seelan, said they had come to show support for their loved ones.

Govender said the two men had not been charged with anything relating to the murders.

“Today we have supporters, friends and family from our community of Phoenix. We are here to see that Seelan and Owen are granted bail. There is no charge that we know of that has been opened against them and I think that it's quite unfair what is unfolding and happening to them,” she said.

Alice Govendor, speaking on behalf of the supporters, fily and friend S who traveled form Phoenix this morning.

Govendor says they have come to support the law and order of South Africa. @TimesLIVE pic.twitter.com/5l0KhMi8dD

Police had to separate a group of ANC and EFF protesters who were singing struggle songs, including Umshini wami, and holding placards bearing the face of former president Jacob Zuma, and the supporters of the seven suspects.

Police separate protesters outside the Verulam magistrate’s court on Monday where seven people are expected to appear in connection with unrest in Phoenix @TimesLIVE
Video: Sandile Ndlovu pic.twitter.com/uIppAglLrr

“The rhetoric of a rainbow nation is why we're here. Rainbow nation is on paper, it is not in practical terms. We need to live together in harmony and understand that we are all South Africans,” said Mkhize

Another protester, Nkulu Ngwenya, who claimed that his vehicle was damaged last week by Phoenix residents for “no apparent reason”, said he'd come to ensure that those responsible were made to pay.

Ngwenya said he was driving back to his KwaMashu home from the Phoenix Plaza when his bakkie was stoned near the shopping centre.

“They were swearing and shouting at me to stop my car, but as soon as they threw stones at my car I decided to ignore them and left.

“The police presence here is really unnecessary, in my opinion. Even the army is carrying weapons as if they are going to war.”

He said the police failed to help when the communities were under fire.

Tensions still high in Phoenix as schools are set to reopen

They claim to care about the poor. They don’t. They want to loot, oppress and get away with it
Opinion & Analysis
2 months ago

Phoenix murders: 'Innocent people were killed for no good reason'

In 2004 Delani Khumalo played an Indian man in a theatre production to celebrate 10 years of democracy in SA.
News
2 months ago