Not only has a major taxi route in the province been closed, but even clinics are empty because health workers cannot get to their places of employment 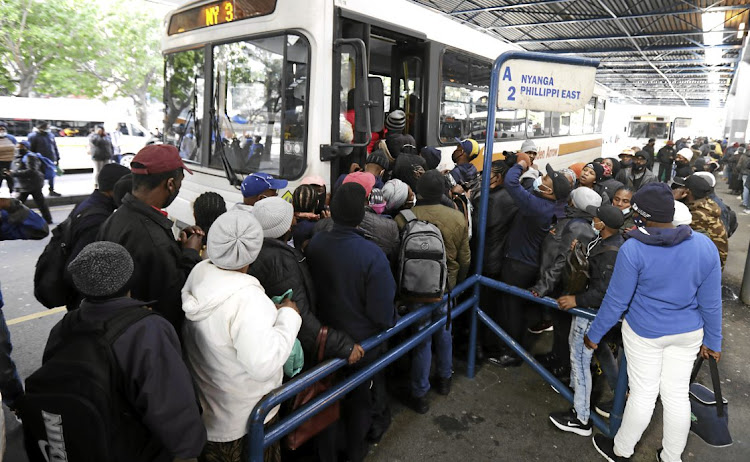 Commuters queue to board a bus during the ongoing taxi war in the Western Cape. File photo.
Image: Esa Alexander/Sunday Times

“This is putting a strain on my pocket. I must pay someone in a car to take me to the bus,” said Bulelani Mthombo, who lives in Nyanga and works in the Cape Town CBD.

“Not only am I paying more money, I am putting my life and that of the owner of a car at risk because if taxi drivers notice that, it means we are both dead.”

Mthombo is among many Capetonians who have not only been living in fear because of taxi violence that has hit the city, but has also been massively inconvenienced by it.

The Gugulethu Community Health Centre, which renders service to thousands of patients from Gugulethu, New Crossroads, the KTC shack settlement and Philippi, was forced to close on July 19.

“I have been standing at this gate from July 19 telling patients they cannot be treated because there is no staff inside,” said a security guard who works at the centre.

Cape taxi war: ‘I have lost my daughter to this senseless violence’

Nokuphumla James has been praying for her family’s safety since the war between taxi associations in the Western Cape reignited three weeks ago.
News
9 months ago

Nombulelo Nzuza, 45, a diabetic patient who had arrived to collect her medicine, was worried.

“I don’t know how long I will survive without my medication. I thought the security guard was making a joke when he said I must return home. It was after he let me in that I realised there were no staff inside.”

Petronella Mavuso said she was concerned about her heavily pregnant sister.

The continuing taxi violence has been caused by a disagreement over the lucrative Paarl-Mbekweni and Belville route, which has since been closed by the Western Cape transport and public works department.

The violence has not only hit the two taxi associations. Alternative transport including buses and private cars have been attacked for ferrying passengers left stranded by taxis.

Although police are reluctant to provide information on the number of casualties, citing a moratorium on the release of statistics on the matter, it is believed about 23 people have died since the most recent violence broke out this month. According to estimates, at least 82 people have been murdered this year because of the violence.

A source said three men believed to be taxi hitmen were arrested on July 15 after the car they were driving was detected on CCTV. Metro police officers pulled over the suspects and found them in possession of firearms.

Asked how many people have died in the violence and the number of those arrested, provincial police spokesperson Capt FC van Wyk said: “Kindly be advised that due to a moratorium, crime statistics cannot be disclosed. Statistic are released on a quarterly basis by the minister of police.”

Transport minister Fikile Mbalula has held talks with the leaders of the two taxi associations and the SA National Taxi Council.

“We are here to reinforce the efforts of the province and ensure an intergovernmental, multidisciplinary and targeted approach to safety, which is the only way to restore law and order in the taxi industry,” Mbalula said on July 18.

“This is not the first time the national government has intervened in the affairs of the taxi industry in the Western Cape. We were here last year and were encouraged by signs that the industry had turned over a new leaf. The leadership of Cata and Codeta even sat side by side at the national taxi lekgotla in August 2020.

“All these were positive signs the industry was headed in the right direction. We are disappointed by the recent turn of events. Those who choose to resolve the industry disagreements through the barrel of a gun will not be shown leniency. They will face the full might of the law.”

Codeta spokesperson Andile Khanyi said the association was “sick and tired of this violence. It affects innocent lives”.

Cata spokesperson Andile Seyamo said it seemed operators did not adhere to the restrictions and permissions of their operating licences.

The Nyanga bus terminus, which is adjacent to the Cata taxi rank, is among the most affected. Both are deserted, with soldiers accompanied by police keeping an eye on the area.

A Cata taxi driver, who spoke on condition of anonymity, blamed Codeta for the violence. “We [Cata and Codeta] agreed to share the Paarl route. But Codeta turned away our taxis when we were dropping off passengers.”

He said it was agreed Cata taxis would take passengers from Nyanga, Belville and Kraaifontein to Paarl but come back empty.

“As per the agreement, I took passengers from Bellville to Paarl. While I was offloading I was told not to come back. I asked why. I was told to do as I was told. This is how the violence started,” he said.

My husband is on the run. We don’t know where he is. They are using guerrilla taxis. That is the kind of life they are living.

A Codeta taxi driver, who also did not want to be named, said Cata was tasting its own medicine.

“Many routes are controlled by Cata in the province. That has been the case for years. For example, we [Codeta] do not pick up passengers coming to Khayelitsha in Nyanga after we have dropped off. But they [Cata] take people from Site C taxi rank, which is in Khayelitsha, to Nyanga. They have been doing that for years.”

A woman whose husband is a taxi owner said the meetings and ceasefires were not helping the situation.

“My husband is on the run. We don’t know where he is. They are using guerrilla taxis. That is the kind of life they are living.”

“Many innocent passengers, private taxis and bus drivers have been targeted, shot at and violently attacked, allegedly by Cata and Codeta members, in the past two weeks. Many commuters have lost hope in the transport sector,” it said.

“This is a total disregard and infringement of people’s democratic right to travel in a safe and healthy manner in any mode of public transportation of their choice.

“Our vision of public transport is that it should all be under state control and not for profit — where it is under direct workers’ and community control, where communities are integrated and close to places of work, education and leisure, where the rights of commuters and of  transport workers are respected, where transport is organised on a rational basis and the wages and rights of all transport workers are guaranteed and not linked to making trips to meet targets of private owners.

“No retrenchment of any transport workers. All transport should be on a rational basis and organised to minimise the impact on the economy.”

On July 24, the general secretary of the SA Federation of Trade Unions, Zwelinzima Vavi, and UDM leader Bantu Holomisa convened a meeting with Codeta and Cata leaders in Site C in Khayelitsha. The two associations explained what had led to the situation, tabled a way forward and agreed on a ceasefire.

As of the end of last week, brutal taxi violence had claimed the lives of 83 people since the start of the year.
News
9 months ago

Cape taxi violence 'goes back very long time ... but no-one ever gets convicted'

Rivalry between Cata and Codeta goes back to the 1990s, and in 2005 then premier Ebrahim Rasool established a committee of inquiry to investigate it.
News
9 months ago

'I fear for my safety but must put bread on the table': Women walk to work as taxi violence rattles Cape Town

'I know of women walking up to 50km through the night, or in the rain, to get to work': taxi war in Cape Town
News
9 months ago