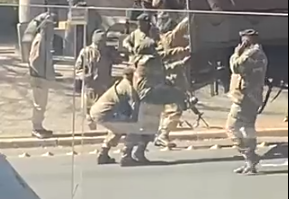 A video of the soldier being helped into a truck has been shared online.
Image: Twitter

Two years after the SA military brought the TL to a standstill with a clip of a recruit failing at several tasks, a new soldier has gone viral.

Thousands of soldiers have been deployed to the streets to quell possible violence and recover goods that were looted during unrest earlier this month, which means you may see some in your area.

One social media user did, and noticed one soldier seemed to be struggling to climb into a military truck.

In a clip of the incident shared on social media this week, a fellow soldier can be seen trying to assist his struggling comrade while others watch.

In the end, they both give up.

More footage of the crack #SANDF troops , we are safe . pic.twitter.com/xgjGvVRCam

The video drew sharp reactions online, with many slamming how “unfit” the soldier appeared to be and questioning whether the military had strict enough criteria.

Others claimed it was harsh to judge the entire military from a clip of one soldier.

So no fitness test anymore?🤔

I guess physical fitness is no longer a job requirement for the army!!

So you are going to judge the whole of SANDF ( Air Force, Navy and Millitary) by a few Millitary personnel?

This would be me if I was in the SANDF shame.

I'd get deployed every chance I get, and run in the opposite direction when 16 year old rebels come to attack us, then come back to SA and buy a Golf 7 GTi to stunt on ya'll. pic.twitter.com/3Yy1BFJIOj

In 2019, video clips of a soldier unable to keep up during a training session went viral on social media, making the man’s name, Mabena, a nickname for any kind of moemish or failure.

In one of the videos, Mabena is seen trying to climb a wall. He doesn’t make the grade and a person is heard saying: “Mabena, please disappoint me again. I knew it, Mabena.”

“That Mabena. He’s just tall and lazy for nothing,” the person said in another clip.

'Mabena, please disappoint me again, I knew it, Mabena.'
News
2 years ago

An alleged looter who filmed himself eating cake has gone viral.
News
6 months ago

An investigation has been launched after police officers at the Atteridgeville police station were filmed allegedly ignoring a woman’s plea for help.
News
7 months ago