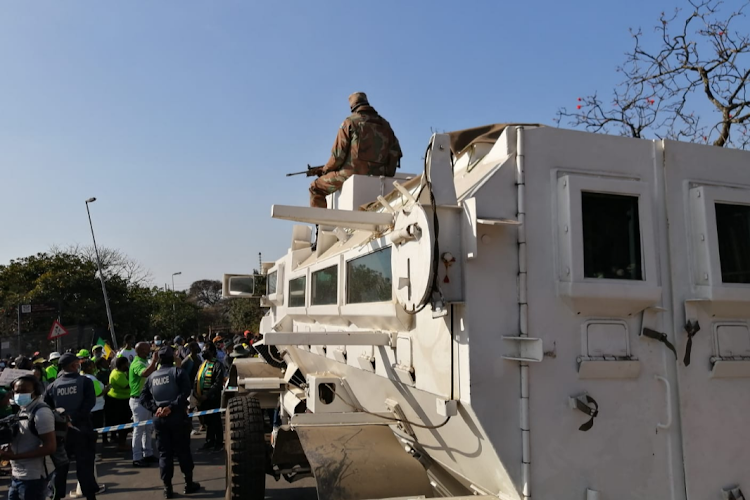 A strong army and police presence outside the Verulam magistrate's court on Friday keeps an eye on people calling for justice in connection with the deaths in Phoenix during the recent unrest.
Image: Orrin Singh

The identities of three men facing charges of murder and attempted murder in relation to the recent violent unrest in Phoenix, north of Durban, have been revealed.

Dylan Govender, 29, Ned Govender, 30, and Jeetendra Jaikissoon, 39, who are all facing a murder charge, appeared in the Verulam magistrate's court, north of Durban, on Friday ahead of seven other accused who are expected to appear later. Dylan Govender is also facing an attempted murder charge.

They were remanded for a formal bail application on Tuesday.

Alfonzo Naidoo, 23, was charged with possession of suspected stolen goods and his matter was adjourned to August 25. He was granted bail of R2,000 during his first appearance.

The 10 accused initially appeared on Monday but were not allowed to be identified due to investigators still needing to do an identity parade.

A strong police presence inside the courtroom coincided with a contingent of police and SANDF members who closely monitored large crowds gathered outside the court. The crowds chanted struggle songs and held up placards denouncing racism.

Crowds have gathered outside the Verulam Magistrates Court, north of Durban, where 10 people are expected to appear on charges of murder, attempted murder and possession of unlawful firearms and ammunition in relation to the incidents of public violence in #Phoenix @TimesLIVE pic.twitter.com/iQzatgdLSO

Appearing in the capacity as provincial executive committee member, education MEC Kwazi Mshengu said members of the ANC were present to express their concern about the killings after the unrest in the province two weeks ago.

He said the isolated incidents in Phoenix should not regress South Africans from building a nonracial and united country.

A man who would only identify himself as Zain said he was at court to support his friends who were arrested.

“There is a lot of misinformation going around. We are not racist in Phoenix, we live together with black people, our children go to school together. These were isolated incidents and we cannot say everyone is the same,” he said.

All my hopes were on him, says mom of son killed in KZN unrest

A large police and army presence was on high alert outside the Verulam magistrate's court on Monday, where seven people arrested in Phoenix on Friday ...
News
1 year ago