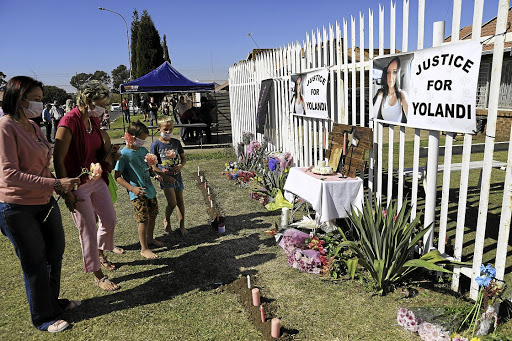 The family of Yolandi Botes has offered a R50,000 reward for information that could lead to the arrest and prosecution of the suspects responsible for her murder.

Botes went missing on April 26 after calling an e-hailing service vehicle at Johannesburg’s OR Tambo International Airport. She had travelled from George to Gauteng.

Free State police later confirmed that Botes’s body parts were found in the Vaal River next to Villiers.

A day before her body was found, about 125km away, a receptionist at a Kempton Park guesthouse near OR Tambo airport made another gruesome discovery. When she opened up on the morning of May 3, she walked into an empty and blood-smeared room. Here investigators would later find a knife under a mattress, and a chair, bizarrely wrapped in a blanket, in the shower cubicle.

Private investigator Mike Bolhuis of Specialised Security Services (SSS) was hired by the Botes family to piece together what happened in the week she went missing, and whether there is a link between her murder and the blood-soaked guesthouse room.

Matching tattoos of her and her husband's names helped police identify Yolandi Botes, whose body was chopped up and thrown into the Vaal River in a ...
News
1 year ago

Investigations have since revealed the blood found at the guesthouse was not that of Botes, said SSS lead investigator Odette van Staden.

“That scene has been removed from the investigation. It was the DNA of a man found in that room and it has no relation to the murder of Botes,” Van Staden said.

Gauteng police spokesperson Capt Mavela Masondo confirmed the samples taken at the guesthouse did not match those of Botes.

“Police in Gauteng had opened an inquiry pending the DNA results. The inquiry will be temporarily closed while investigations in the case of the murder continue in the Free State,” he said.

Van Staden said there were no leads in the investigation.

'I love you my child': Emotions run high at memorial for murder victim Yolandi Botes

Emotions ran high outside the family home of Yolandi Botes, whose body parts were found in the Vaal River last week.
News
1 year ago

'It should have been me': shattered husband on murder of Yolandi Botes

'I can’t believe that the person who did this is able to sleep at night,' says her sister Mariska Oosthuizen.
News
1 year ago

The boy's father, Nantes Nortjé, was charged following his disappearance and found guilty of his murder, although at the time the body had not yet ...
News
11 months ago