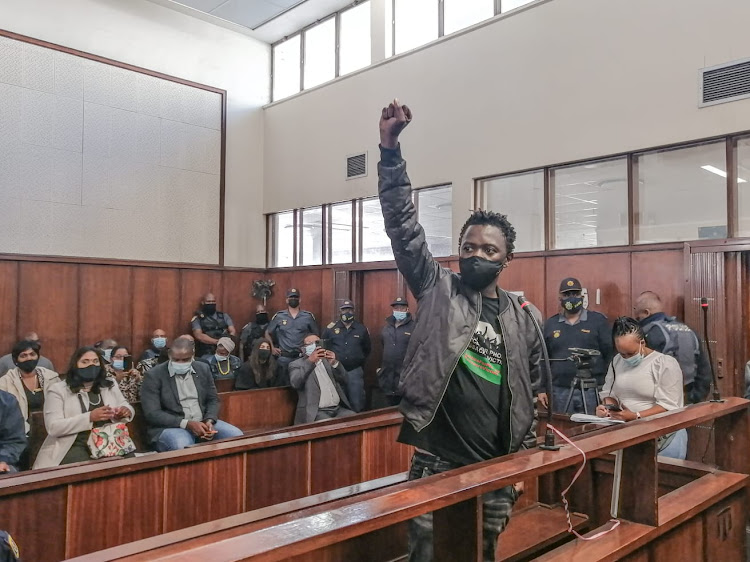 Jackie Shandu, the convener of a coalition of civic groups under the banner #JusticeForPhoenixMassacreVictims, will remain in police custody until his next appearance on Friday.

Shandu appeared in the Durban magistrate’s court on Tuesday facing charges related to incitement of public violence and racial hatred.

This after he handed himself over to police on Monday after racial slurs on Thursday when he shouted “One settler, one bullet. One Indian, one bullet” to a gathering, who repeated the remarks after a march to the Durban city hall.

The state suggested an adjournment to Monday for verification of Shandu's address and full name.

According to the state, Shandu's legal name is Gift Hadebe.

“His address is here in Morningside. About 2km from the court. Home affairs is right here and there are no queues in home affairs. I don't know why the state needs so long to verify these details.”

Magistrate Vanitha Armu adjourned the matter to Friday, adding that the state had sufficient time to verify Shandu's details between now and then.

Jackie Shandu of the #JusticeForPhoenixMassacreVictims coalition appears in the Durban magistrate’s court for his statements on Indians which were seen as incitement of violence. Case has been adjourned to Friday for the state to verify his address and full name. @TimesLIVE pic.twitter.com/sArHcDhDr5

At least two organisations have opened criminal charges against Shandu, including the Community Policing Forum and African Democratic Change.

On Friday, Shandu retracted the statement on Twitter, saying he made “some problematic remarks which, with the benefit of hindsight, should not have been said”.

“I said ‘One settler, one bullet. One Indian, one bullet’. I want to withdraw those remarks because I don’t condone violence and I see the potential they have to sort of inflame already existing racial tensions.”

Earlier on Tuesday, the coalition’s spokesperson, Phezukonke Mthethwa, said his coalition would be present at court to call for Shandu’s release.

“The #JusticeForPhoenixMassacreVictims notes the abuse of the criminal justice system given the fact that Jackie Shandu was incarcerated without a warrant of arrest on level 1 charges, an attempt to silence those who are critics of skewed racial power relations. It is clear that there was political pressure to arrest hence the intent to add charges retrospectively,” Mthethwa

A petition started on Monday, calling for bail to be denied on the basis that Shandu allegedly uses an alias and is a potential flight risk, has about 2,000 signatories. The petition also urges affected parties to submit statements to the senior public prosecutor.

Meanwhile, Shandu’s appearance comes amid the expected appearance of three men arrested in connection with murder in Phoenix during the recent unrest.

Dylan Govender, 29, Ned Govender, 30 and Jeetendra Jaikissoon, 39, who appeared in the Verulam magistrate’s court on Friday, were remanded in custody until Tuesday for formal bail applications.

Their appearance in court last week was marked by a tense situation outside as police and army kept an eye on supporters of the accused, family and friends of murder victims as well as groups calling for justice in connection with killings in Phoenix during the recent unrest.

The court appearances and tension come as police minister Bheki Cele and KwaZulu-Natal premier Zikalala will hold a briefing on matters relating to the Phoenix violence on Tuesday.

National youth task team (NYTT) member Sizophila Mkhize says she is yet to be served with formal communication regarding disciplinary action over ...
Politics
1 year ago

Jackie Shandu, the convener of a coalition of civic groups that marched to Durban City Hall on Thursday, has retracted his 'problematic remarks'.
News
1 year ago

The son of a prominent Phoenix pastor is being investigated by police for allegedly being in possession of some of the 1.2-million rounds of ...
News
1 year ago