Duduzile Zuma-Sambudla has been accused by some of inciting violence. File photo.
Image: Thapelo Morebudi/Sunday Times

Social media network Twitter has taken action against former president Jacob Zuma’s daughter Duduzile Zuma-Sambudla after she shared clips of the violent protests and looting in KwaZulu-Natal on her account.

On Monday, Twitter users who reported Zuma-Sambudla for sharing the clips received a notification from the app confirming she had violated the app’s rules.

The videos and images she shared were taken in several areas in the province before the unrest and looting broke out in Gauteng. 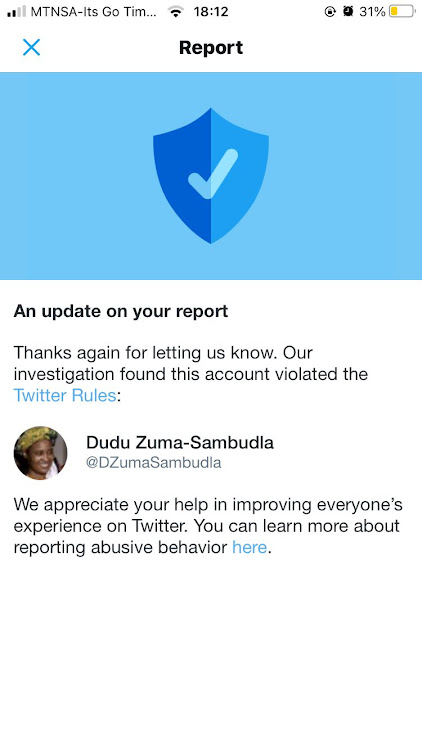 According to Twitter’s rules, the complaints against the clips shared by Zuma-Sambudla may fall under “terrorism/violent extremism”.

TimesLIVE looked through Zuma-Sambudla’s account and found the videos have not yet been removed.

One image she shared on July 9 was flagged by Twitter, saying it was “presented out of context”. The original image is from 2020, according to Africa Check and BBC News Africa.

Zuma-Sambudla has not commented on the reports levelled against her.

The platform did not give reasons behind the suspension of his account.

Before the account’s suspension, Malema had called for EFF supporters to oppose the deployment of soldiers in areas affected by violent protests and looting.

According to the Cybersecurity Act, any person who unlawfully makes available, broadcasts or distributes, using a computer system, a data message to a specific person, group of persons or the public with the intention to incite violence, or call people to be involved in the destruction of any property belonging to people, is guilty of an offence.

The act states those who engage in such acts will be liable for criminal offence and can receive a fine or be sentenced to imprisonment for a period not exceeding three years.

Jacob Zuma’s spokesperson Mzwanele Manyi says the former president is having 'very serious issues' in prison, and his incarceration is taking its ...
Politics
6 months ago

The DA says it will lay a complaint of incitement of violence against EFF leader Julius Malema and former president Jacob Zuma's children, Duduzane ...
Politics
6 months ago