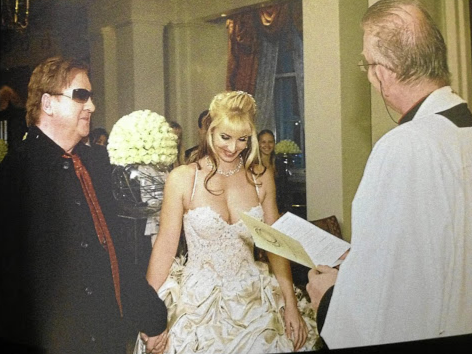 Insurance billionaire Douw Steyn and Donne Botha at a ceremony in London in 2007. The high court in Durban has dismissed a claim instituted by Botha against Steyn. It held that there was no marriage between the two.
Image: Supplied

There was no marriage between insurance billionaire Douw Steyn and Donne Botha, the high court in Durban ruled this week as it dismissed a claim instituted by Botha.

Botha made these claims as she believed she was married to Steyn — but the billionaire disputed that they had been married.

According to Botha, they met in September 2005 and became engaged that year.

In April 2007 an agreement was signed by the parties wherein proprietary issues were dealt with in the event the parties finally got married. In the meantime, Steyn and Botha lived together, travelling between London and SA, the high court said in its judgment passed on Monday.

On August 18 2007, the couple hosted a ceremony, which was meant to be a wedding ceremony at The Lanesborough, a hotel in London.

Invitation cards were issued, family and friends of Botha were flown from SA to London at Steyn's expense. A wedding planner was on standby in London. A wedding dress was made by top London designers. All the guests were housed in London at the expense of Steyn.

According to Botha, they exchanged rings at this ceremony.

However, the wedding was not registered — and Botha said the reason for this failure was that such a registration could not have happened at short notice, as two weeks was required to get a licence.

Botha testified that the information she had received from Steyn was that this was a matter of simply the signing of the register when they got back to SA as they were both South African.

When they returned to SA, they stayed together until Botha walked away from the relationship in 2009.

In November 2014, Botha started the litigation in this matter.

After pretrial proceedings, the matter was finally heard for three days in November last year.

Whenever she found herself trapped in the web of her inconsistencies, she pleaded duress or lack of capacity, for which she has nothing to show.

In disputing that there was a legal marriage, Steyn said the London “wedding” event was only a “blessing ceremony”.

A lawyer from England, Adrian Christmas, testified in court that his understanding was that in the UK a priest conducting a wedding ceremony has an obligation to complete the certification.

Where a non-religious ceremony has been undertaken, at a registry office, one of the two registrars must be present and either of them has the duty to obtain the certification, Christmas said.

He testified that both Botha and Steyn understood that they were not married.

Another witness for Steyn, legal expert Janet Kentridge, testified that on the facts of the case, there was no marriage between the two under English law.

In dismissing Botha's application, judge Khosi Hadebe said the evidence gave a clear indication of the lengths Botha was prepared to go to for her to be found to have been married to Steyn.

“She dismally failed to achieve this. The least said about her as a witness, the better,” Hadebe said.

She said Botha was argumentative throughout her testimony.

“She avoided answering questions directed at her. She insisted on making empty, unsubstantiated allegations.

“As was observed by counsel for [Steyn], whenever she found herself trapped in the web of her inconsistencies, she pleaded duress or lack of capacity, for which she has nothing to show,” Hadebe said.

From building their own cities to plotting to conquer space, Elon Musk, Jeff Bezos and Douw Steyn have a lot in common with movie bad guys
Lifestyle
2 years ago

The divorce between Bill Gates and Melinda French Gates, co-founders of one of the world’s largest private charitable foundations, was finalised on ...
Lifestyle
1 month ago