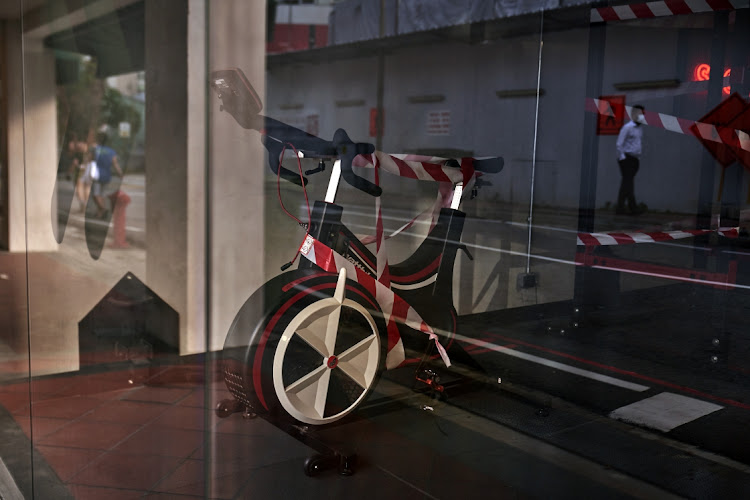 An exercise bike is wrapped in barrier tape in the window of a closed gym in the Chinatown area of Singapore, on Tuesday, Aug. 3, 2021. Daily virus case counts in Singapore have stayed well above 100 since July 19, after an outbreak at a fishery port led government officials to reimpose tighter Covid restrictions.
Image: Lauryn Ishak/Bloomberg

SA recorded another 423 Covid-19 deaths and 13,264 cases in the past 24 hours, the National Institute for Communicable Diseases said on Wednesday.

The government says the reintroduction of the social relief of distress grant is a stepping stone towards a basic income grant, and that those eligible can begin applying as soon as Friday.

Social development minister Lindiwe Zulu made the remarks during a media briefing on Wednesday.

She said the grant — which was announced by President Cyril Ramaphosa in the wake of economic devastation caused by Covid-19 lockdown level 4 and violent civil unrest — was the government's commitment to “cushioning the poorest and distressed in our country” amid the pandemic.

Wanted: private detectives who can pass as tourists to help stop illegal raves on the Spanish party island of Ibiza.

Successful applicants will be aged from 30 to 40, and able to blend in with partygoers. Their task will be to find out when and where parties will take place, and tip off police.

The Mediterranean island's authorities are looking for help after a spate of raves and parties that are being held partly responsible for a surge in Covid-19 cases.

WHO calls for moratorium on Covid-19 vaccine booster doses

The World Health Organisation's head Tedros Adhanom Ghebreyesus said on Wednesday the WHO was calling for a moratorium on Covid-19 vaccine boosters until at least the end of September.

WHO calls for moratorium on Covid-19 vaccine booster doses

Teacher unions have advised schools that are unable to comply with reduced social distancing in classes to follow the deviation provisions contained in the Government Gazette and to continue with rotational time tables.

The unions said on Wednesday they were puzzled to see the department of basic education planned to approach the cabinet with a request to reduce social distancing in primary schools from 1m to 0.5m. They have subsequently demanded an urgent meeting with the department.

More than 68,500 prison inmates have been vaccinated

More than 68,500 prison inmates have received their Covid-19 vaccine jabs, the department of correctional services (DCS) said on Wednesday.

Correctional services officials are not being left behind, with 12,328 vaccinated to date.

More than 68,500 prison inmates have been vaccinated

Healthcare services will continue to feel the effects of the recent riots, violence and looting in KwaZulu-Natal and some parts of Gauteng even as efforts to rebuild begin.

“The vulnerable population, poor communities, refugees and other marginalised populations will bear the brunt of the violent protests,” said Brenda Kubheka, managing director and co-founder of Health IQ Consulting, which provides risk management and clinical ethics services to the health sector.

The government coronavirus task force said 790 people had died of coronavirus-linked causes in the past 24 hours, pushing the national death toll to 161,715.

The federal statistics agency has kept a separate count and has said Russia recorded around 290,000 deaths related to COVID-19 from April 2020 to May 2021.

Australia's New South Wales reported one of the country's youngest deaths from Covid-19 on Wednesday, as daily infections lingered near a 16-month high despite the lockdown of 5 million people in state capital Sydney entering its sixth week.

The unnamed man in his 20s, who had no underlying health issues and was unvaccinated, died at his home in the city, authorities said. He deteriorated rapidly after earlier complaining of just mild symptoms, they added.

The death highlights the risk facing Australia's largest city, which is struggling to contain an outbreak of the highly infectious Delta variant when fewer than 20% of Sydney's residents are vaccinated.

The Biden administration is preparing to offer coronavirus vaccines to migrants in US custody along the Mexico border, the Washington Post reported on Tuesday.

Under the broad outlines of the new plan, the Department of Homeland Security will vaccinate the migrants soon after they cross into the US and await processing by US Customs and Border Protection, said the Post, which cited two unnamed DHS officials.

Until now, only a limited number of migrants have received the vaccine while held in longer-term US Immigration and Customs Enforcement detention facilities, the Post said.

Dubai's state airport operator expects a "surge" in passenger traffic over the coming weeks and months, its chief executive said on Wednesday, after the United Arab Emirates announced an easing of travel restrictions from African and Asian countries.

The Gulf state, a major international travel hub, on Tuesday said it would scrap on Aug. 5 a transit flight ban which Emirates airline later said applied to passengers travelling from 12 countries, including major market India.

The UAE will also lift this week an entry ban on those who had visited India, Pakistan, Sri Lanka, Nepal, Nigeria or Uganda over the past 14 days for those with valid residencies and who are certified by Emirati authorities as fully vaccinated.

Biden tells Florida, Texas leaders: Help on Covid-19 or 'get out of the way'

US President Joe Biden on Tuesday urged Republican leaders in Florida and Texas - home to roughly a third of all new US Covid-19 cases - to follow public health guidelines on the pandemic or "get out of the way" as the country struggles to contain the rapid spread of the disease's Delta variant.

Japan's health minister on Wednesday signalled the government may consider rolling back a controversial new policy asking Covid-19 patients with less serious symptoms isolate at home rather than going to the hospital.

The comment, which came amid rising criticism over the policy, underscores Tokyo's struggle in dealing with a spike in Delta variants that is overshadowing the Olympic Games.

Prime Minister Yoshihide Suga said on Monday only Covid-19 patients who are seriously ill and those at risk of becoming so woud be hospitalised, while others isolate at home, a shift in policy some fear may lead to an increase in deaths.

Health Minister Norihisa Tamura defended the policy shift, saying that by asking people with less serious symptoms to isolate at home, Japan could ensure it did not run out of hospital beds for people in need of intensive care.

"The pandemic has entered a new phase ... Unless we have enough beds, we can't bring people into hospitals. We're acting pre-emptively on this front," Tamura told parliament.

"If things don't turn out as we expect, we can roll back the policy," he said, adding that the policy shift was a move to deal with the unexpectedly fast spread of the new variant.

The outcry is another setback for Suga, who has seen support plunge due to his handling of the pandemic ahead of general elections to be held this year.

New York City will become the first major US city to require proof of Covid-19 vaccination at restaurants, gyms and other businesses, Mayor Bill de Blasio said on Tuesday, as the nation grapples with the rapidly spreading Delta variant.

With vaccines widely available, political leaders were combating the latest surge in infections with shots and masks rather than ordering businesses to close and Americans to stay home as they did last year.

The US Centers for Disease Control and Prevention on Tuesday issued a new 60-day moratorium on residential evictions in areas with high levels of Covid-19 cases, despite a Supreme Court ruling in June suggesting that such a move would require Congress to pass new legislation.

The gambling hub of Macau has launched a test programme for its 600,000 people after the Chinese-ruled city confirmed four new coronavirus cases on Tuesday, its government said in a statement on Wednesday.

Macau has set up 41 nucleic acid testing stations across the city which will run non-stop for at least three days, which is the estimated required period, the statement said. Appointments would not be required, it said.

Macau has registered only 59 coronavirus cases and recorded no deaths so far, according to Hong Kong government data.

In a separate statement, Hong Kong's government said it removed Macau from its list of places from which residents could return to the finance hub without the need for quarantine. That 'Return2HK' list now only contains places from mainland China.

Estimates suggest that most primary schoolchildren lost between 70% to a full year of learning since March last year. It is the same as saying the average grade 3 child in June 2021 has the same learning outcomes as the average grade 2 child in June 2019. In May 2021 the total number of seven- to 17-year-olds who had not attended school once this year was between 650,342 and 753,371.

These worrying statistics are contained in the latest National Income Dynamics Study (NIDS)-Coronavirus Rapid Mobile Survey (CRAM). It is against this backdrop that the move to bring back all primary school pupils and those attending special-needs schools on a full-time basis must be roundly applauded and welcomed.

Education experts agree that having pupils attend class on alternate days and even alternate weeks has been a disaster. Basic education minister Angie Motshekga has also expressed the strong desire to “curtail” rotational classes in primary schools “so that we can consolidate and give them the necessary foundation because if things go wrong, then it’s going to be very difficult to recover in later grades”. She acknowledged that “the damage happens in primary school and if we can’t save that, we have a big problem”.

But the drive to bring back all primary school pupils should not be done at all costs and it should certainly not compromise Covid safety regulations. It should be remembered that rotational classes were implemented in the first place because schools could not accommodate all pupils as they had to be at least 1.5m apart from each other in the classroom.

EDITORIAL | Schools must go the distance before they reach full capacity