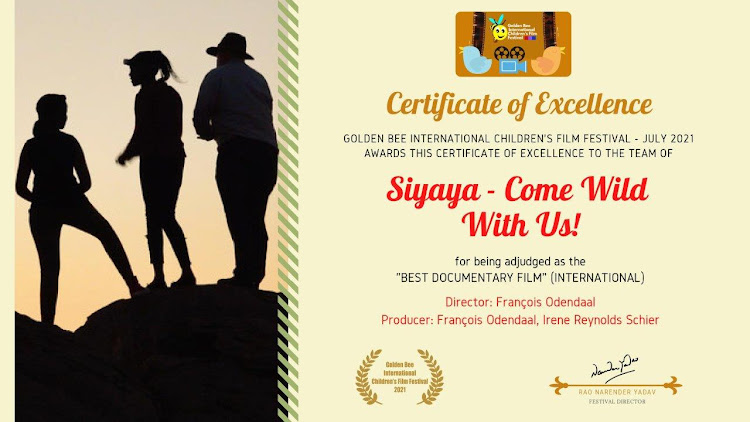 A South African children's TV series, designed to instil curiosity in the young viewer to know more about the natural world in a fun-filled way, has won an international award.

The “Siyaya – Come Wild With Us” series walked away with the highest acclaim - best documentary - at the Golden Bee International Children’s Film Festival held in New Delhi, India, last month.

Bridging the gap between young children and nature, the series was chosen as the category winner for outstanding children’s documentary.

“How can we expect future generations to care about nature, our wild places and the beautiful creatures in them, if they don’t have the opportunity to learn to love nature,” said Dr Francois Odendaal, renowned biologist and director of the series.

Rao Narender Yadav, the festival director, said the series had all the elements of an invigorating experience.

Yadav called the series “a fascinating visual treat for all, putting children in the lap of nature, exploring, learning and most importantly, understanding nature.”

The series was made possible by a collaboration of partners including SA National Parks, CapeNature and Wesgro, the tourism, trade and investment promotion agency for Cape Town and the Western Cape.

SANParks acting CEO Luthando Dziba said it was proud to have been part of jointly creating and producing Siyaya from its inception 10 years ago.

“We believe in fostering a prosperous, environmentally conscious nation, whose people are in harmonious coexistence with the natural environment and derive lasting benefits from its rich biological diversity,” Dziba said.

The CEO of CapeNature, Dr Razeena Omar, said she immediately saw the potential of the series as a means of connecting children of today and future generations with the natural world.

“Siyaya awakens the sense of exploration of nature’s treasure trove in our children, leading them to a will to protect and love our natural environment.

“It opens up an array of possibilities in which they can see themselves becoming scientists, explorers and conservationists,” Omar said.

Yaw Peprah, Wesgro’s acting CEO, said the award was a feather in the cap of the local film sector, highlighting on a global stage the world-class skills and locations available for filming in Cape Town and the Western Cape.

“We are immensely proud of the Siyaya team and look forward to seeing how the popular series evolves,” Peprah said.

The documentary series has been shown in well over half of the world’s countries and can be seen locally on multiple platforms, from SABC2 to the Mindset Network on DStv. It is also available on video on demand platforms like Showmax.

The fifth season will premiere on October 6 on SABC2, where it will be aired every Wednesday at 4pm.

The first three seasons have already been licensed by prestigious networks such as National Geographic, SANParks said.

‘Devilsdorp’ killers: Six bizarre details that didn’t make it into the doccie

“When we found it, we had goosebumps and just started jumping around. While we were excited to find these chameleons still clinging to survival, we ...
News
1 month ago

All Romario Valentine wants for his 10th birthday is to help provide a safe haven for endangered African grey parrots and to plant trees to save the ...
Lifestyle
2 months ago