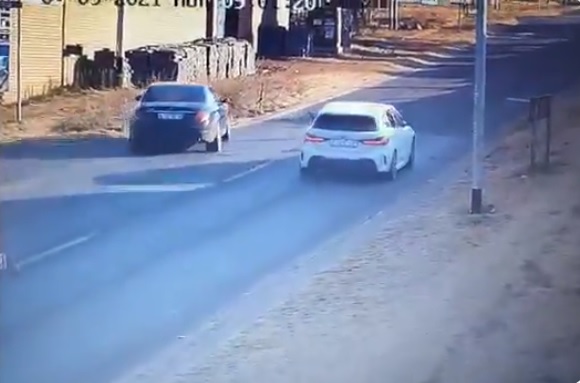 In a video doing the rounds on social media, a person travelling in a black Mercedes-Benz can be seen trying to get away from the occupants of a white BMW 1 Series.
Image: Screengrab of video

Gauteng police have arrested one person after a man was ambushed and attacked in Erasmia, Tshwane, on Monday.

In a video doing the rounds on social media, a person travelling in a black Mercedes-Benz can be seen trying to get away from the occupants of a white BMW 1 Series.

The black Mercedes then goes off the road and crashes into a post.

The men in the white BMW get out and start kicking and throwing rocks and bricks at the vehicle.

A man is later filmed lying on the ground being attacked and kicked.

Other vehicles stop and occupants check to see what is happening.

Police spokesperson Capt Mavela Masondo said shortly after the incident was reported to the SAPS, a vehicle fitting the description of the suspects was spotted in the Johannesburg CBD.

One suspect was arrested and a firearm believed to have been used in the shooting incident was recovered, Masondo said.

“The motive behind this incident is still unknown.”

The man was taken to hospital.

A case of attempted murder was opened at the Erasmia police station.

Child dies, others hurt as driver with weapons flees police in Joburg CBD

Police arrested a man and confiscated four firearms, including an AK-47 rifle, after a high-speed chase which resulted in the death of a child.
News
2 months ago

The body of a 64-year-old taxi chairman was found with multiple gunshot wounds in Thwalikhulu in the Eastern Cape at the weekend, police said.
News
2 months ago