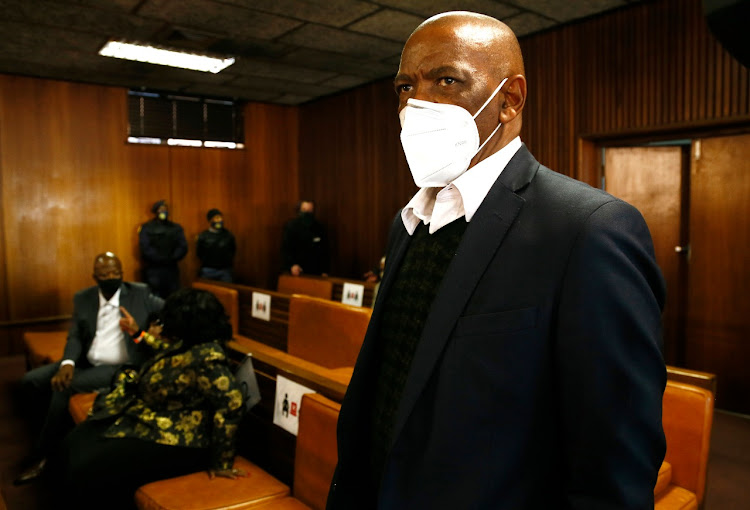 Suspended ANC secretary-general Ace Magashule and 15 other co-accused appeared in the high court in Bloemfontein on August 11 2021 over the R255m asbestos tender.
Image: Felix Dlangamandla/Pool

The pretrial of suspended ANC secretary-general Ace Magashule and 15 others was  postponed on Wednesday to October 19 by the high court in Bloemfontein.

Magashule and his co-accused face charges relating to R255m tender fraud from 2014 when he was premier of the Free State. The multimillion-rand tender was for the removal of asbestos roofing in houses in the province.

During the proceedings, a tug-of-war played out over whether Magashule’s former personal assistant Moroadi Cholota would testify on his behalf or would stand as a state witness.

Advocate Laurance Hodes, for Magashule and his co-accused Edwin Sodi, submitted that the state had drafted a statement on her behalf but she was yet to sign it, dismissing her as a “so-called star witness”.

“They have not secured her as a witness,” Hodes told the court.

He said it was stated in Magashule’s bail conditions that he not make contact with Cholota going forward.

“We believe this is factually incorrect because we had already had a statement from her as a defence witness,” Hodes said, adding the state was aware of this.

“We have a statement from her predating her appearance before the [state capture] commission, which they do not,” Hodes said.

He told the court they planned to bring an application challenging the legality of Magashule and Sodi’s testimony before the state capture inquiry used against them in the trial.

The state contended the case was not based on this information.

Businessman Edwin Sodi has been named in a report of an independent commission of inquiry into a 16-year-old contaminated water crisis in ...
Politics
9 months ago

“The Zondo commission is nice to have, but this case is not based on evidence before judge Raymond Zondo. That does not say we are not going to use it,” said prosecutor Johannes de Nysschen.

Regarding Cholota, he said the state had the first say when it came to witnesses.

He said she had made a statement with her lawyer, had given evidence to the commission and had given a statement which is yet to be signed, but these were all sworn statements.

De Nysschen said whether Cholota would be a state witness, defence witness or witness of the court could be determined later, even through a trial-within-a-trial.

Abel Kgotso Manyeki, who represents the company Ori Group, told the court he had dropped his legal representative and would apply for a Legal Aid lawyer.

Regarding the issues raised by Hodes, the court ruled these matters would be attended to by the judge appointed to see the matter into trial.

All of the accused are out on bail.

Suspended ANC secretary-general Ace Magashule has accused the high court in Johannesburg of "actual and/or perceived bias" in its judgment that ...
News
9 months ago

Suspended ANC secretary-general Ace Magashule is taking the NPA to court for allegedly failing to hand over his full indictment in the R255m asbestos ...
News
9 months ago

ANALYSIS | Have Ace Magashule and the RET brigade played their last hand?

On Friday, the Johannesburg high court ruled that Ace Magashule’s suspension was lawful and constitutional
Politics
10 months ago