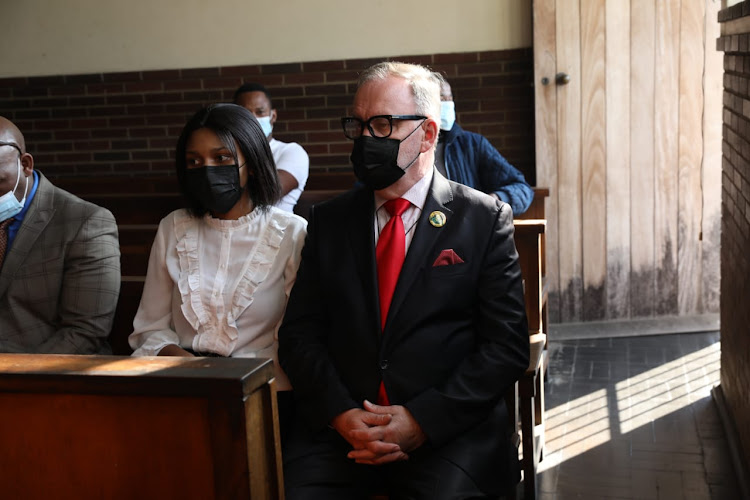 Niehaus was arrested last month for allegedly breaking lockdown regulations after he and a group of ANC members and supporters gathered outside the Estcourt prison where Jacob Zuma was incarcerated.

The Umkhonto we Sizwe Military Veterans Association (MKMVA) spokesperson was expected to pay a R3,000 fine by August 6 or appear in court.

Niehaus posted on social media that he intended to fight the case.

“I will show you I am not a coward by taking the NPA (National Prosecuting Authority) head-on tomorrow in court in Estcourt for wrongful arrest, and that the Covid-19 protocols are being abused to undermine the constitution and to repress freedom of speech. I will be in court fighting.”

Director of Public Prosecutions KwaZulu-Natal spokesperson Natasha Kara said the matter was postponed to November 22 to 26 for trial.

Speaking outside the courthouse after the postponement, Niehaus reaffirmed his dedication to the ANC. He said he “strongly believed” he was “illegally arrested” and detained for two hours at the Estcourt police station on July 8.

“I did not break Covid-19 regulations. I was addressing a one-on-one media interview. I want to be clear that the Covid-19 charges brought against me are trumped up charges and are intended to put fear into people to express their freedom of speech.

“I have fought for the freedom of speech and civil rights we have in SA. I spent 10 years in prison for those rights. I will not allow those rights to be eroded. I will not plead guilty to trumped up charges. I will resist this matter and fight it in court.”

Niehaus said his arrest should have been followed by the arrests of other politicians who allegedly broke Covid-19 regulations.

“Two days after I was arrested Zizi Kodwa [deputy state security minister] addressed a large crowd in Soweto. Similar meetings took place for police minister Bheki Cele and President Cyril Ramaphosa. When I say this it is not what-about-ism, it is about the principle of equality before the law.”

Also present at court on Wednesday were Niehaus’ supporters representing interfaith organisations and led by Bishop Sandile Ndlela of the United Methodist Church of SA.

Speaking before the case, Ndlela told TimesLIVE they had come to show support for Niehaus. He said the reason for Niehaus’ arrest is unclear to them.

“We were visiting former president Jacob Zuma on that day and unfortunately they were saying there were level 3 regulations violated. However, my worry is that the same people from government are addressing people during level 3. If it is Carl, it is a case. We don’t understand which is which.”

Nkosentshe Shezi, national chairperson of the RET Champions and a Niehaus supporter, said they criticised the contingency of police and soldiers deployed to the courthouse and took a swipe at Ramaphosa.

“As the son of a domestic worker, I could not afford expensive bodyguards, but President Ramaphosa, wherever I go today I see myself followed by men in uniform carrying machine guns.

“I don’t know if they are my bodyguards but I thank you, Cyril Ramaphosa. Maybe this is your message to us to say you love us enough to give us soldiers who will watch over us,” said Shezi

Heavy police presence on Albert Street outside the courthouse@TimesLIVE pic.twitter.com/PHNioJo45a

The #FreeJacobZuma movement on Wednesday announced a multipronged strategy to demand the release of the embattled former president.
Politics
1 year ago