Fish and livelihoods poisoned by KZN chemical spill during unrest

Rights groups and fishermen say they are looking into legal action, but holding anyone to account is complicated 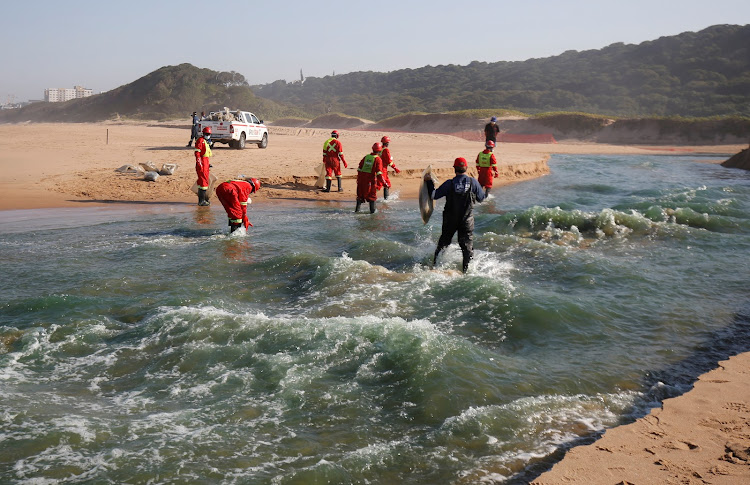 Members of a hazardous waste cleanup crew collect dead fish on July 17 2021 after chemicals entered the water system from a warehouse which was burned during days of looting in Durban.
Image: REUTERS/Rogan Ward

No sooner had the looting stopped than fisherman Bobby Pillay gathered up his rod and bait, desperate to venture out of hiding and get back to the SA seafront.

What he found was devastation.

The beach glistened with poisoned fish, hundreds of them lying inert on the wet sand, slick with chemicals.

“I have never seen a thing like this,” said 76-year-old Pillay from his home in Phoenix, a town north of central Durban that was badly hit by July's riots.

“This is devastating for us, on top of lockdown, this just adds fuel to the fire,” he said, holding up a local news clipping about the spill.

The cull came after looters — believed to have been spurred on by the arrest of former president Jacob Zuma — set fire to a warehouse owned by India's UPL Ltd.

It took more than a week to control the blaze and stem the slew of chemicals that ran off from the firefighting into nearby uMhlanga estuary.

UPL said it was “committed to making all efforts to eliminate [its chemicals] from the environment”, confirming the warehouse held a number of pesticides and fungicides that could cause skin, eye and respiratory irritation.

The company had no quick answers to more detailed questions posed by the Thomson Reuters Foundation.

While the true extent of the damage is not publicly known, hundreds of subsistence fishermen have seen the waters they have fished lifelong cordoned off, strangling incomes that were already crimped by repeated Covid-19 lockdowns.

Repeated attacks and the torching of a new warehouse in KwaZulu-Natal's Umhlanga area have sparked concerns of air pollution and toxic spills in the ...
News
10 months ago

Like Pillay, many of the fishermen are pensioners, surviving on a monthly government grant of about R1,900.

“This is a tragedy that should never have happened,” Desmond D'Sa, co-founder of the South Durban Community Environmental Alliance (SDCEA), an environmental justice organisation, told the Thomson Reuters Foundation.

The government had no immediate comment on the quality of the air and water post-fire, but a parliamentary presentation seen by the Thomson Reuters Foundation reveals that more than 3 tonnes of dead fish and crustaceans have already washed up.

It said 1,600 different substances were stored in the warehouse, and predicted the environment could take years to recover from the contamination.

A water test done by SDCEA soon after the spill revealed “a toxic soup” of hundreds of cancer-causing chemicals, said D'Sa.

As the public awaits greater detail about the risks, the fishermen, too, are in limbo.

“Fishing is a sport for the wealthy, but a livelihood for us,” said Pillay. “It is an honest living, but now we have nothing to bring home to our families.”

The arrest of Zuma in early July, for refusing to appear at an inquiry into high-level corruption, sparked protests that quickly evolved into widespread looting.

Screams, sirens and gunshots had echoed outside Pillay's door for a week before the chemical spill cut off his income.

While some looters were filmed driving in fancy cars to raid malls, many more were poor and jobless, their desperation heightened by unemployment hitting a new high of 32.6%.

Nor were consumer goods the sole goal — some looters sought chaos, setting fire to farms and food storage units, along with the hazardous chemical warehouse.

Beaches north of the Umgeni River up to Salt Rock remain closed as a precautionary measure after the spill that occurred when a chemical warehouse in ...
News
9 months ago

More than 300 people died in about a week of riots that caused billions of rand worth of damage, authorities say.

“These riots will have a ripple effect,” said Riaz Khan, chairperson of the KZN Subsistence Fisherfolk Forum, a charity advocating for fishermen and women in the province.

Those now unable to fish in the polluted areas have moved to other piers to the south, where fishermen say hundreds of anglers crowd together by night.

Though some are nervous of contamination, others are hoping the ocean current will simply wash away any health risks.

“We are facing a curfew, crowding, looting, lockdown and now pollution, but what choice do we have?” asked 63-year-old Ernest Lortan, holding his rod on Snake Park pier jutting into the ocean from Durban's popular surfing spot North Beach.

Emergency control measures such as blocking discharge points, pumping out contaminated water and using sandbags, were implemented by UPL, according to the parliamentary presentation.

But it also says sugar cane fields are likely to be contaminated, with toxicity results due in coming days.

Rights groups and fishermen said they are looking into legal action, though holding anyone to account is complicated.

A month later, the full impact on their businesses and food security is still to be determined
News
9 months ago

The SA Special Risks Insurance Association (Sasria), a state-owned insurer that covers civil unrest, said it does not typically cover consequential — or indirect — loss or damage.

“Looters and company directors should be held accountable for the impact on people's health and wellbeing, but also on marine life,” said D'Sa.

Khan from the KZN Subsistence Fisherfolk Forum said proper disclosure of what chemicals were stored could have led to better firefighting, with foam deployed instead of water.

UPL said in a statement that the fire and containment systems were “in ordinary circumstances” adequate to contain fire and chemical spillage.

But fishermen, whose families have lived off the ocean for generations, feel shortchanged.

“We need answers, we want to know the results from the water sampling and we need compensation for lost incomes,” said Khan as waves crashed beneath the North Beach pier.

“We want our basic human rights just like everyone else.”

Dead fish and crayfish washed up on the beaches of Umhlanga and Umdloti, north of Durban, have prompted a warning by the eThekwini municipality for ...
News
10 months ago

KwaZulu-Natal is in its third wave of Covid-19 infections, premier Sihle Zikalala confirmed on Sunday.
News
9 months ago

People in KwaZulu-Natal’s impoverished south coast towns were reeling after the devastation of the riots, but are hoping to forge a collective way ...
News
9 months ago