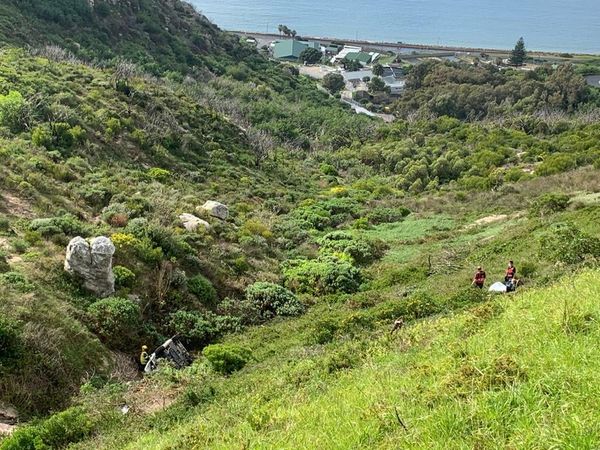 Medics on Wednesday prepare to airlift a woman, on the right, whose car fell into a ravine 100m below the road in Simon's Town on Tuesday morning.
Image: Cape Medical Response

A man who stopped at a viewpoint on the side of the road in Simon's Town to collect porcupine quills turned out to be a life saver for a woman whose car had fallen 100m into the ravine below.

The man pulled over on Wednesday and the woman managed to catch his attention. The accident took place on Tuesday about noon and the woman had spent the whole night in the open in the cold and rain.

As the man collected the quills where Redhill Road and Scala Road intersect, he heard a faint voice below crying for help. The man traced the voice and then spotted the car in the ravine.

He went down the mountainside, where he found the woman 40m from her vehicle.

Cape Medical Response said it had received a call at 9.35am on Wednesday from a member of the public saying he had spotted the vehicle in the ravine and that there was an injured person nearby.

CMR said it dispatched paramedics and an ambulance as well as the Metro Mountain Rescue Unit and Cape Town's fire and rescue service.

“On scene, we found a motor vehicle had left the roadway and was lying in the ravine about 100m below. Forty metres from the vehicle, we found the female driver lying on the mountainside,” CMR said.

Medics began treating the patient before she was airlifted to the roadway by Air Mercy Service SkyMed helicopter with the help of Metro Rescue and Cape Town's fire and rescue.

“It has been determined that the patient was missing since Tuesday and she reportedly went over the edge of the mountain at midday on Tuesday.

“It was by an absolute miracle that she was found by the caller who had stopped to pick up porcupine quills,” CMR said.

The woman was transported to a local Cape Town hospital by ambulance.

A 38-year-old man drowned after he fell into the water at the Port of Table Bay while working, the National Sea Rescue Institute said.
News
5 months ago

Death at a funeral: scenes of horror as church collapses in Haiti quake

The death toll has passed 1,400, with almost 7,000 injured after the devastating earthquake on Saturday
World
5 months ago

Three people were killed in an accident on Saturday on the N2 between Stanger and Zinkwazi, on the north coast of KwaZulu-Natal.
News
5 months ago