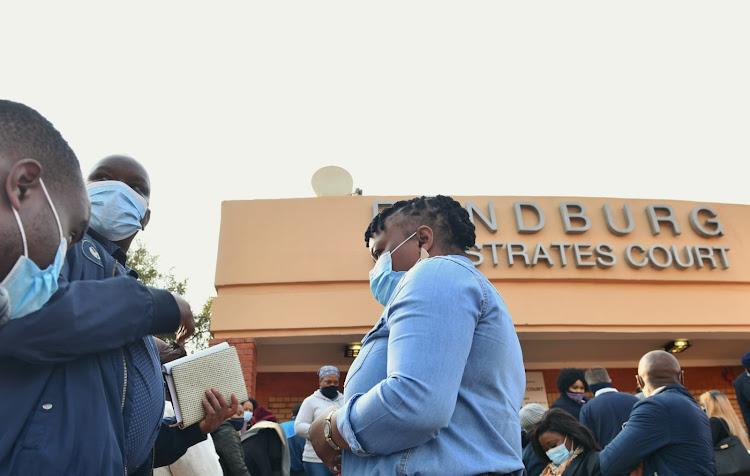 Slow-moving queues, preference being given to celebrities and victims of gender-based violence (GBV) being turned away.

These were some of the observations made by deputy minister in the presidency Thembi Siweya during an unannounced visit to the Randburg magistrate’s court.

Siweya visited the court on Monday after many complaints about the ill treatment GBV victims were receiving.

“We’ve been receiving complaints from last year on the presidential hotline. We’ve been observing them and today we decided to come to court to see what is happening. It was a surprise visit and the only person we informed was justice minister [Ronald] Lamola. I came here wearing civilian clothes so I could appear normal and stand in the line,” Siweya said outside the court.

She said she had gone to the court to verify the complaints received.

Apparently this is a popular court and if you are a celebrity you get more attention than an ordinary citizen. That needs to come to an end.

“The complaints were true. There are four lines to get into the court. The one for GBV did not move. It only moved when I arrived. I stood there for 15 minutes. I interacted with two or three people. Some victims are coming back for the second time, others are here for the first time.

“There seems to be confusion with communicating with GBV victims. Apparently they [officials] can only take a limited number of people a day,” said Siweya.

She said when she interacted with management there was no clear explanation why the queue servicing GBV victims was not moving.

“Our take is that the Batho Pele [people first] principles need to thrive and continue to happen. We need to give victims of GBV the necessary support they need.

“Management seemed to be shocked or overwhelmed. They did not seem confident and did not give answers to questions I asked. I was asking them why the line was not moving. They were telling me about Covid-19 and level 3. They shifted the blame to each other. One said they were on leave for three weeks and could not answer. They gave too many stories for not attending to GBV victims.”

Siweya said most of the cases received through the hotline had come from the Randburg magistrate’s court.

“Apparently this is a popular court and if you are a celebrity you get more attention than an ordinary citizen. That needs to come to an end. We came here to see what is happening,” she said.

The visit was to also affirm that when people interact with officials through the presidential hotline their complaints were addressed, Siweya said.

“We want to encourage South Africans to continue to talk to us through the presidential hotline so we can improve as government.

“President [Cyril ] Ramaphosa is committed to protecting the women of SA. He remains committed to ensuring the justice system works for victims of any violence.

“We do not need to victimise our victims again [when they go to court]. They must find comfort and confidence in our justice system. We are doing this so we can improve and alert the relevant political principals so they interact with their people in the department to tighten loose screws,” she said.

Nobody seems to be interested in finding out why we are here.

When TimesLIVE went to the domestic violence section of the court, a few women were waiting for service.

Five women who spoke to TimesLIVE said it was their first time at the court. None of them had a clue how the process of getting a protection order worked.

An officer of the court came and handed out forms to all the women. She told them what they were expected to write on the forms and left without making sure all of them, including an elderly woman, understood what they were required to do.

There was no interpreter to explain to those who would have a challenge filling out the forms, which are written in English.

“There is no-one giving us guidance about what to do or tell us what is going to happen. We were just given forms,” said one woman, who asked not to be identified.

“Nobody seems to be interested in finding out why we are here. If you are abused physically or verbally, will we get psychological help? We don’t know what to do.”

This Women's Month, a wave of news reports on gender-based violence and the rape and abuse of minors has demonstrated how often the plight of victims ...
Opinion & Analysis
5 months ago

The Commission for Gender Equality (CGE) has reacted to the murder of the University of Fort Hare student whose body parts were found in a bag this ...
News
5 months ago

I found both disappointing and chilling the announcement by newly appointed minister of health Dr Joe Phaahla that men have been hugely ...
Opinion & Analysis
5 months ago