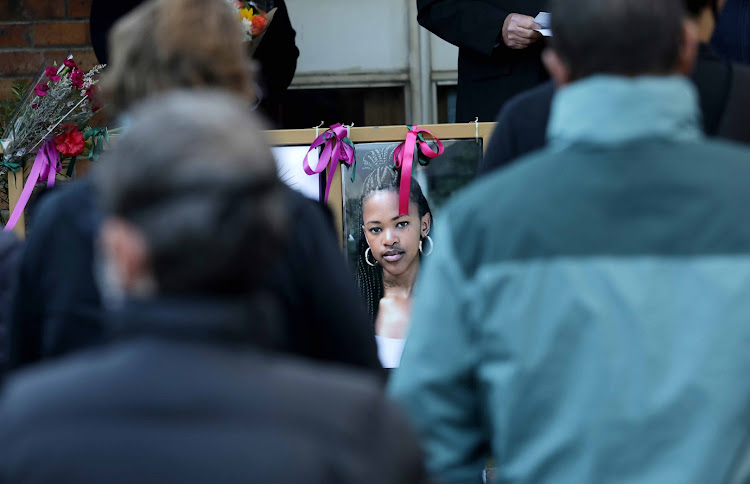 A cold wind and grey sky matched the mood of a memorial held outside the Clareinch post office in Claremont, Cape Town, on Tuesday evening.

​The crowd had gathered to commemorate the life of rape and murder victim Uyinene Mrwetyana, a University of Cape Town student who died on this day two years ago when she was 19 and in the first year of her studies.

When the memorial began at 5pm, the railings of the post office were already covered in ribbons, flowers and pictures of the young woman whose face has become synonymous with the fight against gender-based violence in the country.

A poster under a large photograph read: “Am I next?”

Commemorating Uyinene Mrwetyana who was murdered two years ago on this day at a Claremont post office in Cape Town. @TimesLIVE @UyineneMrwetya1 #GenderBasedViolence @antigbv_su pic.twitter.com/brODKNKKzP

We follow Uyinene Mrwetyana's final steps on August 24 2019 when she was brutally murdered in a Cape Town post office and then disposed of in a hole next to a railway track.

Mrwetyana, who had recently matriculated from Kingswood College in Makanda before travelling to the Western Cape, lived in a university residence not far from the post office.

On the sunny Saturday morning of August 24 2019, she headed out to collect a parcel but was told by clerk Luyanda Botha to return just as the post office was about to close.

She went about her other chores for the morning and returned by cab later that day.

She never returned to Roscommon House, the residence where she was staying, and for nine days after that, a desperate search unfolded.

Botha had raped her behind the counter at the post office before bludgeoning her to death with a weighted scale, and had then returned the next day to retrieve her body.

He had attempted to burn her but ultimately buried her in a shallow grave beside a railway track in Khayelitsha.

UCT student Uyinene Mrwetyana was murdered inside the Clareinch post office one year ago on August 24 2019. On Monday evening, dozens of families, friends and residents gathered outside the post office holding flowers, candles and home-made posters.

After her body was found and identified, the post office became festooned in flowers to mark her death and a spontaneous protest inside the post office led to it being temporarily shut down.

A year later, on the first anniversary, the post office was once again covered in flowers and ribbons.

Speaking outside the post office on Tuesday night, student Annah van Niekerk, said: “This happened really close to home, and it's important that everyone stand up for the hundreds of other cases that also happen. It's very empowering as a woman to be here and see so many people standing up against gender-based violence.”

UCT's Kate Christie slammed Botha for brutally ending Mrwetyana's life, saying that he turned her excitement at receiving a parcel of new clothing into a nightmare that, ultimately, claimed her life.

UCT vice-chancellor Prof Mamokgethi Phakeng on Tuesday urged everyone to do their part to counter sexual and gender-based violence, as the university ...
News
9 months ago

Numbed by crime, we must fight the urge to give up

In the early hours of Thursday morning, the body of Nosicelo Mtebeni, cut into pieces and shoved into a suitcase and plastic bags, was discovered in ...
Opinion & Analysis
9 months ago

This Women's Month, a wave of news reports on gender-based violence and the rape and abuse of minors has demonstrated how often the plight of victims ...
Opinion & Analysis
9 months ago