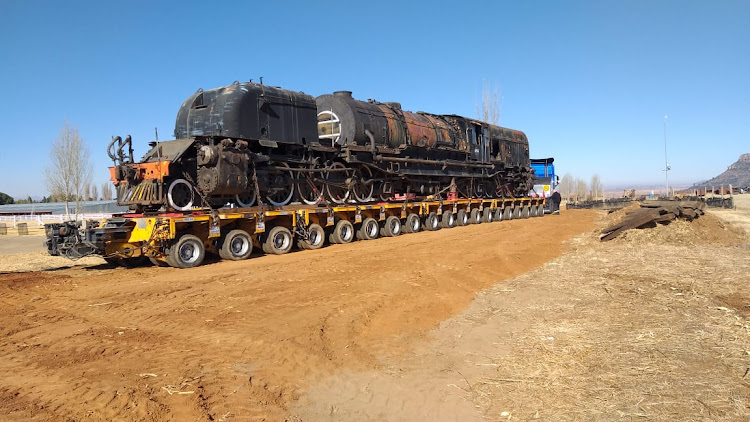 Motorists on the road between Bloemfontein and Ficksburg in the eastern Free State on Wednesday would have witnessed the spectacle of a 160-ton steam locomotive rattling eastward on the back of a 19-axle lowbed trailer.

The locomotive, one of four owned by the Sandstone Heritage Trust, a private collection of locomotives and vehicles based on a farm near Ficksburg, was heading to its new home on the farm after two decades of languishing outside Bloemfontein's former steam locomotive depot.

While Transnet's national collection of heritage locomotives and other rolling stock is kept at Bloemfontein behind locked gates, the four locomotives were outside the property and vulnerable to scrap thieves, said Sandstone marketing manager Dave Richardson.

“We felt the assets would be safer at the farm,`" he said.

With their copper pipes, brass controls and other valuable metal components, many of SA's surviving steam locomotives have been stripped for scrap by metal thieves in recent years. In 2013, locomotives owned by the now-defunct SA National Rail and Steam Museum, kept at unprotected sites near Krugersdorp, had to be scrapped after suffering irreparable damage at the hands of metal thieves.

Though there is an existing rail link between Bloemfontein and Ficksburg, moving the locomotives by road was an easier option.

“We didn't believe that the line between Bloemfontein and Ficksburg was really open for use,” said Richardson. “And even when we got to the farm, it's still 3km from the nearest siding. We would have had to have all these trucks anyway.”

While three of the four engines could be disassembled into more manageable components by separating the locomotive from its coal and water tender, moving the 30m-long GMAM-class Garratt locomotive presented the owners with a technical headache.

Garratts are articulated locomotives with the boiler and cab connected by pivots to an engine unit at each end.

After some minor delays with the traffic permits, GMAM 4114 finally got on its way.

To load the locomotive onto the special trailer involved laying rail tracks on a second, conventional trailer and using it as a ramp to winch the engine onto the lowbed.

“I believe this is the first time it's ever been done,” he said.

The convoy, which included multiple escort vehicles, took a full day to cover the 210km from Bloemfontein to the farm.

After missing the turn-off to the farm, the lowbed had to continue another 20km to Fouriesburg, where the road widened enough to allow it to turn around, Richardson said.

“The other locomotives went on conventional trucks,” he added.

Three of the four had been moved from Bloemfontein by Friday, with the remaining engine due to move next week.

Sandstone has no plans to restore and operate the four locomotives in the near future. While the farm has a 24km-long working railway, it is a different gauge to the 1,065mm gauge used by the four engines. 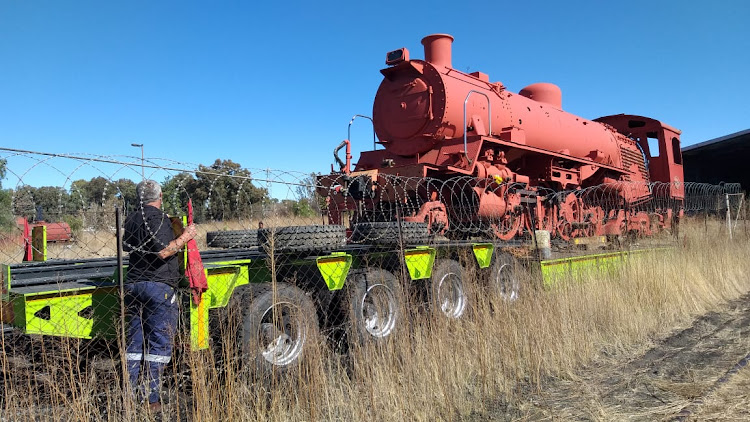 One of the three conventional engines is winched onto a lowbed in Bloemfontein for the journey to the eastern Free State.
Image: Sandstone Heritage Trust

Sandstone owns other mainline locomotives, which are now stored on a siding on the farm, as well as a former steam engine depot in Gauteng.

“We really don't have the wherewithal or even the motivation to run mainline trains,” said Richardson. “It's not our business. We are better self-contained on our two-foot (610mm) gauge and we are within the rules and regulations of the rail safety regulator.”

It was not impossible that one of the four locomotives, which is in operating condition, could be used by other heritage rail operators.

“We've had many enquiries. But it's a matter of cost and it's hard to say what the market value is on a lease or a purchase.”

Meanwhile, Sandstone's collection has expanded after the trust's decision to focus on narrow gauge operations. The collection, much of which is in working order, also includes vintage tractors, military vehicles, buses and earthmoving equipment, as well as a team of Afrikander cattle which is harnessed into a restored ox wagon on open days at the farm.

There is a little railway that climbs from the valley of the Umzimkulu River and weaves its way across rippling cane fields to Carisbrooke, then ...
News
1 year ago

'It’s been 10 years of backbreaking toil': Last toot toot of the steam engine

For the first time in 132 years, the sight and sound of a steam engine pulling a train across the Johannesburg landscape is no more. After almost ...
News
2 years ago