Young adults give vaccine rollout a shot in the arm 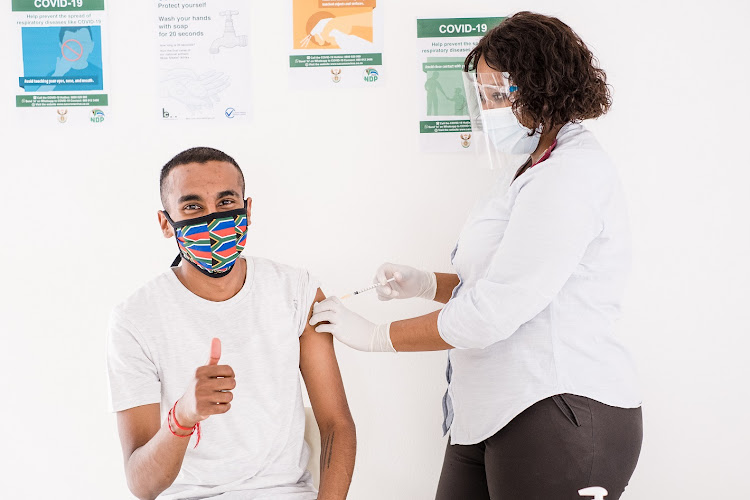 Younger people are flocking to get Covid-19 vaccines since they opened to all adults on August 20.
Image: BreadCrumbs

The enthusiasm among younger South Africans to be vaccinated has driven the daily numbers up again, with the average number of vaccinations topping 240,000 daily this week after the rollout opened to all adults, health minister Dr Joe Phaahla said on Friday.

“The response of the young people has been quite overwhelming,” said Phaahla.

“Even on the weekend, our numbers went much higher.”

The most populous provinces are leading the charge in giving younger adults shots: Gauteng has 158,000 younger adults inoculated, followed by the Western Cape with 106,000 and KwaZulu-Natal at 83,000.

I found both disappointing and chilling the announcement by newly appointed minister of health Dr Joe Phaahla that men have been hugely ...
Opinion & Analysis
5 months ago

Vaccinations are proceeding well since SA has a stable supply and the ability to deliver them to people, and there is an “appetite for people to receive vaccines”, said Phaahla.

Until vaccinations opened up to all adults, the numbers were lagging again across the country.

On Saturday SA will receive 2.2-million Pfizer doses donated by the US through Covax, in addition to the 5.6-million donation received in July.

“This will go a long way to reinforcing our stock,” said Phaahla.

By Thursday night the total number of vaccines given reached 11,648,000 and 5.45-million South Africans were fully vaccinated.

The minister said 850,000 more vaccinations had been given in the last week than the previous seven days. The last seven days have shown SA has the capacity to meet the 300,000 vaccinations per day target set by President Cyril Ramaphosa, he said.

The gap between men and women getting vaccinated narrowed this week, but there was still “a major gap to cover” among people over 35, said Phaahla.

He was critical of health professionals peddling fake news and fears about the vaccine, including a Cape Town cardiac surgeon whose opinions received publicity.

Phaahla said the government was “very reluctant to enter into” a mandatory vaccination policy but said it was being discussed in forums.

“We don’t foresee a national government regulation which says everybody must vaccinate. We wouldn’t really want to go that route,” he said.

However, mandates would be considered for people visiting restaurants, gyms, cinemas and workplaces.

Booster Johnson & Johnson vaccines — new research this week suggested they would be beneficial — are not a priority at this stage, Phaahla said.

“We have referred this to our vaccine ministerial advisory committee to advise us, but I must emphasise our priority at this stage is to make sure all adult South Africans willing to get the vaccines should get the dose as prescribed.”

The US Food and Drug Administration (FDA) granted full approval of Pfizer-BioNTech's Covid-19 vaccine on Monday, paving the way for greater public ...
News
4 months ago

Could I get more sick from Covid-19 if I smoke cigarettes?

Cigarette smoking increases the risk of more severe illness from Covid-19, which could result in hospitalisation, the need for intensive care, or ...
News
4 months ago

Everybody needs to commit to ‘social contract’ to save lives, says Africa CDC chief
Africa
4 months ago