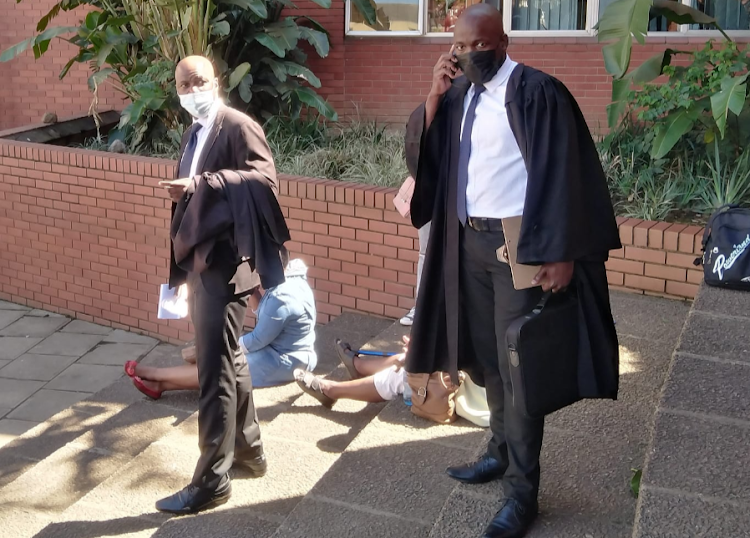 Defence attorneys Phumlani Fakude and Lindokuhle Dlamini say their client is well and they are confident he will be released on bail.
Image: Mluleki Mdletshe

A 35-year-old KwaZulu-Natal security guard made a brief appearance in the Pietermaritzburg magistrate's court on Monday for inciting public violence and arson.

This follows the burning of the Brookside Mall in Pietermaritzburg last month during civil unrest that claimed the lives of more than 330 people in KZN and Gauteng.

“These include inciting public violence and inciting arson. The charges relate to the incidents of looting and public violence that occurred in KwaZulu-Natal in mid-July, in particular, the burning of the Brookside Mall.”

She said the appearance was held in camera as an identity parade is yet to be conducted.

The man's attorneys, Phumlani Fakude and Lindokuhle Dlamini, told TimesLIVE that their client is well and they are confident he will be released on bail.

“We are fighting for him to be released on bail. He has no prior convictions, no history with crime. He works as a security guard at a local supermarket. He supports his family and children. We are confident our client will be granted bail,” said Dlamini.

The matter was postponed to September 6.

Two more people believed to have been instigators behind the riots in Gauteng and KwaZulu-Natal have been arrested for incitement to commit public ...
News
10 months ago

Fees Must Fall activist and alleged riot instigator Bonginkosi Khanyile spoke passionately in the Durban magistrate’s court on Thursday about how he ...
News
10 months ago

The lives of thousands of workers in KwaZulu-Natal who were already barely surviving have been upended, either by losing their jobs or having to ...
News
10 months ago