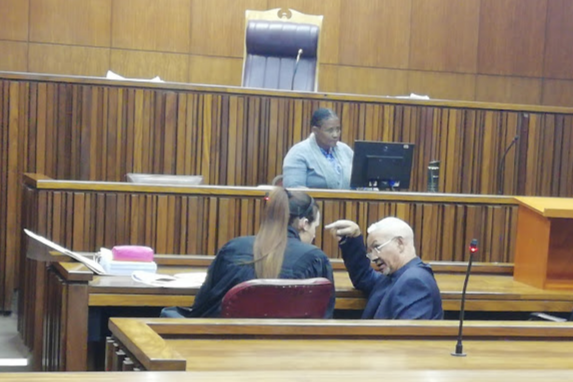 Former EMPD superintendent Adam Cummings consults with his lawyer prior to judgment in his human trafficking, rape and kidnapping criminal trial at the high court in Johannesburg. File photo.
Image: Supplied

The Teddy Bear Clinic for Abused Children has applauded the high court in Johannesburg for imposing a life sentence on a former superintendent at the Ekurhuleni metro police department (EMPD) for the rape and trafficking of Soweto children.

Adam Cummings, the former head of the EMPD security division, and his co-accused, Tebogo Johanna Maregele, stood trial from June 2018 on 14 charges including kidnapping, trafficking and rape after three reported incidents involving two teenagers and a nine-year-old girl.

The state claimed at the time that they kidnapped their targets in Soweto, took them to secluded areas to allow Cummings to sexually assault them and then tried to buy or threaten them into silence.

Cummings was found guilty on three counts of rape and one of human trafficking, while Maregele was convicted as an accomplice to the rape of a nine-year-old and on two counts of exploitation of children for sexual gain.

A former metro police superintendent has been convicted on three counts of rape and one of human trafficking, following a lengthy criminal trial that ...
News
2 years ago

The Teddy Bear Clinic's Shaheda Omar said: “We applaud this sentence. However, I think all courts and presiding officers must be consistent in their imposition of life sentences for this kind of exploitation of children and for any kidnapping or trafficking that children have been subjected to.

“We want to see this cycle of sexual exploitation come to an end we need to ensure that harsher measures are instituted in terms of no bail and no parole where children have been sexually exploited.”

Grace Langa, acting spokesperson for the Independent Police Investigative Directorate (Ipid), said: “It is alleged that between years 2010 and 2015 superintendent Adam Cummings from EMPD instructed Tebogo Maregele to recruit minor children around Soweto for sex in exchange of cash and food.

“Maregele would take children from nine years to 16 years and introduce them to Cummings. They would drive with them to Soweto cemetery ...

“On arrival at the cemetery, Cummings would show them his police badge and firearm, threatening them not to tell anyone. He would thereafter rape them. Both accused are to be added on the National Register for Sexual Offenders.”

The Independent Police Investigative Directorate is probing an allegation of rape against an Eastern Cape police officer accused of violating a ...
News
4 months ago

Dad jailed for raping his daughter two decades ago

A 61-year-old father is in jail for raping his biological daughter, who was 15 years old when he violated her.
News
5 months ago

A six-year-old girl was allegedly raped by a church caretaker on the West Rand at the weekend, Gauteng police said on Monday.
News
5 months ago